The good news is that it will still be around after the new Golf 2 is launched”. So read the 1984 edition of The VW Times at the launch of the Citi Golf in South Africa. They were a bit pessimistic weren’t they? Golf 6 has just been launched and it’s only now, 25 years and 377 000 units later, that the iconic dinosour many of us cut our motoring teeth on, is being put out to pasture.

Even though it still sells roughly 1 000 units a month, time, technologyand new legislation has caught up with the Citi Golf.

The last one rolled off the Uitenhage line on 2nd November.

It’s probable replacement will be the Volkswagen Gol, built in Brazil. The Citi Golf production line in Uitenhage now builds the VW Polo, predominantly for the export market.

HISTORY OF THE CITI GOLF

From 1984 to 2009, the Volkswagen of South Africa production plant in Uitenhage produced 377 484 Citi Golfs, a figure which surpassed Beetle’s record of 288 384 units produced over 28 years at the same plant.

This is an overview of the key events in the history and evolution of the iconic Citi Golf in South Africa: 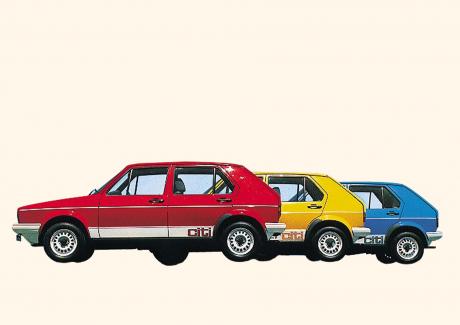 1985:VWSA partners with the National Road Safety Council and Caltex Africa on School Driver Education Programme. 26 Citi Golfs are donated to the programme.

New colour is added into the Citi Golf range, black with white accents.

1987:Citi Golf logo on the rear door is changed.

4-speed automatic transmission is added into the range.

1988:Citi Golf Sport with a 70kW 1.8 litre engine is introduced and it comes with a 5-speed manual transmission.

1989:Air conditioner and immobiliser system are added to the Citi Golf range and are offered as an option.

1990:Citi Golf CTi is launched to reincarnate the spirit of the Golf GTi 1. It is powered by high-torque fuel injected 82kW engine with a top speed of 180km/h. It sprints from 0-80km/h in just over 6 seconds.

1992:Citi Golf Shuttle, the cheapest model in the range is introduced. It is only offered in two colours – Red and White.

1994:To celebrate the 10th anniversary of the Citi Golf, a limited edition 1.6 litre Citi Golf Ritz is introduced.

Chico range gets 5-speed manual transmission as well as an upmarket derivative, 1.6 Chico Lux with quad headlights and alloy wheels.

1998:Special Edition, Bafana Bafana is introduced to pay tribute to the success of the soccer national team.

1999:Fuel injected engines, 1.4i (62kW) and 1.6i (74kW) are introduced. They are accompanied by upgraded brakes, new exhaust system and externally mounted fuel pump. Chico models retain the carburetor fed engine as an option.

Citi Golf Life 1.6i is introduced and it comes standard with CD/radio and 4-speakers.

2000:Citi Golf.com with a 1.4i engine is launched and it comes with a warning buzzer for lights, fuel and oil.

2001:CAR magazine survey revealed that Citi Golf had the lowest cost of ownership (based on the sample basket of parts for service items, mechanical parts and repairs for accidental damage) in comparison to other cars in its segment.

Citi Golf Rhythm 1.4i with alloy wheels, radio/CD/MP3 player as standard is introduced.

A record 28 550 units are sold – the best-ever sales figure in the history of Citi Golf.

Citi Plus short term insurance for Citi owners is introduced in partnership with Alexander Forbes.

1.4i Citi Wolf is unveiled at the Johannesburg Motorshow. The 62kW Citi Wolf came standard with features such as sports suspension, sporty grille, gun-metal alloy wheels and tinted glass.

2009:1.4i Citi Xcite is added into the Citi range for the sound aficionados. The sound package is developed jointly with Lightning Audio, a subsidiary of Rockford Fosgate. It consisted of 2-way door mounted speakers, an amplifier and sub-woofer.

Greatest technology advancement is achieved with the Citi as the driver airbag is fitted as standard across the range.

Citi Mk 1, a limited edition of 1000 Citi’s is produced to mark the end of production of the Citi.