A tired cliche surfaces when reviewing cars endowed with anything resembling ‘classic’ status or a lengthy tour of duty, and the CitiGolf is doubly qualified. It goes along the lines of ‘it’s touched the hearts and lives of so many South Africans’ or the similar ‘you’re bound to have owned one or known someone who has’. Sigh. In the case of SA’s beloved CitiGolf, it’s a tragic understatement.

In the last 25 years more than 370 000 Citis have been produced and sold locally, so true enough very few car owners haven’t had one on their driveway at some point. My driveway included.

Despite a presence in modern showrooms, the Citi recalls the pioneering days for mass-produced front-wheel drive cars, and structurally harks back to heady times of design freed from NCAP safety ratings and increasingly obese kerb weights. No surprise that this ‘final release’ iteration of the re-released Mk1 Citi (ours is numbered 084 out of 1000) still only tips the scales at a sprightly 858kg

It achieves this feat by ignoring all the safety equipment now obligatory on modern cars. The only concession to crash safety, apart perhaps from safety belts, is a driver’s airbag. Forget the other six airbags, seatbelt pretensioners, ABS, EBD, ESP and the rest of the acronym army. What is does mean is that despite modest outputs of 74kW and 140Nm from the low-tech 1.6-litre eight valver, the Mk1 will sprint to 100kph in just 8.7 seconds. That’s a full second quicker than VW’s own new 1.6 litre Polo could manage – it being a chubbier product of the 21st century. Mk1 despatches the quarter-mile in 16.58 seconds, and although braking is hampered by the lack of ABS we managed respectable 100-0kph averages of 3.03 seconds and 44 metres. Low weight is as much of a boon in deceleration as it is in acceleration. 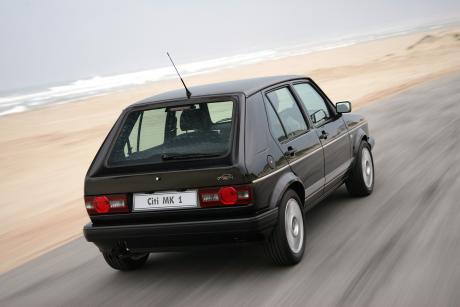 Another benefit of a lightweight chassis is its direct responses to driver inputs. The unassisted steering rack makes no pretence of a hydraulic or electrical interface between tyres and steering wheel, delivering a constant stream of information to the driver (and asking for quite a bit of work at low speeds, too). The result is a linear, predictable chassis that is ripe for exploitation. It’s no surprise the CitiGolf has enjoyed an exceptionally rich motorsport career in everything from gymkhanas to Clubmans circuit racing, the GTI Challenge, and its own dedicated racing series. And it remains the easiest ‘grassroots’ choice for drag racing in sunny South Africa. The world of motorsport is not without its dings, scrapes and mishaps, and three decades of production means original parts, pirate parts and any sundries you care to mention are easy to buy.

Easy to fix is reason enough, but in a world of more powerful, more sophisticated and more intelligent metal, it takes just one blast from a traffic light and a tight corner or two for a seasoned driver to recall why the Citi still owns the lower rungs of the ‘enthusiast’s car’ ladder.

Pin the clutch to the footwell, keep the throttle steady at a virile 3500rpm – more than that will incinerate the rubber – and ease off the clutch till all that’s holding you back is the handbrake. Then pin the throttle to the Mk1 branded floormat as you simultaneously dump handbrake and clutch. Whooooar. No chirrup from a nannied set of traction-controlled front tyres; instead you’re deafened by the banshee squeal of rubber fighting for and losing and finding grip on tar, before the Mk1 Citi is catapulted on its charge forward.

The engine note growling deeply from the exhaust is truncated only at each gearchange. Hmm, this car’s quick. The first corner approaches, and you’ll do well to remind yourself that traction control and ABS do not live here. Scrub off as much speed as you safely can in a straight line, changing the corner’s temperament from ‘deadly’ to merely ‘unfriendly’, notch in second gear, and turn in hard.

If you suddenly find the rear end livelier than you’d like, take comfort that there’s a very low-tech reason. Truth is you only have one rear tyre on the tar, the other dangling a good few centimetres above it – this depite the Mk1’s stiffer, lower suspension set-up. Don’t worry, the tripod stance is a defining Golf trait, though we suspect it’s not one the NCAP panel would find so engaging.

So CitiGolf is still a performer, albeit an unrefined and even dangerous one by today’s roadgoing standards. Yet despite providing gobs of fun, the final instalment of the breed is still an accomplished cruiser thanks to another bout of interior fine-tuning and that handsome, sharp-edged exterior penned way back in 1974 by Giorgetto Giugiaro. Hardly changed at all on the Citi, it remains core to the DNA pool that informs VW’s current small car design. Climb on top of (rather than into) the black cloth sport seats with red stitching serving as trim (this theme is continued all over the cabin), clasp your hand on that iconic golf-ball gear knob and it all feels just right.

The modern steering wheel and Skoda-sourced dashboard feel at home alongside the rest of the cabin and lend modernity to a largely untouched foundation laid 36 years ago. Air conditioning is an optional extra, but is well worth adding to your Mk1 purchase. Hop outside and walk around that geometrical body for as long as you like and you’re unlikely to find a single offensive angle. Familiarity breeds acceptance, for there’s nothing new here, just a honed block of car that retires in the best shape it’s ever been in. For Mk1 that means 15 inch alloy wheels finished off in gunmetal grey, silver foil go-faster stripes, darkened tail lamps, chrome accents on the ‘double headlight’ grille, and a polished exhaust tip.

Pop the bootlid and the ample boot space looks alien. Nothing strictly wrong with it, though I cannot recall the last time I’ve opened a CitiGolf boot and not been met by a pair of 10in sub-woofers and a kaleidoscopic amplifier installation. Not just track demons, Citi Golfs are still to be seen spitting out huge decibel readings at sound-off events, and depending on where you’re located, all it takes is a moment of silence to hear a bassy example being driven near by. When it comes to integrating the Mk1 into South African lifestyle, VWSA can be proud of what they’ve achieved.

You can accuse the Citi of many things, and that would include surviving well past its sell-by date. It rose Phoenix-like as Golf Mk1 was discontinued in most other markets in 1984, yet remained one of SA’s consistent top three sellers right to the last month of production. What the heck was this dinosaur doing in a world screaming for lower CO2 levels and much more safety kit? With race-car like disdain, it got away for years with just the basics. This was a blank canvas on which to paint in performance, add style and, importantly, get mobile on a budget. But it had to go, preferably with a few shards of grace intact. Not a bad stint for a near-vintage hatch that has carried more fleeting fashion names without changing its essential form than any other car that has come before.