Slowly but surely the eccentric Swedes have restyled and repackaged their inoffensive yet quietly brilliant vehicles until the inevitable happened. They caught up. If Volvo’s quiet confidence in the appeal of its saloons is anything to go by, the newest S80 should not only continue that understated style and sophistication theme, it should spearhead it.

Five pots of the syrupy stuff

We expressly head-hunted the diesel derivative as it impressed us the most when sampling the range earlier this month. You see the diesel segment is a bit like Sinatra’s New York, New York – ‘If I can make it there, I can make it anywhere’. We refer to the critical new zone of environmental responsibility, previously known as green guilt. Still, the new 2.4-litre D5 is not exactly an engine debut. The last S80 had a five-cylinder diesel lump too, but it was noisy and had reached the end of its development line. The new high-pressure common-rail twin-turbo one, developed in-house by Volvo, sees a healthy boost in power (total output of 151kW and 420Nm certainly helps its appeal) and in refinement. Yet it boasts a tiny carbon footprint of just 164g/km, plus comes across all frugal thanks to its combined cycle of 6.2ℓ/100km. At idle with the windows down you’ll hear that telltale clatter, but spool up the lump to a modest 2000rpm and it smoothes out completely. Roll the window up and thanks in part to improved NVH (Noise, Vibration and Harshness) levels the cabin falls completely silent. Take it even higher up the rev range and the fiver emits sounds like the throaty gurgle from a rampaging tiger. It’s a diesel, so it’s hugely tractable all the way to the paltry 4500rpm redline. Steam train acceleration awaits should you need to frighten that punk next to you in his GTI with 0-100kph dispatched in just 7.6 seconds. Which means it’s sort of like an Opel Superboss yet seats five comfortably, with electric-operated seat controls, Bluetooth and MP3 compatibility, cruise control and countless more cosseting features on board. 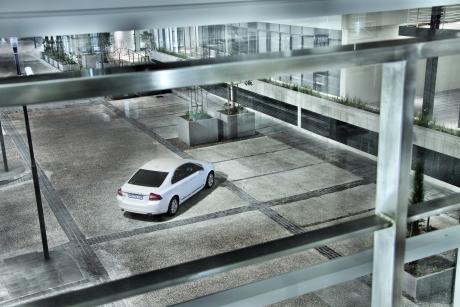 Even the automatic transmission is tough to fault, feeling perfectly complementary to the motor at all times, whether navigating the winding wine routes or dabbing the pedals through stop-start city traffic. I haven’t been this energised in a diesel since last year’s BMW 520d – and this just about trumps it. I even find myself revving it up just to hear that diesel induction growl!

The steering feel is customisable too from light to heavy depending on the kind of driving you enjoy, each with specific appeal. Front-wheel drive is the default (the top of range 3.0T gets AWD) and feels instantly familiar, with handling dynamics most easily compared to a large Audi. Except in this case the sign of expressed fury sits on the grille (the Volvo pointed arrow trademark is the symbol for iron) and won’t be directed at the occupant of the driver’s seat. Which is why you can get away with murder in a Volvo – you see, they’re for nice people.

So the engine is fantastic, but there’s so much more here. The S80 (R471 100 for the D5) represents great value regardless of which fuel you prefer to burn through. It certainly feels special in the cabin with its swathe of treated-tree lining the otherwise

sombre dashboard (unless you consider it pared away to essentials). I’d opt for the tan interior. It does so much to brighten the cabin and injects much needed light heartedness into your mood as a bonus. Ergonomically the Volvo ticks all the boxes, and boasts a Germanic attention to detail. The only option not standard is the Garmin GPS system for R7 000, so no need to whip out the MapStudio book at every junction.

Yet my favourite attribute is enjoyed when the S80 is viewed in profile. Little touches it for drama when covered like our test unit in pearlescent white and parked at night on a well-lit street. It’s previously slab-like flanks are broken with subtle creases and chrome accents, while the body has been widened by 27mm and raised by 34mm. This is real hewn-from-granite styling, which further pumps up the presence of the S80. The front end is familiar, but it too enjoys a heftier presence, as does the rear, and in concert with those chunky alloys the Volvo gains a wickedly aggressive stance – all subtly alluding to the brilliant handling of the chassis underpinning it. Headlamp and tail clusters have been updated too, and are now more ornate than ever without resorting to ostentatious LED light eyeliner trickery.

Without trying to invoke too much shock and awe, I stand by my initial impression of the S80. What Volvo lacks as an aspirational brand, it more than substitutes with limo-like pace and grace. The S80 comes standard with almost every safety acronym and mod-con in the book, and the new diesel is an absolute gem. Talking up a Volvo is a lot like referring someone to that lesser known family-owned restaurant around the corner instead of the default five-star one that ‘everybody goes to’. The food is just as good, the service is probably better, and the prices are an absolute bargain. Plus you won’t be yet another mindless trend-following sheep. It’s certainly the one I’d recommend to the people that I really like.