I’M NOT SUPPOSED to like it, am I? Hmmm, I thought so too. Yet, much to the concern of my colleagues who think I’m suffering from a mild case of delirium, I find myself innately attracted to the third-generation Volkswagen Beetle. However, fear not dear work mates because this attraction is nothing more than a nostalgic recollection of my first encounter with a Volkswagen Beetle as a three-year-old. The car belonged to my parents and was affectionately, if not predictably, dubbed Volksie. Volksie was a noisy and charismatic vehicle that encapsulated the zeitgeist of the time with its quirky character and affordability that subsequently endeared it to owners all over the world.

Fast forward to 1998 and the second-generation Beetle was in its first year of production. Despite the positive fanfare surrounding its introduction, it didn’t sell particularly well in SA, managing a dismal 2600 sales over its decade-long life span. During this time it also earned a reputation for being lady’s car – a tag this model hopes to revoke by attracting a larger male audience. The 21st Century Beetle you see here is a lot closer to the original Volksie in terms of personality and design but is this enough to change perceptions and, more importantly, will it sell?

It does look pretty cool, doesn’t it – especially those half-moon LED-garnished headlamps that lend it a Porsche-like expression? Ours has been painted in a baby-blue colour that Volkswagen calls Platinum Grey. It’s by no means a masculine shade but you can always spec it in a darker colour such as black or red to ramp up its visual appeal. Compared with the previous model, the new car is 150mm longer and 80mm wider and sports a lower roofline and stockier fenders complete with chrome-lined door sills that hark back to the first-generation Beetle. The biggest change lies at the rear where a brace of contemporary tail-lamps and a rear valence impart a resolute design progression over its predecessor without losing the fundamental blueprint of the iconic bug shape.

Step inside and you’ll notice the unusually high facia layout that, along with the glove box, elasticated door pockets and pulley-style grab handles, pays homage to the original Type 1 Beetle. The cabin layout is far cleaner than the superseded model’s with a host of familiar switchgear on view. Remember that hideous flower vase, the bulky facia and almost toy-like instrument cluster of Version 2? Well, that’s all been chucked out – thankfully. Cabin refinement levels are still of a very high standard with fillets of body-matching glossy panels running across the facia and upper door panels boosting the aesthetic appeal which is similar in look and feel to panelling found in the Volkswagen Up.  Adding a premium feel are the leather-covered flat-bottomed steering wheel, shift knob and the integrated touch-screen.

However, in spite of the design improvements there are still a few ergonomic flaws such as limited rear headroom due to the curved roofline and the restricted rear access, which still proves to be a nightmare even with the fitment of larger doors. Boot space – at 310 litres – is generous and can be increased to 905 litres with the seats folded down. Quite a pragmatic car then, but how does it drive?

Rumble in the jungle

The pocket-sized turbocharged 1.2-litre four-potter packs some serious fire power that belies its minuscule capacity. With 77kW and 175Nm of rotational force on tap, it’s able to whisk through the gears of its six-speed manual ’box with alacrity and doesn’t feel anything like what you’d expect from a downsized power plant. Naturally, there is a hint of turbo lag at low revolutions but once full torque is fed into the front wheels at 4000rpm the Beetle becomes quite a lively customer. In fact, from standstill it will break the 100kph barrier in just 10.8 seconds. While this may not sound too inspiring, it’s actually four seconds quicker to 100kph than the 85kW/172Nm naturally-aspirated 2.0-litre model it replaces. The meaty torque figure also aids in overtaking manoeuvres, allowing the Beetle pull itself from 80-120kph in only 9.7seconds and on to a top speed of 180kph.

The engine sounds fantastic too, especially under wide-open throttle. Sure, it’s not as vociferous as the air-cooled popcorn machine-like melody that characterised the very first Beetle, but it’s a nostalgic noise nonetheless that complements the package. On the flipside, the Beetle is a phenomenally economical machine and no matter how aggressively you drive it the fuel consumption seldom spikes above the 8ℓ/100km mark. I was able to match the claimed 5.9ℓ/100km on more than one occasion through a variety of testing conditions.

Ditch the ego and drive it

I’ll admit that it was a little emasculating driving it around for the first few kilometres but that disappeared the moment I pitched its nose through the first corner. It’s actually quite a grippy little thing and hangs on well in twisty environments as a result of the widened track and stickier rubber. It does, however, make a habit of understeering if you carry too much speed into the corners and the skittish nature of the rear-end over uneven road surfaces can be quite disconcerting. That said, the suspension layout, which comprises MacPherson struts up front and a torsion-beam at the rear, is pretty firm but pliant and absorbs imperfections with little fuss. The electro-mechanical steering isn’t too bad but is quite heavy at both low- and high-speed operation. And while there is not much in the way of feedback it’s still responsive enough to be able to properly attack a meandering mountain road should the need arise.

The results are in

The new Beetle took the majority of the topCar team by surprise, particularly its punchy yet efficient 1.2-litre engine. During the test period it stirred up a lot of interest from bystanders of both genders – in fact, a member of the Air-Cooled Culture Society trailed us to our photo shoot location for a closer look and was most impressed by what he saw, especially the nostalgic design touches and overall shape progression. Sadly, most buyers will be more interested in what the Beetle offers as a fashion accessory rather than how it drives or what it stands for, which is unfortunate since it’s this particular mind-set that sullied the reputation of its forebear. At R235 400 the entry point to Beetle ownership has been reduced over the previous model. Combine this with the car’s impressive handling capabilities, its aesthetic appeal and frugal engine and the Beetle should theoretically be a sales success, no? But it won’t because, like me, many people would rather opt for the more expensive machismo Golf or Scirocco instead. 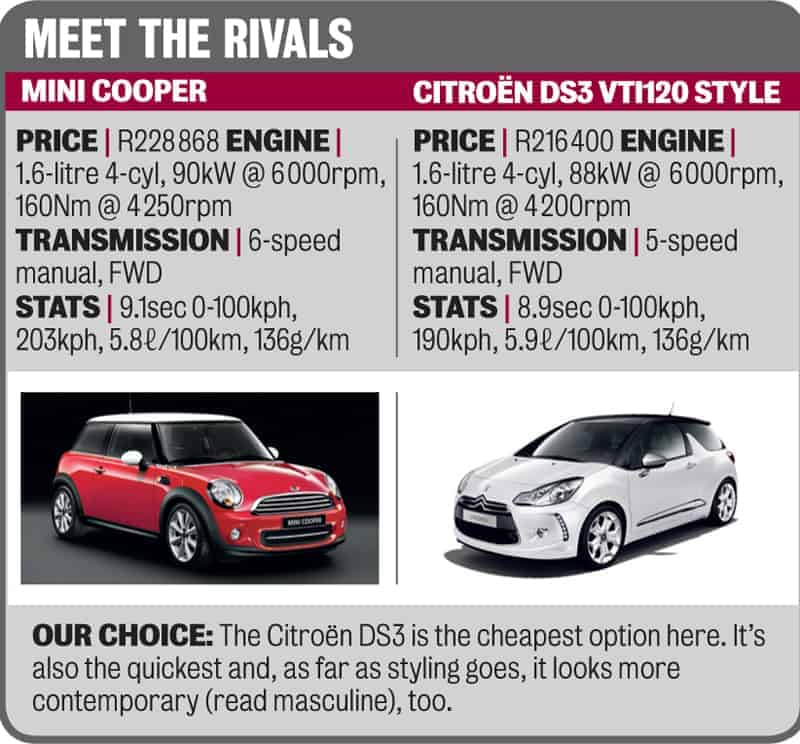