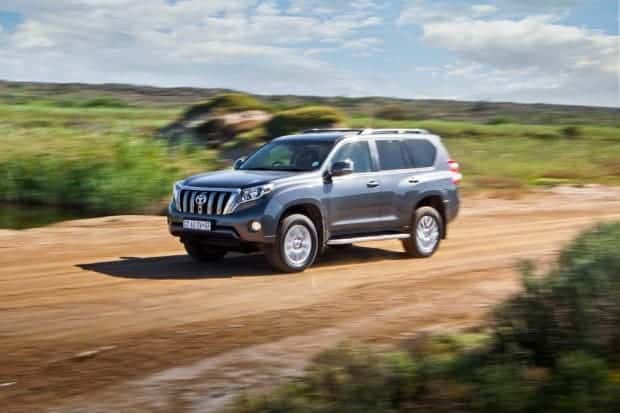 There aren’t many vehicles as adept in a rock-strewn environment as the venerable Toyota Prado. This bona fide gravel sledgehammer has forged a name the world over for its reliability and hardy build quality but in terms of on-road dynamics it’s never really impressed. The face-lifted fourth-generation Prado you see here is arguably the best model yet and has undergone a glut of cosmetic and mechanical revisions – one of which is the modified, electronically governed Kinetic Dynamic Suspension System which ensures a better balance between on/ off-road proficiency. It all looks and sounds rather impressive but just how competent is this machine? To assess its all-round skill set we filled its 150-litre tank with diesel and headed to Lamberts Bay via Clan William on a 680km round trip. As expected, things got dusty…

Okay, so the Prado has never really struck fear in the eyes of its adversaries in terms of shear aggression but the new model sure looks intimidating, doesn’t it? While some may have reservations about its somewhat outlandish visual garnishing you can’t deny its malevolent presence. Visual tweaks include a more defined front bumper, larger LED headlamp clusters which have been mounted slightly higher than that of its predecessor to avoid damage, a prominent five-bar grille and reworked tail-lamps. Being the VX model each bulging corner employs a 12-spoke 18-inch wheel – not the most practical choice around but an aggressive touch nonetheless. The visual alterations however, have done nothing to affect the vehicle’s exterior proportions thus the turning circle (11.6 metres), approach (32°), departure (25°) and roll-over (22°) angles remain unchanged. Other embellishments worth a mention include the front and rear spats which channel air flow around the tyres and wheel housings, and a front deflector which manipulates air flow from the radiator grille to reduce turbulence.