SUZUKI, THAT PROLIFERATOR of everything from quads and trikes to superbikes, makes no apologies about being lifestyle oriented and outdoorsy about its car line-up. From the humble Alto town car to the terrain defying Grand Vitara each model has its own flavour, look and purpose. Here’s where Suzuki’s own Swiss Army knife fits in ­– the SX4 Cross(X)over, now available here with the four-wheel grip its name promises, and delivers, in other markets.

BUT WHAT IS IT?

Launched in 2007 and in SA with front-drive only in June 2008, the SX4 came across as a tallboy interpretation of the C-segment hatchback. Its gravelly aspirations were hinted at by superior ground clearance and rugged plastic claddings in the same vein as the VW Cross Polo, Renault Scenic Navigator and more recently the Nissan Grand Livina X-Gear

Equipped now with up to 50% drive to the rear wheels as well, and a sticker price of R229 500, it’s likely to duel with the likes of the smaller-engined but more off-road capable Terios. A special selling point is that the 2.0-litre four-cylinder engine under the crimson bonnet of our test car produces 112kW and 190Nm, delivering sportier performance than the looks might indicate. Inside the cabin you have Golf 6 challenging degrees of space, so naturally it should compete against that too. But that’s not really the case. No. You get the impression Suzuki doesn’t make up a clearly defined list of rivals to pit their products against, choosing instead to face off the SX4 against damn near everything in our buyers’ guide. Plucky Japs!

At first glance the SX4 comes off a bit unresolved. A chunky rear end and sharpened visage seem at odds, but what happens in the middle marries the two ends into one cohesive metal arrowhead. The greenhouse in profile is large, which equates to airy cabin space. A dip in the waistline around the A-pillar, and more notably the rise that follows at the base of the quarter light, enhances the muscular arches up front. A black-trimmed set of inflated wheel arches house a meaty set of 16-inch alloy wheels (wrapped in 20560 rubber) allowing the overall design to lean towards the masculine category, with some help from the steeply raked windscreen and a butch set of roof rails.

Despite the onslaught from photocopier-ridden China and the previously mentioned contenders in the crossing-over hatchback genre, the SX4 still manages to retain its own distinctive identity. They’re easy to spot on the road and I can testify to encountering at least two of them on my daily route. Upfront the SX4 is handsome following revisions to the grille, and a pair of foglamps is fitted as standard. Pity they are housed within a bumper endowed with such a weak ‘jaw line’. 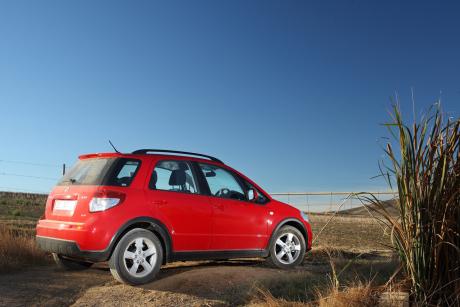 Suzuki often successfully emulates the ergonomic success of its fellow Japanese manufacturer, Toyota, across their range. In the SX4 it’s no different. Everything falls to hand naturally and the surfaces on offer are tactile, if somewhat plasticky. The instrument cluster has been revised, and our high-spec version came equipped with cruise control, climate control and a good nine-speaker audio system with multimedia capability – all standard on the 4WD model. Also fitted are the now almost obligatory steering-mounted satellite controls for the mod cons. The seats are cloth-covered but comfortable, satisfyingly adjustable and talk to the steering which is adjustable for rake. A tally of seven cupholders, plus an assortment of hidey holes, means you’re never short of real estate for stashing phones, snacks, drinks, knives or whatever else your Marlboro existence requires.

Curiously, the interior dimensions feel a bit more cramped than the exterior promises, though fitting a family of five was a hassle-free exercise. That’s until you encounter the miniscule boot which has been downgraded to 253 litres (from 270 litres) for the 2010 model revision, and just doesn’t cut it anymore. Where do I put my snorkel, rubber duck and parachute?

Keyless entry means you can chuck your Suzuki emblazoned fob into one of the many trays on offer, twist the widget that replaces a traditional ignition key on the steering column and the multivalve motor rumbles into life. It’s a muted exhaust note that greets you, and that pretty much remains through the rev range. Don’t be fooled though, this 2.0-litre VVT engine is a very tractable little gem. Performance is up on the last version’s 107kW/184Nm, fuel consumption is down (8.4 to 7.5ℓ/100km), and it’s well suited to the six-speed manual transmission Suzuki has paired it with. At 1245kg the SX4 is relatively light, which means it’s deceptively nippy, and the disc brakes – vented up front, solid at the rear – are precise and effective.

The SX4 rides like a car because it is a car, albeit one on stilts. It’s a tad top-heavy, and susceptible to body roll, but plenty of compliance has been dialled in. The soft springs are great for soaking up corrugated clay and gravel roads, and that odd stretch of tacky tar, helped by the big boots. Suspension is by MacPherson struts up front and a torsion beam rear, with the rear differential mounted to the body. A rocker switch mounted on the centre console activates the ‘intelligent’ four-wheel drive (i-AWD in (Suzuki-speak), shifting from the most economical front-wheel drive only, to AWD Auto for loose surfaces, and to AWD Lock which splits axle drive equally front and rear at speeds up to 64kph. The system calls on the ABS to achieve a limited-slip braking effect on any wheel that is losing grip, and is effective on a surprising range of terrain. So it’s good on sand and mud, but not happy about heavy-duty rock hopping.

Suzuki specializes in compact cars with big attitude which have their flaws, but are equally often able to surprise you. The SX4 racks up loads of good points but perhaps tries to straddle too many segments. At R229 500 the all-wheel drive SX4 competes with many other good cars. I’d be very happy to own one myself, but just couldn’t figure out a scenario where I’d actually do the deed and part with my own money for one, or even put it top of a wish list for a friend I cared about. Truth is, it’s not a true 4×4 in the most rugged sense of the phrase, despite its ability to traverse a loose surface at pace. If you’re young at heart and your drive spectrum always includes a selection of loose surfaces, this could be your answer. Personally, I wouldn’t settle for a jack of all trades when I could as easily possess a master of one.