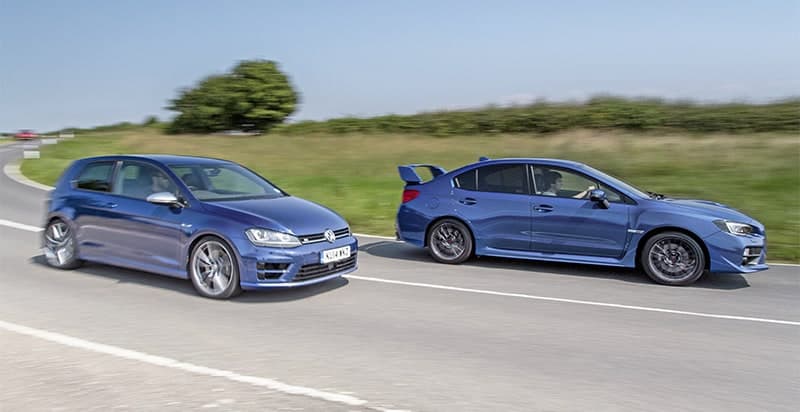 Subaru’s battle with Mitsubishi has been the stuff of legend. Two eccentric Japanese car makers harnessing their WRC know-how to make a pair of anonymous saloons supercar-quick has captured our imagination over two decades. But that battle ended when Mitsubishi killed the Evo, leaving Subaru skulking around with a diminished Impreza, and we wondered if the spirit had died. It hadn’t.The new WRX STi, shorn of the Impreza name, comes out of left field as the last of the rally refugees facing a balancing act between evoking memories of McRae and Burns while competing in the much, much more demanding 2014 arena. VW may be rallying the Polo, but on the road the Golf GTI is the boss and the four-wheel-drive Golf R is destroyer-in-chief. Its 206kW matches the output of the WRX STi, and both cars have turbocharged four-cylinder engines, make around 400Nm of torque and top out in the 250kph region. Twins, however, they are not.On local soil Subaru has priced the WRX STi at R599 000, but that excludes the rear wing. The equivalent VW Golf R manual starts out life significantly cheaper at R485 400, but then you’re given free rein with the options list. The Golf suddenly sounds like an awful lot of performance car for the money. We’ll leave it up to you to decide if you’re sold on the Subaru’s new snub-nosed looks, but that body is both lower and wider and stiffer. The wheelbase has also been stretched by 25mm.

The old burbly 2.5-litre flat-four has been carried over largely unchanged, with only a new ECU and intercooler needed to pass Euro 6 emissions. Amusingly, in an era where even Porsche’s 911 has fuel-saving electric power steering, Subaru has stuck with a hydraulic power-steering system.The STi weighs the same as the old model and has identical power and torque, so it’s no surprise that it takes the same 5.0sec range (depending on how brutal you are with your launch) to reach 100kph. A sign of the times is that the Golf now bests that, at a claimed 5.0sec for the six-speed manual.I drive the Subaru first. Climbing behind its small, leather-wrapped wheel and perching on its firm, supportive chair, it’s difficult not to be excited. I feel like I’ve been spirited back to my youth as its 2.5-litre throbs away, occasionally hiccupping as if it was drawing breath through twin-choke Webers. The first Impreza Turbo I drove back in ’99 did the same; it also had the same appalling interior.

The best compliment I can give is its cheap-feeling, dated cabin feels almost exotic beside its mass-market rivals, but it will send most off into the arms of a Volkswagen salesman. Shame, because if you have a sense of humour the red dials and ’90s typeface are quite amusing, and for the 2014 model there’s even a new 4.3-inch LCD screen mounted above the air vents with a boost gauge, torque-vectoring diagram and a real-time fuel consumption gauge. Okay, it’s not cutting edge, but they’re trying.In any case, the ride will take your mind off the cabin. Forget the softly sprung WRX of the past this new STi feels like it’s pinched its stiff springs from a GroupN touring car. The new car also has thicker anti-roll bars, stiffer bushing and new shock absorber mounts and it feels it. What hurts my poor brain more is the steering. It initially feels very odd, it’s light but has a powerful self-centering effect.Much more pleasing is the mechanical feel of the whole car, and the clutch, brake and slightly notchy gearshift are all matched for weighting. Subaru’s SI drive selector carries over from the previous Impreza, but this time the ‘Intelligent’ setting doesn’t feel like the whole car’s been anaesthetised. The Sports and Sports Sharp also usefully improve throttle response.

As much as enthusiasts love the Subaru flat-four, it’s useless if you’re not concentrating. A 407Nm torque peak at 4200rpm means it’s all too easy to be caught out, even with its short gearing. But once it’s on the boil it is really quite something, hurtling to redline at such a rate you’re at risk of head-butting its limiter. Luckily that initially notchy manual gearbox can be rushed.At speed the steering feels better, but it’s not a great communicator and you have to trust there’ll be grip the faster you go. Luckily the four-pot Brembo brakes are stunning. I push further and, when eventually the nose runs wide in a slower corner, I pin the throttle expecting the all-wheel drive to do its stuff and tuck the nose in with a nice tail-out stance. The WRX is having none of it, even when I adjust the centre diff manually.Jumping into the Golf R I doubt I’ll cover ground as quickly or have anywhere near as much fun, especially when I nudge the DSG box into D and the stop/start kicks in at the first junction. I’m happy to award the STi the win there and then.

But switching the VW’s adaptive chassis into ‘Race’ makes the suspension firm up, and there’s extra weight to the steering while the throttle sharpens. The R is fitted with bespoke springs, dampers and anti-roll bars, and has a ride height 5mm lower than that of the Golf GTI. I give chase and immediately realise I’ve underestimated this Golf. Despite having ‘only’ 380Nm of torque its peak is from just 1800rpm, and from that point it is laughably easy to keep up with the STi.Sure, the DSG gearbox helps, up- and down-shifting through bends, but it’s also the way the (relatively) softly sprung Golf R copes with mid-corner bumps it ignores them. There’s less fight and flight.It even sounds better inside than the thrashy STi, although the biggest thorn in the Subaru’s side is what happens when the inevitable understeer arrives in the Golf. Yes, it can oversteer, the latest-gen Haldex all-wheel drive valiantly shuffling its torque to the rear when the front tyres are overwhelmed. At its most extreme the system makes the R a fully rear-wheel-drive Golf. And, unlike the GTI, you can switch the stability system fully off. It also feels more agile, lighter (it is 40kg lighter) and more playful.

The interior, of course, knocks the Subaru’s out the park. The R has great sports seats, cool blue needles on the dials and a build quality that Subaru doesn’t even have dreams about. Throw in the Golf’s ability to average 7.0l/100km beside the STi’s 10.5l/100km and the fact it rides better when you’re not in the mood, and the Golf R is simply the better car. It wins with its eyes closed. But (you knew there would be one) the STi, flawed as it is, still remains one of the most charismatic performance cars out there.Words John Mahoney Photography Mark Riccioni