Every once in a while you get to test a car that really piques your interest. Like the latest V10 supercar or an indecently quick family hatch. However, testing an all-new version of a car you actually own can be just as intriguing. Take for instance the Renault Scenic we bought in 2005, back when MPVs were hot family property. Despite not being much fun to drive, it’s still the number one weekday Batty-people mover and a favourite of the ladies in the house. Does the new one build on the old version’s strengths, while simultaneously ironing out some of the wrinkles? Only one way to find out. ‘Ladies…’

‘Jeepers, how big are those headlights,’ followed by ‘it seems much longer,’ says my observant wife as she climbs aboard. Yes dear, that’s because it’s the seven-seat Grand Scenic model. ‘Yay, two more seats in the boot,’ whoops my seven year old, racing around to the rear. The extra seats sprout from the boot floor with an easy spring-loaded pull of the straps as she enthusiastically scales them from what remains of the luggage area. I move around to slide the middle row of seats forward, finding familiar levers and a simplified tilting mechanism. In any of the arrangements, the floor is never flat, so it’s still not as convenient as the Verso’s disappear-into-the-flat-floor seating arrangement, but Renault probably figures that having three ‘proper’ seats is preferable. To be honest, in five years we’ve only ever had to remove our Scenic’s seats once, so it’s never been a problem. Other owners might have had a very different experience. 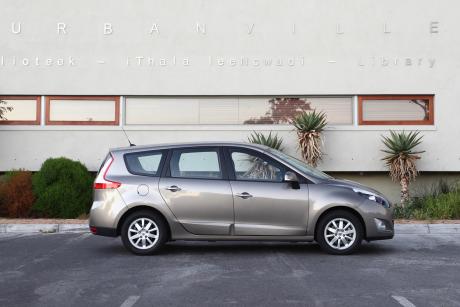 ‘Oh I do like the darker interior. That’s much more practical than our hospital beige trim.’ Mom sounds impressed, for now. ‘Is this where you put the keycard?’ she asks, pointing to the slot just below the gear lever. ‘Well, that’s no good. It’ll fill up with yoghurt in no time.’ Maybe not yoghurt, but she has a point. Renault’s very convenient hands-free keycard never has to leave your pocket, exposing the cavity all the more. The previous position was a vertical slot higher up the dash – much less prone to dust, crumbs and coffee spills. I take a moment to study the dashboard architecture. It’s a real surfer’s paradise of soft-touch plastic waves and a big step up in sophistication from the old car’s once avant-garde design. Two colour TFT displays take centre stage atop the dash, one for the fully integrated TomTom navigation system, the other replacing traditional instrument dials. The graphics are sharp and easily readable but could’ve used punchier colours. I did notice that the ledge of soft dash which shades the screens wobbles on the go. Park it in the hot African sun for a while and it can be quite a distraction. Probably useful in an accident though.

After fiddling with the dual zone climate controls and the separate navigation module (nine buttons surrounding a rotating, directional and clickable central knob) and sliding the armrest/storage box back and forth a few times, my wife declared the new cockpit to a be a satisfactory improvement and went off to more important tasks than car evaluation, leaving me to figure out the

satellite controls. The really useful boss mounted buttons are wasted on less utilised cruise controls, while all the more frequently needed audio-related items are again hidden behind the steering wheel on what has become a veritable hand grenade. The simple old audio controls have proliferated into a selectable scrolling wheel plus an eight-button pineapple that now also controls menus and bluetooth operations. Useful, but you’ll have to factor in a fair amount of static familiarisation beforehand. You can’t be craning your neck to look behind there while on the move. Naturally the audio system speaks MP3 via CD, USB port and auxiliary inputs.

One frustration was having to switch on the radio in order to use the satnav. If you don’t want to hear the radio, you’re forced to mute it. It’s okay once or twice, but gets a bit tiresome after a while. Overall the interior is chock full of clever storage areas, possesses more design flair and is much more adventurous – if not quite as practical – than its Japanese and German rivals. Great, but how does it go?

With a pronounced turbo-lag effect really. Not to say it’s slow or underpowered, just that the turbo spools up with a steady delivery rather than a heady whoosh. It’s obvious Renault has optimised the engine/gearbox combo for economy and after obtaining litres/100km fuel consumption figures in the mid sixes, we can’t complain. And that included our performance testing. Renault claim a combined cycle figure of and for once that doesn’t seem too ridiculous. Driven sensibly a range nearing 1000km on a 60-litre tank is doable. The gearbox is a sixspeed manual unit that offers a more robust feel to the linkages than before and this, combined with less elasticity in the steering, makes the new Scenic an improved drive. The handling is better too, with great body control for a bus. On track the Grand felt surprisingly neutral with our road test engineer, Peter Henkel aptly remarking that ‘there’s a very competent chassis beneath all that metal’. What has suffered slightly is ride comfort. Even taking into account that the Grand version is set up to carry additional mass, the suspension feels notably firmer than Scenics of five years ago. It’s still good by modern standards though.

The new Scenic doesn’t exactly shake the tree, rather, it’s a subtly better execution of familiar ideas. So, more refined, more sophisticated, more capacious and better to drive then, but if you weren’t into MPVs before, you’re not going to be swayed by this one. Not the revolution it once was (others have since caught up), it’s still an excellent MPV that majors on comfort and efficiency. Fans of previous generation Grand Scenics will not be disappointed, while late adopters of the MPV lifestyle searching for a seven-seater with a people-over-cargo bias should also be pleased. And with Renault’s longer service plan and outstanding year150 000km warranty, owning one will hopefully prove a better long term prospect too.