THE CROSSOVER LABEL is hauled out these days for any vehicle blending a few bodystyle genres or blurring the traditional segment definitions. Sports utilities and multi people movers are melding and contorting into a new breed of urban runabout touting off-road capability irrespective of the drivetrain set-up. Yet the incandescent sales success of Nissan’s Qashqai means the bundu-bashing details matter not a jot to most buyers. But the Qashqai is more than that, and after three weeks sampling a traditional five-seater and the just introduced seven-seater +2 sibling, I can verify that the car has real substance.

Sporty or practical, capable or desirable – why choose? We’ve opted to review the Qashqai +2 because at a premium of just R20 000 over the five-seater, you’re endowed with so much more car. Sure, the third row is compact, but it’s capable of carting two little ones in comfort, albeit with restricted views of the road. This benefit emerges from a wheelbase extended by 135mm thanks to a total body length increase of 211mm over the fiver. Headroom is similarly affected and ditto for legroom, creating a cabin to make Nissan’s own Murano seem a little overinflated. It certainly challenges it for comfort and a premium feel. Under the sculpted bonnet is a 1997cc normally aspirated multivalve four outputting 102kW and 198Nm, mated to a traditional six-speed manual transmission. The CVT (for constantly whining transmission) is reserved at this point as an option on the five-seater model only. With the +2, the Qashqai issues a challenge to larger SUVs and MPVs in much the same way the regular model has become a real alternative to the perennial hatchback. 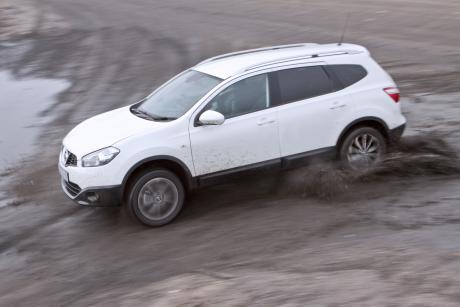 HOW ABOUT THE LOOKS?

With its 2010 update, new Qashqai‘s most notable upgrade is an intravenous shot of machismo. The revised headlamp clusters are more defined, and spearhead a subtle list of aesthetic tweaks such as a sportier honeycomb grille, more sharply-pressed bonnet strakes and a cleaner front bumper treatment with a better relationship between colour co-ordinated plastic and rugged grey cladding. The rear lamp clusters get LED definition, and in each corner Nissan has opted for diamond-cut 18-inch alloy hoops, pinched from last year’s Tekna derivative. The result is a far more aggressive animal, even in our test car’s anaemic monochrome white. That said, the puffed up arches, softly swaged hip line and a profile reminiscent of the marque’s own Murano SUV, complemented by a taller roofline, means the Qashqai +2 oozes a premium demeanour and promises acres of space within. A tint on the rear glass and silver roof rails all add value to the +2 package, which at R303 500 in 2.0-litre manual form at least looks the business.

Black plastic rules supreme aboard the Qashqai’s sombre cabin, and while it’s unmistakably ‘Nissan’ in layout and mood, it does have a distinctly premium feel. At this price point there’s no seat leather, though the neatly stitched dark fabric seat cladding looks to be of good quality. The dash is slush moulded in squishy plastic, with harder material on the centre console and hangdown areas. These house the obligatory climate controls and multimedia knobs and switches. A pair of cupholders and a nook for smaller items is positioned between gear lever and the traditional handbrake, with a pair of bottle holders situated in the doors. The centre seat of the middle row can also be knocked forward and rewards with a similar array of holders, nooks and crannies. So there’s plenty of space to store your junk. And that will please the kids. They will be less pleased by the absence of multimedia connectivity beyond an auxiliary jack. There’s no USB port or iPod connector, though mom and dad can sync their mobiles thanks to a hands-free Bluetooth connection. The leather-clad steering wheel hauls back the premium element with a full complement of satellite switchgear for audio, cellular and cruise control operations. Qashqai is five-star NCAP rated, so expect the usual onboard safety gear from an array of airbags to ABS, EBD, VDC and brake assist. Baby- and toddler-friendly Isofix anchor points are standard issue.

After a brief acclimatising session in the cockpit via a bevy of dials and levers operating the steering wheel and driver’s seat, you’re in. Front occupants are treated to a commanding raised view on par with much bigger (and more expensive) machinery. A traditional key twists the Qashqai +2 to life and the engine responds quietly. Noise, vibration and harshness (NVH) are well blanketed from the cabin occupants in the latest iteration. Shift into first with a positive throw of the leather sheathed gear knob, release the firm clutch and you’re away. Even in this model’s front-wheel drive only set-up, that generous ground clearance gives you confidence to traverse fairly uneven surfaces. And you can do so convincingly despite the low profile rubber, to a point. Selectable four-wheel drive is available as an option on the five-seater model. On the road the Qashqai +2 truly comes into its own, with a ride described most frequently as smooth by the various passengers who gave comment during our test period.

The rear suspension, though somewhat improved over the previous version, was slightly crashy over more treacherous bumps and ridges on gravel, though is surprisingly compliant on the tar roads that will be its most frequent stomping ground. The electric power steering (EPS) provides sufficient communication between front wheels and driver, and responds enthusiastically at both lower and higher speeds. My only gripe is that it feels a bit vague closer to its centre point at trundling pace. Par for the course, really. And apart from occasionally offering up third gear when in fact I was requesting first, the ambitious Nissan proved mechanically sound and was largely unflustered by my inputs. Performance is sufficient, with a capable (if uninspiring) 10.95 second 100kph sprint if you should ever need to outgun that Fiat Panda 100HP from the school gates – not quite a shove in the back, but then it’s all relative.

WHY WOULD I NEED ONE?

Maybe you’recautiously dipping your toe into the SUV segment or have outgrown your hatchback tendencies? Perhapsyou’rea sedan or wagon man not ready to ascend into the D segment just yet? Either way, Qashqai makes a lot of sense. Think big and the longer Qashqai +2 benefits not only from copious extra space but also from a surprising side effect: an exterior that looks better, and challenges a whole new league of car. Forget the ubiquitous ‘crossover’ term. If it looks like an SUV, goes like an SUV and is priced like a hatchback, you’d be a fool to ignore it.