As families broaden their search for the all encompassing extra-urban runabout, the biggest scorer is the SUV sector.

Sedans are no longer the default choice since MPVs perform the same function, cost about the same, plus offer elevated driving positions, more headroom and space in spades. Medium-sized SUVs such as the Murano match these attributes task for task, but for a small premium add that promise of go-anywhere prowess that so easily tickles the average South African’s adventuring spirit.

Sure, a modest dirt road is the closest most will come to the Dakar in the new Murano, and let’s pretend for a second it’s not destined to climb little more than shopping centre pavements along with its sector compatriots. Yes, it represents some wonderful escapism, but that logic aside, it doesn’t quite add up.

On the face of it

Just look at it. Nissan’s latest stab at the Murano concept is just as extrovert(ical) as the last, with every sheet of metal updated for 2009 including that faux chrome-plated toothy grille between seriously ornate headlamps. The profile is reminiscent of the Lexus RX350 and our gunmetal grey test unit boasts seriously rugged street presence. It’s the kind of car you could intimidate motorists in the right lane with, should you be of wicked persuasion. It’ll look pretty imposing parked in your driveway too.

Version II of the Murano has already served a year of duty Stateside, where it was originally conceived. It is underpinned by Nissan’s robust D-platform chassis, shared with the US market Altima, an executive saloon. Which helps explain why the Murano, albeit endowed with intelligent All-Mode four-wheel drive, off-road friendly overhangs and a lockable differential, to all intents and purposes drives like a portly, if well-built car. You could hardly criticise it for that, especially since Nissan themselves hail the Murano as ‘road-optimised’ – which it so clearly is. 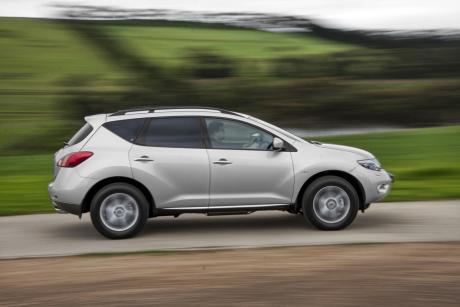 Climb into the dark leathery cabin and you’re greeted with a typically geometric Japanese design language, spruced up with America’s loose interpretation of luxury – which means you never struggle to find a place to put your quart of ‘kawffee’, nor will you stretch to find a place to rest your chubby elbow. Even the leather on the door cards and seat backs have been ‘gathered’ like grandma’s drapes, I guess to further illustrate Yank ‘poshness’.

But that’s as much as I dare berate it, because it’s surprisingly comfortable in here, with a good mix of plastics and yet more smatterings of leather. The steering wheel fills your palms ‘just right’, and it too is covered in leather and laden with a host of satellite multimedia controls. Switch gear, rocker dials and knobs are instinctively located – it’s a familiar place this big Nissan.

Insert the key, thumb the start button and that buttery 3.5-litre V6 slinks into action. Revisions to the VQ35DE mill have upped power to 191kW and it now churns out a torquey 336Nm at 4400. So it ticks the box marked ‘Sport’ even more firmly than the outgoing model. Shift the CVT automatic transmission’s gear lever to D, flatten the throttle and Murano whooshes steplessly from zero to one hundred in 8.7 seconds, whistling on to a claimed top speed of 210kph.

Yes, it’s a continuously variable transmission, that droning auto petrolheads love to hate. Reality though is that when a vehicle is built precisely around a commitment to making progress from A to B as smooth as possible, while using less fuel and making a smaller carbon footprint, then a CVT makes a lot of sense – especially in newly tweaked X-Tronic guise.

The engine makes all the right sounds too, with the twin exit tailpipes housed within that 370Z-like rear diffuser emitting a convincing howl, albeit at one pitch.

I’m also happy to report that the show doesn’t fall apart completely when you get to the first corner either, thanks in part to that limo-like Altima chassis. Quick direction changes dish up fairly noticeable body roll, nothing scary or compromising at low velocities, though progressively hairier beyond the speed limit. It’s primarily a soft-edged softroader, so I headed it towards the soft gravelly stuff where it performs exactly as it does on tarmac.

The only difference is that the power usually sent exclusively to the front wheels (a 10.9ℓ/100km combined cycle is your reward) now enjoys more play time on the rear wheels. A heavy foot will induce mild tailslides, mostly of the variety used to quell the understeer inherent in trying to slow down and turn-in with a two-tonne tallboy. Here again, the CVT transmission proves its worth, allowing you to keep speed constant while freeing up both hands for steering wheel duty.

The Nissan Murano represents fair value at R494 000 if you want an executive sport utility cruiser. It’s lofty, well stuck together and ladles on a lot of individuality for the trendy young family – the perfect ride then for those shiny happy people REM were singing about. It offers just about everything the Lexus RX350 does (including a Japmerican identity crisis) for R190 000 less and the gadget count is unprecedented.

Apart from the safety stuff such as ABS, EBD, VDC, TC (is this TMI?) and airbags galore, the one-spec Murano comes equipped with xenon headlamps, Isofix child seat compatibility, cruise control, a Bose multimedia system, Bluetooth, voice command, dual-zone aircon, roof rails, 18 inch alloy wheels and of course cowhide on damn near everything else. But wait, there’s more! Too much more to mention in fact. The only option not included is the R10 000 navigation system. The German rivals – Q5, ML and X3 – offer arguably better cars with more badge cred, and they’ll lure you close with their seemingly comparable prices, until you realise they are all vanilla spec. Try matching Murano kit levels and suddenly the Nissan makes sense.