Richard Wagner would have loved the Mercedes-Benz GL. This operatic grandfather of modern heavy metal had this strange idea that one could combine music, drama, visual art and poetry into one monumental ‘total artwork’.

He called it ‘Gesamtkunstwerk’. Although it ultimately falls short, the huge GL tries very hard to be a ‘Gesamtkunstwerk’. It’s got all the classical underpinnings of a classy Merc, it’s definitely heavy metal and have we mentioned that it’s huge?

So is the name. The one we had on test is officially called the Mercedes-Benz GL 350 CDI 4MATIC BlueEFFICIENCY. Starting from the back, the BlueEFFICIENCY doesn’t refer to any green/blue hybrid electric engine, but rather to fuel savings brought about by more economical automatic gear shifts, tyres with less rolling resistance and better aerodynamics.

The 4MATIC is Merc’s name for its all-wheel-drive system, which we’ll get to later, the CDI means it slurps diesel (with blue efficiency apparently) while the 350 refers to its engine capacity of 2987cc. No, Merc’s engine nomenclature doesn’t make any sense to me either.

Visually the seven-seat GL is a Wagnerian opera on wheels. The face lift means a new radiator grille, strip LED daytime running lights, new fog lights, chrome underbody protection at the front and rear, new chrome tailpipes and more aggressive bumpers. The most aesthetically pleasing change is to the wheels with new five-spoke designs available in 19, 20 and 21 inch formats.

It’s a wagon with serious presence on the road. Like a Valkyrie on her steed, you’ll be able to look down on other lesser mortals sharing the road. Truly fit for a lady of the warlord escorting those slain warriors to Valhalla.

Speaking of which, you’d be able to fit a lot of slain Norse warriors into the GL. It’s more than five metres long, two metres wide and 1840mm high. You’d be able to prop six of them upright in three rows of proper seats – two of them surprisingly comfortably in the last row, three in the middle row and of course one next to the driver. It’s also easy getting in and out of the third row. All the seats fold flat with relative ease in case you need to stack your slain warriors horizontally. With all the seats in the upright position, luggage space at the back is minimal as with most seven seaters. The 360litres of space grows to 2200 litres with all the seats folded. A mini-spare run-flat wheel comes as standard, but you could spend R30000 on an optional external spare wheel carrier with a spare wheel. Not a bad idea if you have serious intentions of taking the GL into the bush. 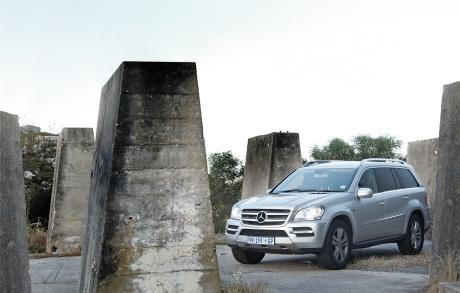 The interior itself has been redesigned, with new leather seats and a new 3D-like instrument cluster featuring multifunction displays accessible via the steering wheel. The seats deserve special mention. Merc’s seats have always been fantastic and these are even better. I wouldn’t mind putting them in every car I need to do a cross-country trip in. As always there are options galore, ranging from anthracite wood trim at R3200 to a rear entertainment system at a mind blowing R31100 to tart up the typical sombre yet classy interior.

The GL is an on-roader that can go off-road, rather than an off-roader that can go on-road. It’s still surprisingly capable in the rough stuff. Push a button on the centre console and the modified Airmatic system raises ground clearance to 307mm. When the going gets really tough you can lock the centre and rear differential. Electronic aids like off-road ABS, anti-stall assist and downhill brake-assist make life even easier.

The on-road bias is a definite bonus when it comes to the tarmac where the GL is going to spend most of its life. The tractable V6 turbodiesel is quiet and refined, the seven-speed automatic shifts seamlessly if you don’t insist on mashing the pedal every time you accelerate and the steering is light at low speeds and loads up appreciably at high speed. You’ll really appreciate this at 120kph since the GL weighs more than 2.4 tons and is relatively softly sprung.

It’s a superbly comfortable ride and body roll is never excessive, but don’t attempt the Elk test at stupid speeds. Rather brake in a straight line. Those huge callipers will bring the leviathan, travelling at 100kph, to a dead stop in less than three seconds and within 42 metres. That’s better than the figures achieved in the VW Citi Golf, which weighs a third of the GL, that we tested on the same day. Granted, the Golf had no ABS, but the GL’s braking figures were impressive.

In the end the GL is not quite the ‘Gesamtkunstwerk’ Wagner would have strived for. Maybe it’s the poetry that’s missing, but it does impress with Teutonic thoroughness as a comfortable cruiser that will carry seven people in luxury and perform admirably off-road.