One would expect a hatch that’s being touted as Mazda’s hottest-ever to arrive to huge fanfare, but instead Mazda SA has just silently filtered a few test units to select media. It’s as if the local arm of the Japanese carmaker felt huge trepidation about launching the new Mazda3 MPS after what journalists and customers had to say about the previous generation.

The first MPS should have been known as the most powerful front-wheel drive hot hatch of its time, but in reality its less powerful competitors were better to drive and to look at, due to the Mazda’s drab styling, sullen suspension and steering wheel-tugging torque steer.

To their credit, Mazda Japan has made a valiant effort to remedy many of the previous car’s failings as well as introducing a 41% stiffer bodyshell, thicker anti-roll bars, sportier shocks and springs, while dropping the kerb weight from 1 438 to1385kg.

So why not shout about its arrival?

By contrast, in the UK, Mazda has gone as far as setting up a select nationwide network of dealers to operate its new ‘Mazda3 MPS Specialist Dealer Programme’. Every ‘Specialist’ dealer will have a Mazda3 MPS demonstrator, two dedicated MPS sales staff, an MPS-branded area of the showroom and will be running frequent Mazda3 MPS customer events.

‘The all-new Mazda3 MPS is our fastest-ever hatchback, and we believe a more specialised approach is required to successfully market this amazing car,’ comments Mark Cameron, sales and marketing director for Mazda UK. He has a point: it certainly does look amazing and is probably one of the hottest things to come out of Japan since wasabi. 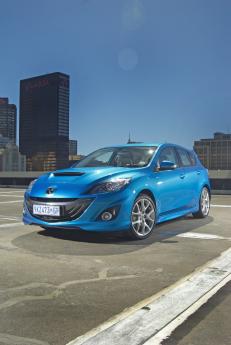 Can I get a scoop, scoop

Viewed in profile, it’s clear that Mazda designers have dropped the MPS’s plaid sweater for a karate gi in its transition from drab to fab, drawing on inspiration from some of the brand’s most engaging ‘flow-inspired’ concepts like the Furai, Ryuga, Kazamai and Taiki. Its pouty bumpers, Impreza-style bonnet scoop, chunky sideskirts and sharp spoilers remind you of a roadgoing Subaru WRC rally car – with a Peugeot grin.

Inside is better than before, even if the execution is not quite as classy or as well conceived as the rivals. The Type-R has more character and the Germans more premium tactile quality. Still, it’s not an awful place to be and the part-leather sports seats, red MPS detailing and racy LED boost gauge add to the performance message.

Does the go match the show?

Despite 190kW of power the previous generation MPS couldn’t break the 7.0 sec 0-100kph sprint mark when we tested it a few years ago. The new, lighter

version however returned a deceptively quick 6.85sec, albeit 0.6sec slower than the claimed time.

In comparison to its rivals, the 147kW Scirocco is fractionally quicker to 100, while the Mazda is faster than both the GTI and the Type-R. This iteration uses the same basic turbocharged 2.3-litre, four-cylinder, retuned to offer more limited torque in both first and second gear – presumably to limit torque steer. But slot the MPS into third and you are hit by a swell of power over 2500rpm that surges you up the road before it tails off at 6000rpm.

On track the MPS was a surprise. It stays remarkably flat and composed through the bends, the limited-slip diff tucking the nose in to provide excellent balance and grip. However, throttle modulation is key, as sharp inputs introduce a surge of power when you don’t need it.

The problem with having all this power under the reign of your right foot is that torque steer is amplified on public back roads, especially in the wet. Mash the throttle when exiting a slow turn and the sensation is flighty and fidgety, inducing more mild discomfort than the buzz that comes with proper driver feedback.

So despite ‘torque management control’, which monitors how much the driver moves the wheel and transfers less torque accordingly by controlling the throttle valve and wastegate, and that torque-sensing front diff, the MPS’s leather steering wheel often tugs away when you just want to go in a straight line. Ride quality also suffers a tad on back roads that aren’t pool table smooth, despite welcome changes to the new car’s spring rates. When the MPS encounters a bump mid-corner this becomes even more of an issue. Changes in surface or camber alter the line you have picked with the well weighted but slightly disconnected steering, changing the car’s trajectory.

Like the steering, the gearchanges are direct and accurate, only occasionally baulking with a rubbery notchiness when cog-swapping to second.

Although the Mazda3 MPS makes too many compromises to truly challenge its better rounded rivals, we would say it’s worth considering not only because it offers tremendous value but because it’s a huge improvement over the previous generation whose schizoid collection of attributes held little appeal in isolation and were only magnified in combination.

The newcomer’s compromises (lighter steering, harder suspension) actually accentuate the driveability of the package, imparting a highly enjoyable, yet flighty energy and a unique character that’s not for the faint-hearted.