Meet the Lexus IS 250 Compromise, SA’s newest Copperfield-spec tin-top coupe. Now, there are two ways this could go. The first is a purely analytical exercise. I tell you the price, then bury you in spec and stat, systematically convincing you that the IS 250C is superbly competent, well-engineered and a relative bargain. Which would all be true. But then the facts sometimes don’t tell the whole story, because subjectively it’s also boring to drive, with an uncanny ability to turn sprogs into wrinkly old men in mere metres. Fortunately not every car has to be the ultimate driver’s car.

Unlike the standalone SC430, Lexus’s second foray into the folding hardtop market is a thoroughly re-engineered and re-bodied IS250 sedan. However, it’s not just a case of deleting the rear doors and dicing up the roof. Of the exterior bits, only the headlights, bonnet, front door handles and side mirrors are common. Every other panel is new. Still, the vital visual connection is obvious.

In regular sedan form, the IS 250 is a wedgy piece of kit. In disappearing metal roof guise, it’s even more of a doorstop. Blame the Lexus flat-packers for the rising window sill line that kicks up dramatically at the rear. Their desire for a shorter, therefore easier to package roofline, results in a taller boot. So, like many retractable hardtops, it’s got a big butt. The advantage is a 553-litre boot that swallows the roof as well as a 9-inch golf bag. The disadvantage is a less airy glasshouse and limited visibility out the rear windows. In compensation, parking sensors and a reversing camera are standard.

It’s pretty plush inside too, with creamy leather offset by a soft-touch black dash that houses loads of executive toys. Hard drive-based satnav, heated seats and touch screen infotainment top the bill. Generous front seat accommodation is as per the sedan, but it’s far tighter in the two-seat rear. Despite electric slide and tilt front chairs, access is ungainly. If you’re taller than a Smurf and wider than a lamp post, you get in and out with all the elegance of a new-born giraffe. The seatbacks are vertical, the legroom minimal and it’s narrow in there. Best not to torture adults for too long. Cranial crushing complaints are more easily dealt with. You’ll have to stop the car and ensure the boot’s plastic divider is correctly positioned, but infinite headroom is only 21 seconds of roof-folding artistry away. Closing it is just as quick, with a kind of motorised anti-gravity smoothness that avoids the heavy ‘thwack’ of rival systems. 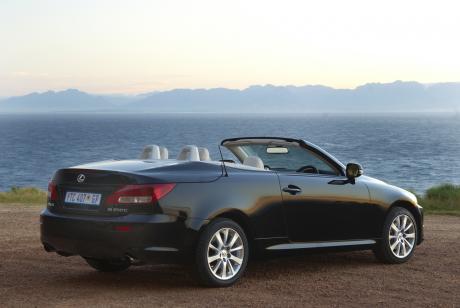 Apart from the 13 motors that orchestrate said roof ballet, everything else adjusts with a purposeful, servoed whirring – windows, side mirrors, seats and steering wheel. Add in the additional chassis stiffening and it’s no wonder it’s so heavy. How heavy? A kerb weight of 1750kg means the coupcon is 180kg heftier than the mechanically similar sedan.

That’s the kind of additional mass you feel under acceleration and faster cornering. Yes, the IS250C has a light and beautifully refined twirler, but it’s not that direct and there’s a momentary reluctance on turn-in. What follows though is a balanced cornering experience from a chassis that could clearly cope with more power than the 153kW its V6 can muster. Power delivery is languid, feedback muted and excitement nowhere to be found. It’s all a bit numb. In our acceleration runs, we just beat Lexus’s nine-second claim. Compare that to the 7.9-second time claimed by Audi for its soft-top 2.0T in CVT guise.

As if to prove it’s no sports car, stick the gearbox into Sport while stationary and it displays 4th gear on the digital readout. Hmm… Conversely, and rather annoyingly, it often holds gears long after you’ve paddle-shifted up. And that’s in quasi-manual mode for goodness’ sake. In the six-speed auto’s defence, changes are slick and quick enough.

But where this Lexus really excels is as a relaxed cruiser. The ride is composed and cosseting, absorbing bumps that would unsettle a 3 Series. With the roof up it’s quiet and very refined, with it down, hairdos remain unruffled. At cruising speeds, the cabin is relatively turbulence free, with just a hint of backdraught between the front seats.

But by their nature, coupcon’s are a compromise. They’re heavier and not as stiff as fixed roof coupes, weigh more than regular canvas top cabrios and their retractable lids gobble up boot space when stowed. BMW’s 3 is not as good value spec for spec, but has it solidly trounced in the performance and dynamics stakes, while Audi’s soft-top A5 cabrio whips it for looks and top-down practicality. Be that as it may, Lexus has built a fine example of the genre that builds on the brand’s reputation as a manufacturer of well-engineered, well-appointed luxury cars. See it as an executive convertible with the convenience of a hard top and not as a sportier IS250 coupe and it won’t disappoint.