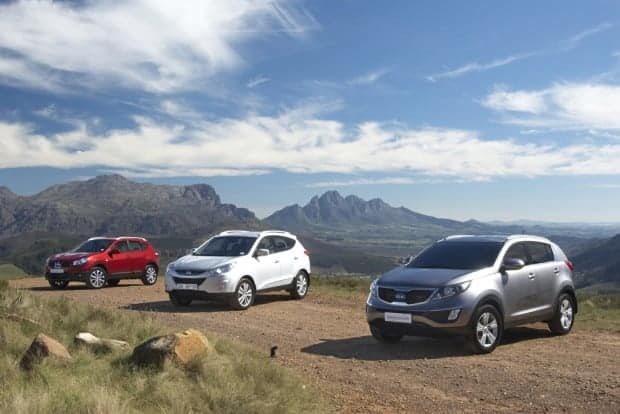 IT’S A FACT that in a crowd, the taller you are the better the view, especially in traffic. But then not everyone wants to navigate the daily grind in three tonnes worth of garage-busting SUV. Even if you have mega money and little conscience you’d have to work for the UN or holiday where there’s a tar shortage to really ‘need’ one. Which explains, in part, the growing appeal of the compact 2WD crossover.

Where the old Tucson was criticised for a lack of style, the fashion-friendly iX35 retaliates pretty emphatically, with better balanced proportions, pronounced creases and skilful sculpting. Just don’t stare at the front too long or the top half of the split grille turns into a whale’s blowhole and the whole hexagonal intake has been fenced in pinstripe chrome, like a teenage love letter penned in silver ballpoint. Barely noticeable on our silver test car, but a gaudy eyesore on the scores of darker hued examples already on the road – early sales have been prolific. Resist the urge to add a ghastly bull bar unless you plan on regularly bashing into stuff like pink cows or farm gates. So, apart from the fussy grille, a top effort from Hyundai.

No such issues with the new Sportage, which would look good even through a fish bowl. It’s a sci-fi meets Tonka toy marriage of poised, athletic stance, clean lines and solid surfacing. Dramatically cooler than its rivals, it aces our styling test.

Right up until the Koreans burst onto the scene, the Qashqai’s interior seemed perfectly pleasant. Now, you can’t help thinking it would look very nice in a double-cab bakkie. Not that quality is a problem. All the switchgear operates with decent heft and precision and the build feels impressively solid. What’s more, only the Qashqai has a soft-touch dashboard. The unyielding Seoul siblings counter with funkier styling and leather seats, though the Nissan’s generously padded cloth-covered pews are comfier. Bizarrely, cowhide is not even an option on the Qashqai. As with the exterior, the Hyundai has more sculpture to its cabin architecture, with a central X motif and liberal lashings of sprayed-silver inlays. It’s easily the busiest of the three with a fair amount of discord to the button shapes, though it’s by no means unattractive. The more restrained but no less functional Sportage mixes understated class with a hint of Amsterdam-by-night. Multiple backlit LCD screens emit a soft red glow like beacons in a dark grey sea. Amidst all the textured dash plastics lies a slick piano black HVAC section, minimal chrome embellishment and a prominently positioned, vermillion hazard button.

As far as kit goes, all three contenders offer the expected ABS, six airbags, central locking, dual-zone climate control, electric windows and mirrors with auto fold, cruise control and radio/CD with an Aux jack. The Koreans add USB and an iPod cable to the audio mix. There are other notable differences too. The iX35 boasts a handy rear camera display built into the rear view mirror. It seems odd at first, but you soon appreciate the assistance it affords. The Kia counters with equally useful rear parking sensors, power adjustment for the driver’s seat, a cooled cubby hole and striking LED daytime running lamps. The Qashqai offers bluetooth connection, rain sensing wipers and a steering wheel that adjusts for reach and rake where the Koreans merely tilt. Both Nissan and Kia feature an electronic stability program, the iX35 goes without. But the Sportage doesn’t stop there; in fact it stops everywhere, intelligently applying its brakes during hill starts, slow descents and even when deemed necessary in fast corners.

Despite mere millimetres separating overall heights, the Qashqai offers marginally less headroom, most notably in the rear. The answer probably lies in the Nissan’s higher ground clearance, which at 200mm trumps both Hyundai and Kia at 170mm and 172mm respectively, rendering their urban bias undeniable. The cabin’s slightly narrower too. All three have a 60:40 split rear folding bench. At 591 litres, the iX35 has the biggest boot followed by the Sportage with 564. The Nissan lags behind with 410, yet mixes it with the others in total utility volume when the back seats are folded. Beneath all three boot floors lies a full size spare – steel for the Qashqai, alloy for the others.

Sharing engines, transmissions, suspension components and wheelbase means there is precious little to separate Sportage from iX35 both mechanically and dynamically. A different damper setting here, a subtle tweak to the steering software there – ball hairs really. Driven back to back, it’s the Qashqai which most convincingly pulls off the cushy ride/taut handling paradox. Again, not by much. If these three were rollercoaster rides, you’d lose your lunch quickest in the Hyundai, followed a nanosecond later in the Kia.

There’s not too much to choose between the Japanese and Korean powerplants either. Hyundai-Kia Group’s all-aluminium 2.0-litre unit, codenamed Theta-II, now employs variable valve timing on both the inlet and exhaust cams. The result is an impressive 122kW peak power output, just 8kW less than the 2.4-litre. That’s 20kW more than Nissan’s four-pot can muster, though it’s a full 1000rpm higher up the rev range. Peak torque differs by just one Newton metre with the Qashqai’s 198 arriving at a highish 4400rpm versus Theta-II’s 197Nm at an even headier 4600rpm. Having torque peak that high makes for frenzied full-bore acceleration as the six-speed auto gearbox, a Hyundai-Kia in-house design, does its best to match your power request with the appropriate gear. The resulting harsh kickdown and soaring engine revs can be quite intrusive, leaving you with no option but to turn up the radio, back off the throttle or use the manual shift option. In its defence, actual gearshift quality and cog swapping speed is really rather impressive and it’s only an issue when you murder the throttle. Gently caress it and you’ll get along fine. A more caring, sharing attitude produces similar results from the continuously variable transmission (CVT) fitted to the Nissan. Driving like a hoolatic – a combo of hooligan and lunatic – profits little, and besides, I’d sooner chew my own ears off than provoke a CVT into a sustained, high-revving whine. But in fact we’ve driven much stroppier CVTs than the one in this Qashqai. It seems willing to work with you more of the time and the prospect of quietly cruising at 100kph with little more than a 1000rpm on the dial is very appealing.

The Qashqai simply doesn’t play by established compact SUV rules. It steers and brakes with more feeling and corners flatter than its rivals, without compromising on comfort. Occupants are treated to polished mechanical refinement and hushed NVH fine-tuning. Apart from the occasional harsh suspension thump, it rides with an authority usually reserved for cars considerably more grandiose. In many ways it’s the best car here. But it’s not the best buy.

Together, the Koreans have assembled an all round mechanical package that comes within a whisker of matching the Nissan’s core competencies. Thirstier but feistier, they then forge ahead with cheaper price tags and considerably more longevity to their warranties and service plans. Such good value has never been more fashionably wrapped. Both have been properly designed and each brand will have its loyalists, but of the two, it’s the better-equipped, more stylish Kia that invokes more desire.