Twenty years ago, an all-metal station wagon conversion of your single or double cab bakkie from Des Meano in Joburg was the hottest family/fishing vehicle out. Sani was also doing a good job of combining fiberglass and metal structures to make better and better Nissan Hardbody wagons.

Mostly though, the bespoke conversions were pretty crude: often short on passenger leg space, devoid of fancy interior cladding and mechanically unchanged. These were bakkies with a permanent hard-top.

Climbing into the Ford Everest 4×4 XLT feels like a trip back to those times and those vehicles. Except by a 90s yardstick, this one’s exceptional. The ribbed metal roof is all in one and graced with sturdy roof rails. The rear section aft of the wide section B- and C-pillars is square and upright, reminiscent perhaps of a Pathfinder, Discovery II or a, or a … GWM Multiwagon. The front section is neat, taking all the cues from the just facelifted Ranger, and while this is the third generation of Everest built in Thailand (and imported fully built-up), this is its first, fresh appearance here. Territory replacement it is not, however.

Out back, there’s a wide right-side hinged door with a proper catch to keep it open when required and a substantial step bumper that can take up some typical tailgate cooking and stuff stashing duties if its not too covered in mud or dust. Parked next to a Patrol it might look like an overtrained flyhalf against a solid prop forward early in the season, but on its own the Everest looks macho enough to cope with any loose scrum. 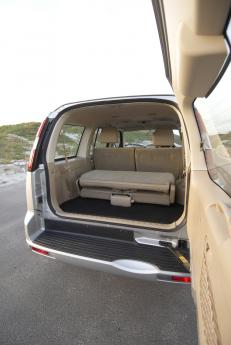 The 16 inch wheels shod with 245/70 section Bridgestone Duelers are going to be relatively easy to find replacements for when travelling north. The aluminium sidesteps are smart, but are going to be destroyed on the first deep hole outing in the bush. Most Everests probably won’t do that kind of duty. There are lots of plastic cladding sections over the wheel arches, on the flanks and on the rear door. Good on the looks front, and easier to replace than body panels, but these seem aimed more at style than substance. Likewise the flimsy cover on the rear-mounted wheel. Said wheel interferes with rearward vision, but not massively, while it imparts rugged 4×4 looks in the tradition established by the Pajero, Prado, Patrol and er … Terios. This arrangement also puts a strain on the swing door and the wheel mounting points when the vehicle is driven consistently on corrugated dirt roads. On the one hand, it’s easier to access when stuck and needing to replace a flat. On the other hand, there is space for another spare under the rear of the vehicle – or an additional fuel tank. Many hands, much debate.

Climb inside with a 90s mindset and you will be blown away. Carpeting all round, quality plastic finishes that are properly designed for fit, and a headliner that kicks up for the second row and contains vent controls for the aircon. Not to mention electric windows, proper fitted audio with what’s this, a CD player with Aux input capability and, believe it, power steering – almost a novelty twenty years back.

The square sides mean it’s airy in here, with lots of head and shoulder room. Sure up front it’s all like the Ranger that first went into the workshop, with all the things to love and/or groan about. You have to like the many stash pockets and sensible stowage areas, the simple stalk controls and absence of clutter, plus the assuredness of the lever actuated part-time 4WD system (with self locking front hubs, nogal). But get into post-noughties mode and you also have to ask, ‘where’s the cruise control, the steering wheel mounted audio controls, the traction control that can be switched out off-road, and who the hell decided on Bambi cream-coloured leather’.

Okay, so wipe the dirt off the front seats and then marvel at the acres of rear legroom – better than Ranger. The seats are well sculpted, well stitched and tumble forward using a single lever to allow access to the rearmost bench. They are split 50:50 however, which means a middle mannetjie for the middle person. Better they are a small person who can stretch out on the rear pew. Pity the rearmost seat only flips forward as a unit to create a wide and flat load area (unlike Fortuner with its sudden dip towards the second row seats and flip-up third row seats which jut into the load area). A shortfall is that it does not split or fold flat into the load floor, because sometimes five people are the passenger-loading duty, and that means lots of luggage. Seat up, there’s hardly room for two travel bags behind it, let alone a shedload of camping clutter.

Start her up and you have the solid truck-like clatter of the 3.0-litre TDCi. A brilliant, torquey engine that pulls from low down and will gamely chug up a mountain pass in the low gears and run at 140kph all day on the tar in the top cogs. Realistically it should deliver 10ℓ/100km in typical combined use, and happily it will swill almost any diesel on offer.

It’s mated to one of the most positive-shifting gearboxes in the bakkie-wagon sector, well matched to the leisurely shifts the diesel powerplant demands. The brakes feel adequate rather than brilliant, and the ABS kicks in fairly enthusiastically when the pedal is stomped on. Handling and comfort levels would have surprised a buyer from the 90s. The wheelbase is shorter than the Ranger’s 3 metres (it’s 2860mm, while the Fortuner at 2750mm is 335mm shorter between axle midpoints than the LWB Hilux double cab) so it feels more nimble and chuckable, plus the rear leaf spring pack has been tuned for more compliance and fitted with a rather iffy rollbar/stabiliser bar arrangement.

Solid axle, leaf springs? Yup, this is old school: reliable, strong, simple, easy to add a blade if you always carry more weight, easy to fix anywhere when something goes wrong, but short on axle articulation and less sophisticated than the multi links and coil springs of the Fortuner/Pajero Sport rivals. Up front, again the old torsion bar springs modulating the wishbone suspension, so more bakkie-like in the Isuzu/Ford/Mazda tradition than the trend-setting coil-sprung Hilux.

It’s also rated for an unbraked towing mass of 1200kg, around 450kg more than the Fortuner and Sport, which are rated to handle 1500kg braked. Then again, all these ratings are maximums to be kept well shy of. Many buyers will see the simple underpinnings as a strength. And the Everest handles pretty well for a bakkie, if not with the fluency of the coil sprung rivals. Body roll is not too alarming, it feels solid at speed, manages bumps well and with all that torque does get a bit rear happy on 90 degree turns. The steering is light at parking speeds, takes lots of turns for parking and obstacle course duties, but at speed feels better weighted than the Ranger.

What worries me is fitting a limited-slip rear differential instead of a locking rear diff. It’s fine in moderate terrain and needs less driver input, but when you are spinning on, say, a steep rocky section, the locked rear wheels will provide extra traction whereas the limited-slip diff will already be slipping.

I like the Everest. It’s a solid, honest effort, but perhaps a little late in the technology/lifestyle race. Ranger fans won’t fail to be impressed, but one also has to be swayed by the more sophisticated engineering of the Fortuner and Pajero Sport – which each have their niggling faults and oversights.

At R372 290 the Everest is by no means cheap, but it’s R30k less in 4×4 diesel manual form than the benchmark Fortuner. It’s even R17k cheaper than the equivalent double cab Ranger. Most likely the R331 490 4×2 Everest will be the best seller at its price point, though the R390k Auto version heavily undercuts the R426k auto-only Pajero Sport. The 4×4 is good, and tackles gravel roads and mud and sand with ease. It will make a great mild overlanding and outdoor lifestyle vehicle with a few modifications – though maybe not the pricey suspension upgrades the rivals require for demanding applications. But against the Fortuner and its ilk, it does feel like a step back in time.