There isn’t a blander arena in all of cardom than that of the booted, C-segment sedan, otherwise known as rental car heaven. Most contenders only survive as four-door fleet fodder, fit for everyone from the travelling salesperson to the middle manager. But it’s not a segment to be sneezed at. In any market situation, bread and butter volumes are essential. You would have thought that GMSA had the perfect car to capitalise on this with the value-packed, but bland-as-old-boot-soup Daewoo-sourced Optra. Perhaps age, brand adoption issues and nonexistent styling conspired to deter fleet buyers from trading in their Tiidas and Corollas. So in replacing the Optra, GM decided to go global with a brand new car, built for most world markets, including the US. They also decided to actually design it this time. Enter the first proper Chev to hit our shores in many a decade, the Cruze.

When it comes to memorable car styling, simplicity is key. Side profiles defined by a couple of continuous lines tend to stick best. VW’s three-arc Beetle for instance. In a world of complicated surfacing and fussy lines, the Cruze stands out. It’s by no means a classic, but the single-arc roofline, good proportions and clean surfaces make for an attractive sedan. Everyone I asked responded positively to the looks, with petrolheads crying baby Lumina. 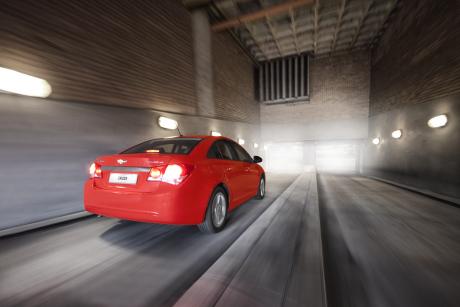 It may be distinctive, but I’m personally not much of a fan of the two-tier grille and the kitsch gold colour of Chevrolet’s enormous bowtie emblem. Gold is old and, as my wife says, it doesn’t go with everything, especially not the flat red hue on our test car. More clever is the way the clamshell bonnet shutline splits around the headlight, continuing down in a curve parallel to the wheel arch. It’s a visual trick that neatly reduces the otherwise long front overhang. Usefully larger than its targeted rival, the Cruze is 57mm longer, 28mm wider and 27mm taller than a Corolla

The good news continues inside where GM’s colour and trim department has injected some digital pizzazz into their CAD software. The result is a surprisingly cohesive mix of colour, texture and shape. Our top-line LT model featured tan on black two-tone leather, chrome accents and plastics in conventional textured black, piano black and perforated metal effect. Sounds garish, but works really well. Classy main instrument dials and a stylish steering wheel round it all off. It’s much more of an occasion than sitting in a Corolla. Build quality seems tight too squeak and rattle-free. In fact they’ve almost pulled off a genuinely premium cabin. Almost because it’s let down by a lack of squishy plastics, ill-fitting side mirror access covers and a central LCD screen that could do with a higher pixel count. Equipment and spec levels look comprehensive, with everything you could ask for from a range-topper at this price point.

As for practicality, the Cruze ticks all the boxes. It’s pretty spacious, the split rear seats fold flat and the boot is a sizeable 450 litres, though width is restricted by the rear wheel arches. Sacrifice the third rear passenger and you get a fold-out armrest incorporating two cupholders. Not quite fit for bubbly, but cappuccinos will do. Storage in the front is well catered for too, with a handy rubberised cellphone pocket and passenger, dash-top and central lidded cubbies to hide your loot in.

So far, so good. Foot on the brake, twist the proper key and fire up the 104kW 1.8-litre petrol engine. It’s a DOHC four with variable valve timing and it sounds reasonably subdued at idle. Select D and off we go. When driven sedately, or as the name suggests, when just cruising, there’s no drama. The six-speed automatic takes care of the shifts and the world is at peace. But when you need to take a gap, overtake or drive because you actually enjoy it, then things start to go awry. Compared to the so-called sports autos fitted to most German sedans, or the double clutch self shifters found in a growing number of mainstream cars, the gearchanges in the Cruze are ponderous. Add that to an engine that sounds frenzied at anything above 3500rpm and you get an uneasy relationship. Change up and the revs drop off dramatically, which would be fine if the volume difference wasn’t as marked. Accelerate briskly and the changes only take place near the redline, by which time the engine racket becomes positively intrusive. My wife said I should stop hurting the friendly American, so I stuck it in Tiptronic mode and changed up at 3000rpm. Apparently she could sense the engine sighing in relief. On the plus side, sixth gear at 100kph correlates to a soothing 1750rpm, rising to just 2000 at the national speed limit. The Cruzecan cruise. I’m pretty sure going for the manual would be more rewarding. It’s also worth noting that there’s a 110kW turbodiesel on the way too also a happier combo no doubt.

Powertrain aside, there’s a lot to like about the Cruze. Beneath the curvy bodyshell is GM’s latest compact car platform, one that also underpins the new Opel Astra. So it’s bang up to date, though it does without a multilink rear. Still, the suspension is supple and the handling fluid, despite a comfort bias that allows a fair amount of bodyroll. The steering lacks sufficient weight at speed, but is responsive, turning in without argument. The brakes, discs all round, have a tactile, progressive feel. Oh, and did I mention it’s very good at cruising.

As a replacement for the Optra, the Cruze can only be seen as an unqualified success. Against mainstream rivals, the case is not as clear cut. There are areas where it excels and areas where it trails. Pricing is compelling. Manual 1.6-litre L-spec base models start at R175k, rising to R245k for this range-topping LT. That’s great value. Cruze is also pleasingly stylish, with good build quality and a touch of glamour to the cabin. It’s an exciting new entrant and a worthy addition to the increasingly convincing Chevrolet brand. Less convincing is the booming engine which quickly quenches any desire to speed up your Cruze. There’s also a lack of heft in certain places. Witness the boot’s very tinny response upon closing or the flimsy feel of the seat height adjusting crank. But those are minor tradeoffs considering the price.

If you’re looking for a family sized automatic four-door, are tired of buying Japanese and you’re happiest in the middle lane of the freeway, then the Cruze 1.8 LT might be just up your boulevard.