THE FUSION OF explosive performance and parsimonious fuel use is the Holy Grail of contemporary fossil-fuelled motoring. However, the ugly, pesky laws of physics-based truth is that short of an unfeasible, radical reduction in vehicle mass, you can’t have both simultaneously. This situation has led to the appearance of the dual-natured car, evidenced by the increasing use of the ubiquitous Sport button. But ECU remapping-on-the-fly only goes so far. Current thinking, if you’ll pardon the pun, is that you really need two power sources: a potent petrol-fed motor to preserve the performance aspect and a zero-emission electric motor to boost efficiency. Enter the sports hybrid.

BMW hasn’t exactly rushed into the performance-oriented hybrid market, but the flipside is that its new ActiveHybrid range, in 3, 5 and 7 Series guises, should be properly sorted. Does the added complexity and mass of a battery pack, electric motor and associated ancillaries compromise the Bavarians traditionally sporting pedigree? Time to find out, starting with this, the most compact and sportiest of the three.

Bar the badging and standard satin-finish side window trim, the ActiveHybrid 3 looks just like the 335i sedan it is based on. So you get the same beaky nose, classic swept-back profile and 5 Series-aping rear. If you’re one of those hybrid buyers keen on making a statement, albeit a small one, opt for the 18-inch Streamline wheels as fitted to our test car. Exclusively available for ActiveHybrid 3, these lightweight aero-efficient rims add a futuristic, almost conceptual edge.

It’s all regular 3 Series fare inside as well apart from an energy transfer display within the rev counter area, which indicates when the battery is being charged as well as the electric drive status including a power mode for when the electric motor is providing additional boost during hard acceleration. As you’d expect, there’s a hybrid sub-section built into the iDrive-controlled menu structure visible on the central 6.5-inch display. It’ll amuse your friends for about three minutes as you scroll through all the obligatory energy flow, battery charge level, fuel consumption and electric motor usage skyline graphics. After that they’ll just get on with their lives. Miss this and the ActiveHybrid 3 logos on the door sills and gear selector plate and you could be blissfully unaware that there’s some electrification going on here. There are audible clues, but we’ll get to that later.

Monthly grocery shoppers will notice the shallower boot. About 90 litres, or 20% of a regular Three’s boot space, has been appropriated for the lithium-ion battery. As for the rest of the interior, it has all the basic luxuries you’d expect from a German executive. As usual though, there’s no shortage of optional equipment boxes waiting to be ticked on the order form, from all the latest driver assistance systems to a head-up display and surround view cameras. Cleverly, you can order your ActiveHybrid 3 in any of the regular 3 Series Luxury, Modern or Sport lines, as well as the M Sport package.

As stated, the ActiveHybrid 3 is based on a 335i, so the core of the drivetrain package is that car’s brilliant 3.0-litre turbocharged six-cylinder driving the rear wheels through ZF’s equally noteworthy eight-speed automatic gearbox. Peak engine outputs remain at 225kW and 400Nm of torque. The lithium-ion battery, rated at 0.675kWh, provides power for a 40kW/210Nm electric motor packaged within the transmission casing. The motor links the engine to the gearbox via an electronically-controlled clutch, which essentially replaces the standard automatic’s torque converter and makes electric-only drive possible.

Enough about the tech how does it go? Is it an M3-scareing Prius? Well, yes and no. Yes because given enough juice in the battery, total system outputs jump to 250kW and 450Nm, enabling 0-100kph sprints in a tested 5.5 seconds quick enough to keep that M3 honest. And no, because the super-slick automatic means acceleration is mercifully free of the CVT drone so prevalent in a Toyota Prius or Lexus hybrid .

It does mimic a Prius in other ways though, like when you ease off in mechanical silence and cruise around town like a German Ninja in slow motion. This is a good time to ask your friends to ‘listen’ to your hybrid and pocket some greenie points. The downside is that you do have to prod the throttle pedal with a feather duster to keep it in electric-only mode, especially if you want to get anywhere near the claimed 3-4km EV range.

But it’s in and around town where the hybrid aspect comes into its own. Pulling away from traffic lights and stop streets under electric power alone eliminates those times when an internal combustion engine is at its least efficient. Add in a stop/start system and a coasting function (limited to 160kph) that decouples the engine from the driveshaft on the overrun and it’s easy to understand the efficiency gains. On our 80km fuel test route, conducted with BMW’s Driving Experience Control switch in ECO PRO mode, we achieved an average economy figure of 6.6/100km. Interestingly, the car’s computer calculated we had added 8.9 kilometres to the tank range by choosing Eco Pro over Comfort mode.

It is fair to say that all the tech translates into savings at the pump. There are a few hybrid-specific quirks though, starting with the slightly odd braking feel when the regenerative braking system ‘hands over’ all remaining retardation to the friction of the brake calipers. You only really feel this when bringing the car to a complete standstill and it quickly becomes a familiar sensation. The only other minor quibble is that the petrol engine restarts after a coasting session were occasionally not as imperceptible as you’d expect. That aside, this Beemer is the best full hybrid car we’ve ever assessed.

The regular 335i sedan, as tested in topCar June 2012, is one of the most dynamically delightful cars around. It’s agile enough in standard trim, but the addition of optional variable-ratio sport steering amplifies its responsiveness. Despite weighing 135kg more, the AH 3 offers similar handling thrills because much of the hybrid gear is packaged low down between the rear wheels so as not to upset the car’s overall balance. We’d definitely also opt for the adaptive dampers, which at R10900 adds both greater depth to the ride comfort and a harder edge to the cornering dynamics when required.

At this stage you may be thinking that BMW has nailed the Holy Grail brief set out at the start of this report. In many ways it has mixes 335i-beating performance with the ability to consume a claimed 18% less fuel until you stack it up against its own in-house rivals. 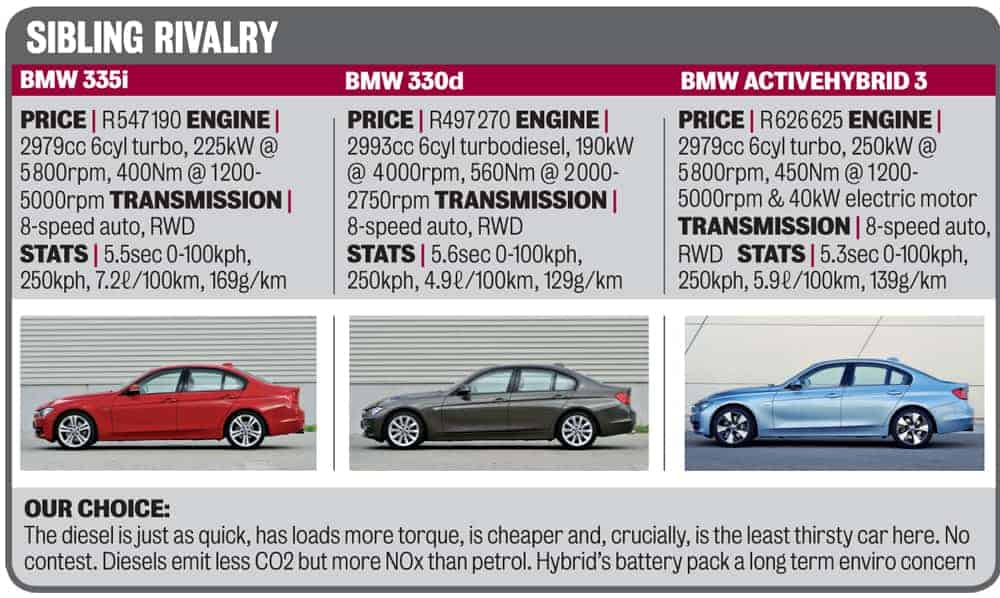 Setting aside the ultra-contentious subject of just how green hybrids are, what’s clear is that you’d need a serious aversion to diesel and a desire to throw R129k away if you chose the AH 3 over a 330d and just look at that turbodiesel torque figure! However, if you just can’t live without a freer-revving, better-sounding petrol engine, then save R76k and purchase the 335i. Even at R12/litre, the difference in sticker price will buy you a very compelling 6300-odd litres of unleaded…

So is there any real justification for the ActiveHybrid 3 in BM’s local line-up? Probably not. What would make it infinitely more attractive would be increased battery capacity with plug-in ability and a minimum 30km electric-only range. Then we’d be in more of a quandary.