Four doors usually earns the Sportback tag in Audi speak, unless you’re talking Avant. What then would transform the svelte A5 coupe with its bulging bonnet and eclectic mix of swells and dips into a four-door that had definable Sportback DNA? A3-style wagon treatment surely wasn’t going to cut the mustard. So began a five-year gestation period for Audi’s clever design teams. Wheelbase was extended, and new swooping roofline inked in to create the new profile – along with a host of details to support the design, including a narrower roof spoiler. Result? It’s as slippery as ever and retains the cab-back GT stance, but now has added practicality including massive bootspace courtesy of that clever new hatch. It doesn’t quite match the BMW 5 GT for ingenuity, though the overall shape is not as banana-ish as the Mercedes Benz CLS. With typical Audi precision, it hits the sweet spot between.

Three A5 Sportback derivatives are on offer from lowly 1987cc turbocharged four-pot with front-wheel drive and seven-speed Multitronic, to a pair of burly bent sixes – 3.0-litre diesel 3.0 and 3.2-litre petrol – both with quattro and dual clutch S Tronic automated manual gearboxes. So why would I choose the 3.2 petrol, hang the fuel bill? Two reasons really, not least that I’m your traditional petrolhead prone to enjoying an engine note that sonorously crests the 6500rpm mark (as opposed to the TDI’s 4500) when stirred via the wheel-mounted paddles. For sublime cruising the diesel would swing the debate with its lower emissions and pump-evading fuel habits, but on the meandering roads of KwaZulu-Natal and the Cape’s mountain passes, it’s the 75-kg-lighter, planet-devouring 3.2 that gets the vote.

Our test car is finished in an enigmatic dark metallic which the Audi catalogue refers to Amethyst Grey, perhaps more aptly Dark Gray(pe). Each muscular arch is filled with 18-inch alloys, another catalogue option that will set you back anything from R8000 to R12 000, though frankly a necessity considering the dire 17-inchers on offer as standard. Ornate headlamps and rear clusters are de rigueur across the Audi range, so it’s no surprise that the units on this premium coupe-hatch are particularly intricate. For adaptive lighting expect to pay an extra R4900, and a further R1750 for high beam auto-dim. There’s more, of course. 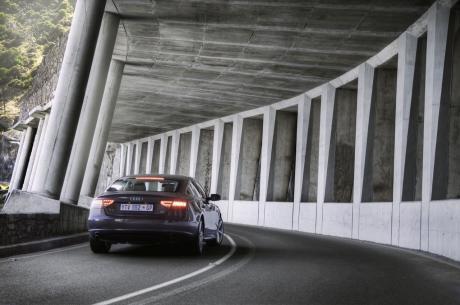 Climb aboard and it’s unmistakably ‘Audi’ in look, feel and arrangement. It even has that typical crisp, herbaceous Audi smell thanks to a half-acre of dark Valcona leather (R5900 option) covering the seats, headrest and door cards. The A5 is a low car, and with electrically adjustable seat configuring it’s easy to sink deep into the belly of this cosseting beast. Rake and reach is manually adjusted, enabling you to further fine tune your driving position.

Rear headroom is only slightly compromised by the low roofline, and legroom from the vantage of the rear bench is also fair. No gripe there. On the vehicle telematics front, our test unit is sans the optional MMI navigation option, though the standard MMI offers control over a plethora of vehicle settings and multimedia options. For MP3 connectivity you’ll shell out R3140, and Bluetooth hook-up will be another R3500. On the sound front, Audi’s baseline system does an impressive job, though audiophiles might be tickled by the premium 14-speaker Bang & Olufsen unit on offer (R6700). Buckle in and the seats grip convincingly, pedal placement is perfect too.

Fire up the motor and a subdued burble greets you; no six-pot howl here. The engine’s been moved closer to the driver for better weight distribution – not quite ‘amidships’ but every bit helps. Our test model is devoid of additional suspension settings, so simply slot the lever into M for manual, pull on the electric handbrake tab and plant that right foot. Shifts are rapid, almost seamless, and on the red line: second arrives almost instantly, then third, fourth, fifth and a stretch to sixth. Downshifts are the only real opportunity to exploit the paddles during hard driving. Power delivery is mismatched to the muted sound coming from under the hood, but the pace is irrefutable. Apply throttle for as long as you can safely keep it pinned, come off when approaching a sweeping turn and climb briefly on the assisted stoppers. Wait for the revs to drop till 3700rpm then upshift for a fizzy soundtrack. Enter the bend smoothly, wait for it to open up then feed in the power while relying on that tractive all-wheel drive to keep you on the rails. The steering weights up convincingly for an electronically assisted item, giving you the confidence to place the front wheels precisely on the black stuff. The body remains pancake flat through all of this, making it an apex-chasing delight at pace. The downside for me is a knobbly, almost wooden ride at lower velocities, along with a steering ratio that could be more direct. Active steer fixes the latter, at a price. The DSG box, too, could do with some refinement, its jerky downshifts in heavy traffic not always complementing the svelte exterior.

The Ingolstadt marque has successfully followed the industry trend to make and fill every niche and sub-niche imaginable. Where the initial A5 design felt every bit a coupe version of the successful A4, the Cabriolet and Sportback seem to massively overlap the established premium C segment model. On paper, the Sportback seems to offer little more than a clever boot over the A4 sibling, but that misses the point of the A5 entirely. It’s an all-new model range for Audi, and in Sportback guise offers bags of practicality without losing the sinuous coupe shape. At R503 500 it is priced well above the R451 000 Volkswagen wants for its 3.5 V6 derivative of the similarly conceived CC, yet it offers less performance and a shorter kit list. The other logical competitor is Mercedes’ ageing CLS which retails for R753 000 in 350 7G-Tronic form. If that makes the A5 look like a bargain, remember that liberal options box ticking, some of it essential to match dynamic and comfort standards (Audi Drive Select, Adaptive Cruise Control, sunroof, S-line sports pack to start with), could fatten the price sticker by R100k without even trying. Keep a cool head and upgrade wisely though and you’ll have a bespoke coupe with unrivalled practicality on your driveway – one we’d happily pick over those rivals.