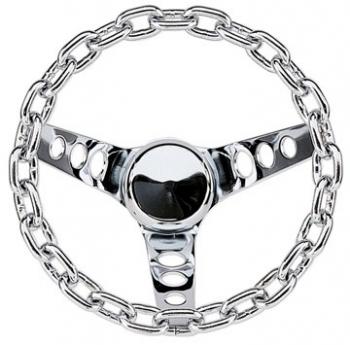 The iconic lowrider wheel, as fitted to Cheech and Chong’s Love Machine and countless other slammed Chev Impalas. No leather for your spliff’s hot rocks to burn, but have a crash and it’s as forgiving as a Saudi magistrate. Still available to buy new, but surely of dubious legality (on taste grounds alone)?

Holy steering wheel! Well, not really a hole, but there’s definitely a chunk missing – it’s more like a yoke than a wheel. Might be okay if you’re driving an F1 car with one turn between the stops, but not a Lincoln Futura with six. Knight Rider’s KITT went one worse, losing the bottom, too.

A bizarre asymmetric wheel was just the tip of the XT’s weirdness. Ugly, slow and with an instrument panel that looked like a screen shot from ’80s arcade racer Outrun, this boxy, boxer coupe is mercifully rare these days. That wheel probably looked much better once your wife had borrowed it for a few days, clouted a load of kerbs and rearranged the tracking.

Want to talk Quartic? Forget your Allegros, Rover SD1s and early ’60s Chryslers. None can hold a candle to BMW’s Z22 concept car, whose wheel looks more like a load of plastic explosive waiting to detach the door of a safe.

For the first 10 years of their existence, cars didn’t have steering wheels at all. Here’s Karl Benz’s 1886 tricycle, complete with what looks like a sickle strapped to a fishing rod handling the turning duties. This one’s wood – a carbon version with built-in shift light set at 250rpm (to help make the most of its 0.6kW) wouldn’t appear until 1888’s AMG spin-off.

In 1998, Idaho police received a report that an El Camino pick-up had lost control, careered into oncoming traffic and struck an ambulance head-on. Maybe the Chevy’s driver was just nostalgic for those tiller days, because officers discovered he’d been driving with no wheel, just a pair of Mole grips clamped to the column.

The must-have tiller for any rally jacket-wearing Mk1Ford Escort-piloting hoon. Like driving with one of those ‘witch’s hat’ playground death traps from the same era. Any more dished and you’d have to sit in the back and grow Howard Hughes-length fingernails to reach the column stalks.

It wasn’t only the Edsel’s overall styling that was a disaster. Fixing the gear selector buttons into the hub seemed like a sensible idea, particularly as the hub (and buttons) stayed still, like a Citroën C4’s. But 1950s electronics were unreliable and a shunt could leave the legend PRNDL embossed on your forehead.

Ever tried turning the wheel on a modern car with the engine off? Chevy’s hernia-beater in the days before power assistance was the spinner wheel, which featured a revolving handle built into one of the spokes, a bit like an OEM disabled handle. Perfect for driving while simultaneously blasting the cops with your Tommy gun.

Time too precious to waste on your drive into the waterfront each morning? You need the new Momo Qwerty. Presumably this wheel we found on the web is just a joke, but given Ferrari’s predilection for plastering buttons all over its wheels, we should be grateful they don’t make executive cars.