Subaru Outback vs Honda Accord Tourer

Station wagons used to be all the rage, then SUV’s stole all the thunder. How could a bit more load volume compete with the high seating position and a fashion statement that say’s ‘we’ve arrived’? Happens SUVs are also great for kids and dogs (sturdy interior materials and a more relaxed owner attitude to dirt), and for trips to country locations (bigger wheels and tyres, rated for higher loads). So it’s win, win, win over the wagon, surely?

Not so fast. Factor in more weight, more wind resistance and on balance higher running costs for a small step-up in utility that’s costing a whack when you add in the price sticker and fat insurance premiums. So that’s where an XUV comes in, the Crossover Utility Vehicle, which is lower and more car-like.

So how would it differ from a wagon, really? What better way to find out than to pitch our long-termer Honda Accord 2.2 i-DTEC Tourer Executive against the newly released Subaru Outback 2.5 Lineartronic – the quintessential XUV and the fourth generation of this very successful all-wheel drive wagon, now with a chain-driven Continuously Variable Transmission (CVT) and a fairly radical styling change.

Then we have similar external dimensions (apart from 175mm in height), similar performance on paper, similar levels of safety kit and spec, at least at first glance (from electric leather seats, to sunroof and good sound), and a yawning chasm in the price: the difference between R403k for the Accord and R358k for the Outback. 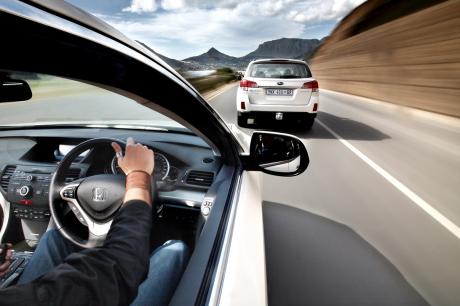 Drivers will find the petrol 2.5 thirsty against the 2.2 diesel, which is more frugal but let down by an overly refined tasted for ultra low sulphur fuel. Claims are 9.1 for the petrol and 5.9 for the diesel. You can probably add 30% to each of those figures for a more realistic consumption cost. Both have ABS brakes and EBD, but the Accord’s are sharper, pedal feel better and fade less evident with repeated use. Aurally too, there is not much to delight. The diesel flutters along, heavily muted at all but idle, while the Outback’s boxer is busier as it develops ideal power higher in the rev range, but remains uninspiring to thrash compared to its visceral Impreza and even Forester siblings.

The Accord has a low, low nose which means it hits every urban road bump and hump unless crossed over carefully. Outback makes good use of its 213mm of clearance to overcome its long nose and long rear overhang – which despite being trimmed and swept upwards in the latest update, are both still too long for more than the mildest of trails. The extra height makes getting in and out easier, especially important as the lumbar vertebrae start to decay, while the Accord is low down and a twisting stretch into the seat, all forgiven when powering cat-like along smooth tar stretches. Scooby handles the harsher bumps and jitters better, but tends to understeer when pushed, while the Honda only wags its tail at far higher speed thresholds. Honda has more feelsome, heavier weighted steering at pace and at crawl, even if the electrical resistance around centre dulls feedback, while the Scooby is slightly underweighted and over-light, though it’s exactly what most drivers will want.

An upside is one can load the Outback. Its self-levelling suspension means people and their stuff are handled without complaint, while the Accord shows its town bias and is begging on its haunches when more than a few suitcases are nestled between the intrusive rear strut towers. It can tow a braked 1700kg though, if you use Sport mode. The Outback will be just as, if not more capable in that department, despite the 1500kg max braked figure, and the all-wheel drive will make getting the boat launched on slipways or the caravan off grassy banks a cinch.

Both gearboxes are a little disturbing, pitting conventional auto against CVT. They both make for easy, undemanding progress as the mechanicals take up the gear-switching effort, and both get it wrong at times. The obligatory paddle shifters behind the steering wheel on both cars (Outback a little more prominent here) allow you to momentarily select the preferred engine whine. Accord is smooth, shifts rapidly, and holds gears longer in Sport mode. Leaving it to the auto means languorous upward cog swaps from rest and gears held too long on sustained downhills – until you learn to feather in some throttle. The Scooby’s chain-driven CVT is better than most, having less of the elastic, bungee cord quality between acceleration and upchanges. Still, it’s noisy, with chain thrash evident behind the constant drone of the engine. Horrible, really, so it’s best to override the system with the paddles and keep the foot as light as possible to make progress seem less of a strain.

Then there are the styling issues. At first glance both seem very similar. The Outback is underpinned by the recently revised fifth generation Legacy sedan platform, but given a bigger grille, fatter, lower bumpers, prominent foglight surrounds and a fat rear loading section (with seats folded flat the space is bigger than the Accord’s). It’s altogether bigger than its predecessor and, dare we say it, quite a bit uglier.

Call it the Legacy that took too many steroids, so it’s puffed up in the face department, and the deep, heavy bumpers give it an ungainly gym-junkie swagger. But it is also courageous design, which now appears more purposeful. The looks grow on you. By contrast the Accord is the city slicker. Low, wide and perfectly offset by those sharp Origami folds, which disguise a lot of flank volume and a very large rear. The roof rails and bootylicious rounded butt slightly confound the plot, but it’s a wagon after all, and it arguably looks better than the sedan. The surfaces are crisp and clean, the finishes better and the execution of all the trim and detailing far more precise and better engineered. The Scooby feels thrown together. Panel gaps are accurate, but there is less sense of panel integrity than on the super-solid Accord. Old Subaru cues like frameless windows have been tossed out in favour of stiffer pillars and styling normalcy on almost every detail. Subaru needs the volumes that Accord enjoys in other markets, and has taken cues from the Koreans on achieving the looks without the cost.

Ditto goes for the interior where the Scooby looks fine at first glance and falls a little on close scrutiny. Still, it’s a very pleasant place to be. I like the bold centre stack more than other testers, didn’t even mind that the mechanical handbrake has been swapped for a switch nestled in the dash to the right of the driver. The controls are predictable and standard fare, the aircon switchgear an interesting premium take, though a fair jumble of assorted functions are hived off to locations near the new parking brake switch. The panels and dash top are not soft touch, but this befits its XUV role. It all does the job, just won’t excite. Ergonomics are fine too, with plenty of headroom and legroom, supportive leather-clad seats and a stacked array of toys.

As per the exterior design, the Accord scores higher on every count. Superbly weighted and well designed switchgear, arcing swathes of soft touch fascia, subtle wood finishes and well-judged niceties like cupholders and stash pockets are all there. Adding to the premium feel is the array of comfort and convenience kit – from heated and electrically adjustable passenger and driver seats through park distance control, brilliant 12-speaker sound to the electric sunroof and remote controlled tailgate. All quality items, always a pleasure to use.

So how do you possibly rate these outwardly similar but in reality very different offerings. Confident, quality city slicker and highway wagon in the Accord, versus a robust and slightly quirky all-rounder like the new Outback. The Accord is the better driver on good surfaces, more economical and better finished in almost every respect – at a price. The Outback is objectively less stylish inside and out, quite a bit thirstier, and has that irritating CVT. But it will go more places with a bigger load, so that weird gearbox interface recedes into the background. Perhaps when the 2.0-litre diesel arrives the equation will have to be recalibrated, for despite the R48 000 gap, the Accord is the better car. Thing is, the Scooby offers the magic trick of being able to pretend that dirt rather than tar, and camping trips rather than school runs, take up most of the travel time.