They say you’re never more alive than when you’re having a near-death experience. Since I’m having one roughly every thirty seconds, this is clearly going to be one heck of a day.

I’m behind the wheel of a Ford Figo, on the first stretch of a drive thatâs supposed to take us from New Delhi to the historic city of Jaipur some 300km down the road, and I can’t even make it out of the parking lot of our hotel.

Busses belching diesel fumes, hundreds of small Tatas and Maruti Suzukis, three-wheeled tuk-tuks and motorcycles, some with the whole nuclear family on board, are dismissively ignoring my insipid efforts to gently ease into the traffic.

Everybody seems to be blowing their hooter at the same time. After cricket, blowing your own horn is the national Indian pastime. I, however, am stuck and so is the whole convoy of lime green Ford Figo‘s behind me. 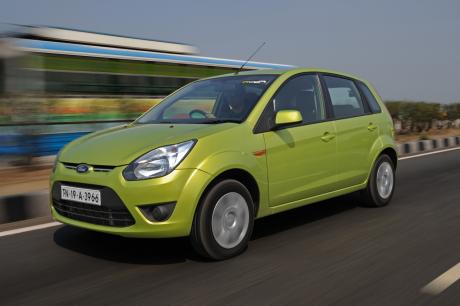 A hotel employee takes pity on us. Like a Hindu version of Moses he calmly steps into the mayhem, holds up his hand and parts the sea of traffic so we can start our journey. Amazingly, nobody shoots him or tries to run him over. He doesn’t even get the middle finger. Not once.

So road rage might be the one thing you probably won’t encounter on Indian roads, but the insane assault on your senses will make up for it. All kinds of wheeled objects are coming at you from all angles. The guys behind you are hooting to let you know they’re coming past. The trucks in front of you have large signs written on the back imploring you to ‘Blow Horn’ if you’re in their blind spot. There are no lanes, no traffic lights and apparently no rules. After ten minutes I’m ‘Blowing Horn’ with the best of them.

But don’t toot your hooter at the holy cows wandering serenely into the traffic. We’re warned the locals don’t like that. They might just pelt you with rocks. It’s not just the cows you have to look out for. Stray dogs, camels pulling carts and the odd elephant or two add more spice to the mix. Throw in some crumbling roads, meandering pedestrians and wobbling cyclists and you have a hot automotive curry that will blow your mind.

Ford reckons its new Indian developed Ford Figo is the perfect little hatch for this subcontinent’s burgeoning car market. And that by default this robust entry level car, based on previous generation Fiesta, fits just as neatly into the hole left by the retirement of Volkswagen’s CitiGolf in South Africa. That’s why, in July, we’ll be the first market outside India to receive the Figo

There was very little wrong with the old Fiesta, and there’s even less wrong with the new Figo. Even though the stiff chassis â the basis for one of the best-handling small cars on the market has been offset by a more compliant suspension to cope with potholed roads, the Figo remains a fun car to drive. Gearshifts on the fivespeed transmission are precise, and the power assisted hydraulic rack and pinion steering has only been slightly tweaked for easier use in heavy traffic.

The proven 1.4 litre Duratec petrol engine and 1.4 Duratorq diesel engine remain the powertrains of choice in the Figo. We drove the diesel, a turbocharged common rail direct injection unit good for 50kW at 4000rpm and 160Nm at 2000rpm. Even though we never managed more than 100kph in the heavy Indian traffic, the engine coped admirably and economically with the best (or is that the worst) the roads could throw at us. Personally I would have like a bit more get-up-and-go below 2000rpm, especially when driving in the city.

The major revamps were saved for the interior and exterior of the Figo. Ford India has borrowed some of Ford’s new kinetic design cues to reshape the grille and fenders, enlarge the headlamps and modify the tail lamps. It’s not ground breaking, but it enables the Figo to pull off the modern small car look quite successfully.

Thankfully the coral pink dash of the test cars we drove in India will be replaced by a conservative black surface once the cars reach our shore, but ergonomics and instrumentation have been improved. On the face of it the cars, produced at the Ford plant in Chennai, have been built solidly. We had no rattles or squeaks on our test car over some pretty challenging roads.

The cars come highly specced and Ford will probably follow an aggressive pricing strategy to grab market share, something Renault has done quite successfully with the Sandero

You would be able to buy a Figo without ABS, airbags, aircon and radioCDMP3 unit for around R100000, but these cars will be aimed primarily at government contracts. Expect to buy a petrol Figo with all of the above for roughly R110000, with a diesel costing up to R130000

That’s not bad, I thought as I arrived back in Johannesburg, marveling at our blue sky and how neat and orderly everything suddenly looked. Ford had seemingly taken a leaf out of Volkswagen’s CitiGolf book by revamping and rebranding a popular older car and selling it for less to first-time and budget buyers desperately looking for transport. Very clever.

But remember, Ford’s only taken a leaf. The book still belongs to Volkswagen. Enter the ‘new’ Volkswagen Polo Vivo, a South African designed VeeDub with 70% local content based on the previous generation Polo

Itâs also a lot cheaper than the current Polo. Itâs even cheaper than the old Polo it’s based on. VW says itâs all those Vivo parts now being manufactured locally that make the car so much more affordable. That and some cost-cutting here and there on the exterior and interior.

So R110000 buys you a decently styled, reliable four-door 1.4-litre Vivo hatch with airbags and power steering. ABS will be an extra R2000 though. You want air conditioning? Thatâs another R7200. Alarm and central locking? Radio/CD/MP3 player? Itâs all going to cost you extra

But itâs still a Volkswagen Polo, one of the best-sellers in our market, backed by an extensive dealer network, large parts supply and almost guaranteed good residuals. Has Volkswagen issued itself another licence to print money?

We suspected as much, but just to make sure we tried to duplicate our Indian trip in the Figo with a local road trip in the Vivo. To be honest the road from Port Elizabeth to Cape Town is nothing like the road from New Delhi to Jaipur, even though we tried to make things exciting with a detour through the Langkloof

Our roads are excellent, our scenery spectacular, our road manners (for the most part) exemplary. No elephants came wandering onto the N2 outside Knysna. The cows were safely behind fences. And no one hooted. Not once. And I covered twice the distance in the same time it took me to complete 300 Indian kilometers.

Travel does indeed broaden the mind. We sometimes forget how good we have it here. One thing was similar though. And that was the feel of the Vivo compared to the Figo. Like the Ford, the Vivo is built on a solid platform, a platform that’s stood the test of time and had most of the bugs ironed out.

The styling, combining elements of the old Polo with the new corporate face of Volkswagen, is attractive in a conservative way. The interior is good, even very good for a car in this price range even without mod cons like electric windows in the front.

The 55kW 1.4-litre I drove from the Eastern to the Western Cape was a perky performer and hummed along economically at 120kph at sea level with only the driver as dead weight. Up at Highveld altitude the more expensive 77kW 1.6-litre makes more sense, but itâs also considerably more expensive at R136900 for an entry-level hatch. There is no diesel in the range because only the petrol engines are produced locally. Diesel engines would have to be imported, which would ramp up the price yet again.

And price is important. The sweet spot Ford and Volkswagen are aiming for is the R100kR130k range, where Hyundai‘s i10, Renault‘s Sandero and highly specced newcomers from India and China have picked up market share. Expect this segment to be the coalface of the South African automotive industry in 2010.

With their battle-proven Vivo and Figo, both Volkswagen and Ford have launched strong contenders into the lower end of the market where value-for-money shouts as loudly as brand and reputation.

Will a first-time buyer thatâs done a bit of homework prefer a Volkswagen or a Ford over a Chinese or an Indian car? Did the ancient CitiGolf outsell every other car on offer even right up to its mercy killing?

Boil it down to a choice between the Vivo and the Figo, if you like. The Figo‘s styling is more youthful, it’s more fun to drive, the transmission is sweeter and there’s a diesel in the mix. The Polo‘s got the better interior, the stronger reputation and there’s a 1.6-petrol and a sedan in the range. But if weâre talking value for money, and we are at this end of the market, the Figo with aircon, radio/CD, ABS and airbags all for around R110000 gets our vote. Score one for Bollywood.