When Ford’s Fiesta was released in 2009, its daring aesthetics inside and out, plus the multitude of toys it had on offer, immediately gave it the edge over B-segment rivals and caused the world’s motoring press to take notice with meerkat-like enthusiasm. Underlying that innovative body shape was a great Ford chassis which – combined with a fizzy range of petrol engines – made Fiesta capable of a truly dynamic driving experience. Nothing’s changed. Ford’s first attempt at a widely desired ‘world car’ has been a runaway success worldwide, and even in SA sold nearly 8000 units during 2009.

Strike one for Fiesta. Nothing’s changed except the landscape, and Fiesta’s biggest challenge now comes in the shape of an old rival made new. The new Volkswagen Polo shares its design language with the Mk6 Golf and Scirocco, and the most immediate effect is a car that looks grown up and confident when parked opposite the Fiesta. Covered in white, the Polo looks especially cool as ice compared to the frenetic and complicated Ford. Different approaches, same goal. Your money, they both want it.

Lines. They are everywhere. As you circle the Fiesta you’ll see them in the shape of cuts and creases, rising and falling, splicing and converging along the flanks and over the accentuated arches. Ford’s design is clearly the busier of the two, with an intricately chiselled visage featuring that signature trapezoidal grille and raked-back headlamps. At the rear the assortment of design swooshes culminate in that neatly tapered rear end. The tail lamps are geometric, sharp, and lend machismo to a shape that tends to the delicate end of the spectrum. A boot spoiler runs the length of the rear windscreen and while aerodynamic benefits might be marginal, visually it completes the design and cements the sporty nature of the effervescent drive the Fiesta offers. In each beefed-up arch you’ll find 15 inch (these were considered big once) alloy hoops of somewhat forgettable design. 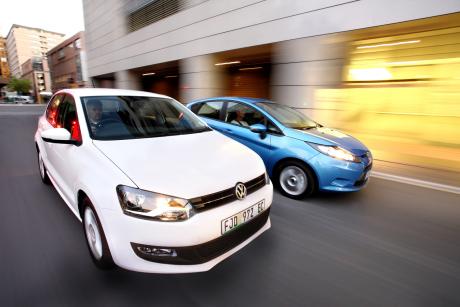 On the alloy front the Polo does no better, offering a flat and Germanic place to locate the rubber. The rest of the Volkswagen initially comes across as the antithesis to Fiesta with flat sides and geometric dimensions, but look closer and you’ll notice a comparable number of details darting under the skin of the body. Most visible is the ‘tornado line’, VW’s marketing talk for the pair of shoulder lines that run along the base of the side windows and diverge completely by the time they reach the pronounced hips of the rear end. Almost-square rear lamps initially seem at odds with what’s come before from VW, but on the new Polo they work. You could say new Polo simply ‘works’. A familiar ‘flip-up and release’ VW emblem occupies centre stage as the catch on the near vertical hatch. Narrow C-pillars translate into better rearward visibility for the driver, a lighter greenhouse for rear occupants and potentially easier stowage. Up front it’s all business. I have no doubt that even in econobox 1.4 spec, the sight of one bearing down on you in your rear view mirror will hasten a move over to the slow lane, such is the clinical aggression it exudes. The grille and angular, intricately detailed headlamps extend almost horizontally across the nose, with similarly straight lines echoed in the bumper and jutting chin, endowing new Polo with a masculine jaw. The result is more ‘pressed suit’ against the Fiesta’s flashy ‘superhero spandex’. Both exceptionally well crafted, both very different.

Climb aboard both cars for more evidence of exuberance versus restraint. Last year the Ford’s cellphone-inspired centre console was revolutionary, today it looks slightly dated. Still, it is enabled for Bluetooth, MP3, iPod and Aux, and you even have the premium-car perk of voice activated phone dialling.

The cloth covered seats are deep and comfortable. Finding a good driving position is a process of note, since you can adjust seat height and rake and reach on the multi-function steering wheel. My only concern is for the unlucky rear bench inhabitant who sits behind me: that beautifully sculpted rear end unfortunately means slightly less leg and ceiling room in the Fiesta compared to the boxier Polo

Voice activated dialing excepted, the Polo matches the Fiesta blow-for-blow in multimedia largesse, and adds a superior sound system. The seat configuration is equally tweakable, but supplements your experience with Gucci-bagfuls of style and loads of convenience including a cruise control function. Both vehicles employ soft touch (read squishy) dashboard plastic and both appear equally well put together, though the Polo exudes Golf levels of quality and trim with markedly better materials used throughout.

The steering wheel is VW’s typically elegant three-spoke design, its simplicity in stark contrast to the futuristic helm of the Fiesta.

Both interiors lead the segment. They feel tactile, purposeful, and boast a choice selection of textures, surfaces and the occasional leathery insert. This time VW has omitted its clunky (and often broken) dash-mounted retractable cupholders and opted for conventional ‘holes’ ahead of the gear lever, a near match of the Ford’s arrangement. Ergonomics on both cars are equally sound although in the Polo everything falls to hand quicker. If you’ve driven anything emanating from the Volkswagen/Audi group in the last decade it all feels instantly familiar.

A racing circuit may not be the home turf of the middling mini hatchback, but a short stint around Killarney provides invaluable insights into the drivetrains and chassis of each car on the limits. The Fiesta is first out the gates and immediately feels like the quicker beast. It’s not. Its 0-100kph time of 10.30 seconds is eclipsed by the Polo which, despite feeling less urgent barrelling along the straight, crosses the 400m (quarter-mile) line in 17.36 seconds. The Fiesta crosses the same line in a fractionally slower 17.39. This slight advantage is repeated everywhere else except on the overtaking front where the Fiesta trounces the Polo, with our 60-100kph and 80-120kph tests giving almost a full second’s advantage to the Ford. We attribute this advantage to a combination of superior low down torque and slightly shorter gear ratios.

But while the peppy Ford loves to rev and hops off the line like a rabbit, it’s shorter shifts do hurt it on the highway where a cruising speed of 120kph means the revs are soaring just under the 4000rpm mark in fifth gear. There is no sixth gear in either car but the Polo’s top cog offers longer legs, further contributing to the car’s ‘mature’ ambience.

Both cars deal amicably with Killarney’s five turns with the Polo offering up predictability and precision (and a hint of boredom) against a wilder, rather more ‘fun-filled’ experience in the Fiesta. It could have been better, as in all fairness, our test car from Ford did have 15 000km under its belt and its tyres were not quite as fresh as the Polo’s. Both cars provide potent stopping power, which takes getting used to in the stop-go daily traffic jams these cars will naturally inhabit. While not strictly grabby, both cars can catch you by surprise. If nothing else it explains why the dashboards are so darn squishy.

Make no mistake, with new Polo and Fiesta, VW and Ford have pushed the envelope on what is achievable in a small car. It’s a feat helped by the fact B segment vehicles have swollen to the C-segment dimensions of two or three generations back. In fact the rivalry between these two flyweights is a fair parallel to our recent punch-up between the Golf Mk6 and facelifted Focus. In that case there was a clear-cut winner in the Golf; here the competitors are a lot more closely matched.

Fiesta is a fun, capable, hugely attractive hatchback that’s grabbed the attention of people who are no doubt equally exuberant and extrovert. Polo is already hugely accomplished and is almost dead certain to become the new market leader – it is that good.

But this is no stalemate as pricing is still an issue. While close on paper, the Polo’s sticker does not include a warranty or service plan, which has become a R9 000 option, so making the Polo more expensive after all. Then there’s the badge to consider. Volkswagen has been on a hard charge to premium lately, and Ford has done admirably to restore its name as a serious producer of good cars, but in sunny SA brand loyalty has placed more bums in the ‘people’s car’ to date. You can expect that trend to continue.

Yet that’s not where personal preference ends in deciding the victor, as the single biggest divider between them is, oddly enough, the age of the buyer. The Fiesta satiates every desire of your average 25-year-old and younger driver, whereas the Polo ticks all the boxes for someone 30 and over. Sure there’s massive overlap, but truth is where the Ford tries hard and succeeds, the Polo does not really break a sweat to prove itself. The Polo takes it.