Until recently, if you wanted a really compact SUV on a tight budget you had to choose between an aging Daihatsu Terios or the dinky Suzuki Jimny. Then, like a gun-slinging John Wayne, along came the Nissan Juke. Suddenly, all the desirable SUV traits of a higher seating position and tall ground clearance without the weight and size drawbacks became an affordable reality. Despite a challenging aesthetic, the Juke has had things all its own way. Now two new contenders in the shape of Renault’s Duster and Ford’s EcoSport have joined the fray. Fight on…

Like Justin Bieber opening for Pink Floyd, the Juke draws a mixed crowd. Its six-eyed fat-lipped face, bulbous wheelarches, reverse-rake rear pillars and sheer individuality polarise opinion like little else. You either adore the trendy, oddball blend of sporty hatch and compact SUV – or you want to kill it with fire. Ford’s EcoSport is far easier on the eye. Perhaps too easy. Ovoid, like a rugby ball on wheels, it looks too narrow for its height, an effect exaggerated by blacked-out lower panels that visually raise the body. Bizarrely, Ford’s sales brochure quotes a wading depth of 550mm… in case it’s flooding at the mall, perhaps? And doesn’t that rear swing door-mounted spare alloy look out of place on an urban-friendly front-driver? Still, its location increases boot capacity and doesn’t hinder rear visibility. Despite these attempts to man-up the Fiesta-based crossover with pukka SUV design tricks, the EcoSport is still the friendliest, most broadly appealing exterior design here.

Duster designers opted for a more traditional SUV approach with a rugged, squared-off shape and geometric details. The blistered ’arches are a design masterstroke that emphasise width and perceived capability. Be warned though, when dirty, those extended satin-silver door sills do a great job of painting your pants on exiting the vehicle. Launched in Europe more than three years ago, the Duster’s no paragon of style but it is unpretentious and has aged well, apart from an outdated slatted chrome grille.

The late arrival onto the South African market means that our Indian-built Dusters benefit from a major interior upgrade that includes new facia architecture. Dynamique spec, as tested, features a touch-screen sat-nav and audio control unit that adds a cool, smartphone app-like feel, but is not without its quirks. While the display switches on instantly, the touch sensitive aspect takes a little while to warm up, and there’s no View Map-type shortcut for when you want live tracking. On the whole, the cabin feels tightly assembled, the plastics just as hard as the oppositions’, the rubber mats easy to clean and overall it seems well-equipped. There are compromises … no one-touch auto up or down for the driver’s electric window, no auto-on headlamps, no auto door locking function and the electric mirror buttons are obscured by the handbrake. But then the Duster is much cheaper. Apart from the doors that shut with a hollow tinny-ness, inspect the cabin’s nether regions and you’ll see where a little of the money has been saved. Look at the hand-cut inner liner where the handbrake lever pokes through the housing, the roughly finished metal of the seat runners, the rudimentary seat height adjustment mechanism and the exposed screws in the drinkholders and door handle recesses. It all works, but the attention to engineering detail lags behind the other two.

By contrast, the Ecosport’s heavier doors shut with a reassuring thud and you’re greeted by a facia seemingly styled by the same team responsible for the Millennium Falcon – all jutting, angular surfaces loaded with buttons. Leather seats lend a premium feel, adding to the list of useful kit such as auto-on lights, rain-sensitive wipers, voice control, cruise control and a one-touch electric window switch. The Ecosport does without the Duster’s rear parking sensors, but has the strongest set of cabin storage spaces even if, at 362 litres, it can’t match the Renault’s 475-litre boot capacity.

At 251 litres, luggage space is not a Juke strong point. Where the Ford exposes its spare alloy on the rear door and the Renault its full-size steel spare under the car, bakkie-style, the Juke hides a space-saver beneath a false floor in the boot. Apart from the Duster’s sat-nav and parking sensors and the Ford’s auto headlamps, voice control and leather, it matches all of its rivals standard equipment items and adds electric folding mirrors, a starter button and an automatic function to the air-con. The Juke’s interior trump card, however, is that it manages to be both stylish and fun, mixing sporting themes – spot the motorbike fuel tank, diving flippers and scuba gear – with slick design and solid build.

Power to the masses

Now before you question why we’ve pitted a petrol against two diesel-engined rivals, bear in mind that Ford’s fabulous 1.0-litre EcoBoost turbo petrol is an engine-of-the-year winner, the Juke’s diesel is an interesting new addition and the Duster’s character seems best suited to diesel motivation anyway. Back to Ford’s 92kW turbo triple, which, in this application is slightly laggy and not quite as punchy, but thanks to its offbeat thrum and general enthusiasm is not short on character. Although the EcoSport is said to use 5.7ℓ/100km on the EU combined cycle, you’ll probably find mid-eights more realistic, especially if your daily drive involves a hilly freeway. It’s then you notice how much harder the engine is working and that it’s missing a sixth gear.

When it comes to efficiency, the Juke has a few tricks up its sleeve. Besides a six-speed manual gearbox, it’s the only car here with a stop/start function as well as a choice of three drive modes. Usually these systems feel gimmicky, but swopping between soggy-pedal Eco and razor-throttle Sport in the Nissan is properly tangible. Hit the Sport button part throttle and the revs jump, the car suddenly performing just as you’d expect a sporting hatch with 81kW and 260Nm on tap would. Poles apart is the Eco mode’s tardy, laid back nature that encourages a relaxed driving style. Nissan’s optimistic combined cycle claim is 4.2ℓ/100km but we managed a still impressive 6.1 over the test period.

The Duster uses an older version of the Nissan-Renault Alliance diesel engine and so does without the Juke’s variable-geometry turbo and more efficient pump. It matches the Juke’s forward gear ratio count, but misses out on the drive mode selectability and generally sounds more agricultural. Although considerably larger, it weighs 115kg less than the mechanically similar Juke – perhaps it uses less sound deadening material? Torque and power outputs from its 1.5-litre turbodiesel are slightly down on the Juke’s at 80kW and 240Nm, respectively. The Duster’s no sports car, but pressed, the power comes on strong in a narrow band between 2000 and 3500rpm. The accelerator pedal has a spongy action, but then like a sponge, the more you squeeze the more you get out.

Also sponge-like is the Duster’s suspension, soaking up bumps far better than the other two. Apart from the absorbent ride, it feels a bit like a bakkie-based SUV to drive. Blame the diesel soundtrack and the somewhat vague elasticity of the hydraulically-assisted steering that just isn’t as direct as the oppositions’ electric set-ups. The Ford has the lightest, most city-friendly steering action, but the Juke is the most fun to chuck around a mountain pass. Only the Ford and Nissan boast traction control while only the Juke has disc brakes all round. All three use a MacPherson strut-type front and torsion beam rear suspension layout. The Duster’s softer suspension results in the most lateral roll but then at 205mm it wins the ground clearance stat-off, narrowly beating the EcoSport’s 200mm, with the Juke’s 180mm a distant third. All three will traverse a gravel road without trouble, but it’s the Duster that’ll feel most at home there.

In the end there’s no punch line because none of these cars is a joke. Each one has a set of strengths and inherent weaknesses specific to its design. The Duster is the most spacious, has the best ride quality, is the most affordable, but is also not as refined or as sophisticated as its two rivals. The Juke is the most expensive, has a tiny boot and the most polarising looks, but is easily the sportiest yet most frugal, is the best built and its cabin has the most charm. The EcoSport has the widest exterior appeal, is the easiest to drive with the lightest steering and is a tidy handler. However it’s not as precisely built as we’ve grown accustomed to from its Cologne counterparts, and despite a truly great down-sized turbocharged petrol engine, it’s not as economical in reality as a larger capacity diesel. So, which one would we take home?

If you love its frog suit, can stretch to R264k and don’t require much space, the Juke’s your car. For many, us included, those three criteria rule it out. On paper, the Duster should have this contest licked. Its size, drivetrain, equipment and sub-R220k price tag appear as exceptional value … the thing is, you can see where money has been saved. Still, there’s an honesty to the package and a real sense of utility that perfectly suits an active lifestyle. That leaves the EcoSport. For us, it fills the broadest spectrum of buyers’ needs. Expect to see plenty of these in a city near you. 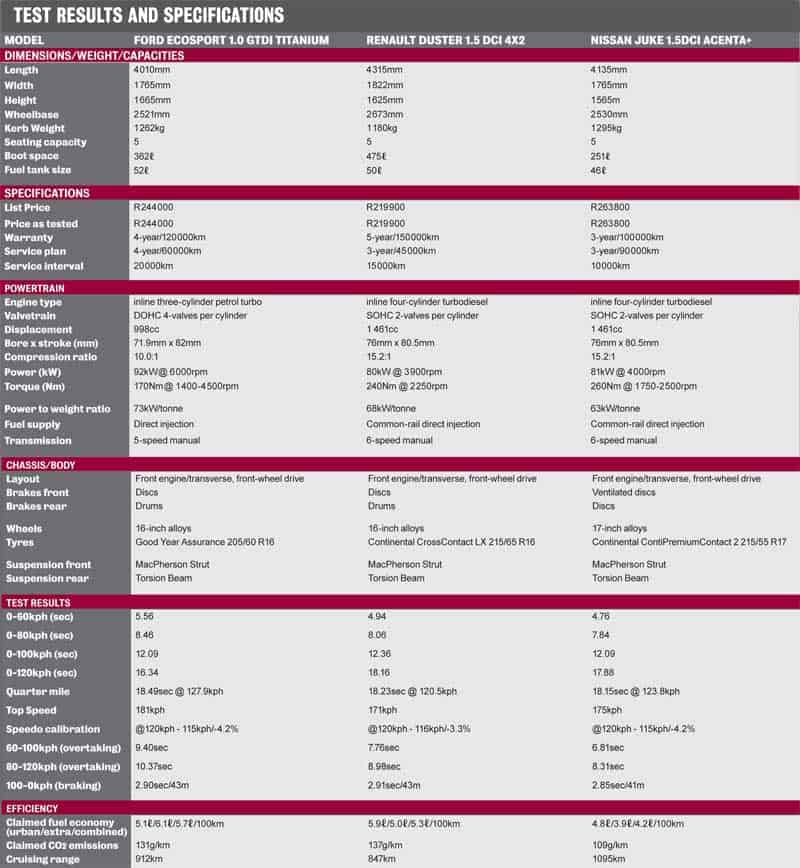