Hot hatch? Not quite. When Nissan SA launched the Uno Turbo back in 1991 (second generation, as SA never received the original chunkier version), the perky little tiddler was the only warm model on offer across the severely limited Fiat range. Cult following ensued as it became the dark horse among the established hot hatches of the era, each with their brand loyal band of boy racers. Surrounded by lethargic GLIs and RSIs, not to mention obese GTIs and GSIs, it held two aces: an anorexic 925kg kerb weight and turbo-boosted performance. On these shores turbos were still considered witchcraft on production machines at the time, unless you were looking at something like the Opel TS which sold for double the price and initially was plagued by cooling problems.

Fast forward 18 years and we have the new Grande Punto T-Jet, which on paper boasts the same 88kW output as the Uno. Thing is, it’s been unable to resist the Mr Delivery menu and has fattened up to meaty 1170kg. Yes, it’s loaded with all manner of safety kit, and yes it’s more refined in terms of fit, finish and power delivery lower down the rev range, but it also enters a far more competitive market in 2009 than the Uno did. So I’m sorry, but at this rate, Fiat won’t have similar luck this time round. 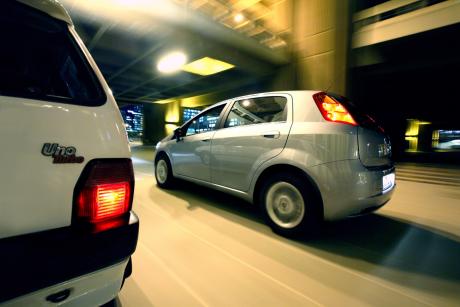 Parked alongside each other, you’ll have no doubt as to which one is cultist and which one is cutesy. The original Uno is well known for its boxy, brick-like profile, so it was never an aerodynamic marvel. This fine example, owned by Werner Janbrich, is covered in the original Polar White factory paint, and still sports the original 13 inch Abarth alloys – as denoted by the scorpion badge at its centre. It looks tough, attractive too, in an old-school ‘bruised-up boxer’ sort of way.

In stark contrast the new car is a real ‘pretty boy’. All fine if you like that sort of thing. It’s refined, stylish and noticeably Italian. That elegant rounded visage, now devoid of the five vertical stripes the Turbo wielded as its sporting emblem, instead brandishes the new scarlet ‘Fiat’ insignia. Its frontal aspect has been likened to the noses of exotic Maseratis and Aston Martins, before being grafted ‘anime’ style to the 4030mm long frame of this baby hatch. In Fiat’s defence it’s a convincing job. The sharp creases along the Punto’s otherwise smoothly sculpted flanks define its shape like the creases on a well pressed Italian suit. The result is pleasant, if lacking in visual drama. Similarly, the 15in alloy wheels tucked under the arches (16 and 17in are options), and sheathed in Continental rubber, are a far cry from the blood-and-guts Abarth items that give the Uno Turbo its purposeful stance.

Climb inside the Punto though, and you’re greeted by an interior easily on par with the most premium brands in this segment, damned near class-leading in fact. Even the fake carbon weave on the dash is one of the better attempts at faux-motorsport appeal – even if the slightly squishy nature of the polymer gives away the lie.

Kit and conveniences there are aplenty, unlike the Spartan cabin of the precedessor, though we did miss an MP3 disc player on our test unit. An auxiliary port would have gone a long way to help satiate our multimedia needs, but alas this too was absent. It’s a pity as I can think of a handful of hatches retailing for a good couple of grand less that boast these features as standard. Thankfully the cabin of the more modern car is spared the horrible multicoloured motif that blights the door cards and seats of the Uno Turbo.

In fact, none of the foibles that lent the Uno its econobox image are echoed in the Punto. Instead it’s a fusion of racy red stitching, ergonomically arranged instrumentation and quality visible materials.

As befits a modern hatch, the Punto’s major controls are light and easily modulated: no grabby clutch, no driveline play and certainly not much steering feel. Simply depress the feathery clutch, slot the slender gear lever into place and feed in revs as you feed in friction. No squeals, no fuss, the Punto charges ahead spiritedly, but at nowhere near the Uno’s pace. At 7.9 seconds the Uno’s claimed figure in the 0-100kph sprint is a full second quicker than we can manage today in the Punto, even after numerous launches. In its defence, our best attempt of 8.97secs does well to compete with similarly priced rivals.

Strangely enough, or perhaps predictably, the Punto shares its powerplant with the Bravo, though in that car’s Sport (and Dynamic) derivative it is tuned for a more zesty 110kW. Marketing rules dictate that the Punto top-liner has been pegged at 88kW, but this mill still churns out a respectable 206Nm from the useable mid-range point of 2000rpm. So none of that delectable 230Nm overboost the Bravo Sport offers, but then again, it’s not the Uno Turbo’s 161 Newtons at a thrashy 3500rpm.

It may not be enough to keep the purists happy, or away from the chip shop, so to speak, but it does seem to suit the chassis and suspension to a tee. It rides on MacPherson struts upfront, now with hydraulic telescopic dampers as opposed to the twin tube units on the Uno, and shares a rather differently damped torsion beam rear. It’s a well balanced package capable of handling the power being sent to the tarmac, and on Killarney circuit the Punto was surprisingly pointy, coupled to an understeer characteristic both predictable and controllable. But racing’s not really what this car is for, is it?

Stacked against the 18-year-old Uno turbo the Grande Punto is predictably the better car of the two – that’s if everyday practicality and a relatively rapid ride are your requirements. But when it comes down to charisma, old-school charm and that hard-edged seat-of-your-pants performance, the original Uno Turbo has it convincingly whipped.

That’s not all, because at a sticker price of R197 300 the Grande Punto shares the market with some truly impressive alternatives. I cannot help thinking that since performance is clearly not the motivating factor in considering the Punto, then why not consider an alternative that undercuts it by over R5000? The accomplished Ford Fiesta 1.6 Titanium four-door offers a very similar deal in what is arguably a prettier package boasting plenty more bells and whistles.

If however you’re a Fiat aficionado waiting for the second coming of the Uno Turbo, skip this offering and instead snap up the first Abarth-badged hatchback that reaches our shores. Chances are it will be a 500. We’ve driven them and, unlike the Grande Punto, you won’t be disappointed. Alternatively, keep your Uno Turbo and revel in its collectible status for a few more years.