‘Years from now, enthusiasts will look back at the 335i – and specifically its mighty engine – as the car that changed conventional thinking. Will the next M3 be turbocharged? Looking at the 335i, one is tempted to say something like: “I have seen the future”.’ Quote, unquote topCar December 2007.

It would be presumptuous to say ‘told you so!’ We’ll save that for when BMW finally confirms the rumours that the next M3 will have a blown engine under the bonnet.

It makes so much sense. After a year with our 335i four-door long termer, we’ll happily testify to the charms of the twin-turbo six-cylinder engine. Not only is there virtually no turbo lag, but the lighter, smaller engine means better fuel economy and less CO emissions than its bigger capacity brethren.

So the 335i, specifically the practical four-door sedan, has for us pretty much epitomised the ultimate driving machine for the family man – an incredible engine and superb handling for only R510 500.

But change is the only constant in the motoring world. Nobody can rest on their laurels. There’s a pretender to the crown and it’s yet another three litre six-cylinder turbocharged Beemer, but this one burns diesel instead of petrol. It’s the brand spanking new 330d and within hours of delivery at the topCar office it has us re-evaluating our attachment to the 335i. 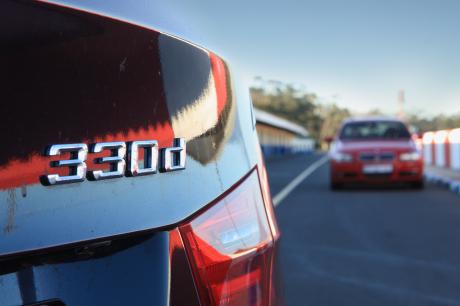 We’re standing behind the pit wall at Killarney Race Track as the 330d comes hurtling past us on the main straight at an indecent speed. Instead of the howling scream of a petrol engine we’re all addicted to hearing at the track, there’s just the steady thrum of an unstressed diesel and the swoosh of air being forced out of the way as the car muscles past.

This must be what it sounds like at Le Mans when the Audi R10 TDI’s and the Peugeot 908HDi’s waft rather than scream past your vantage point, brushing the vocal petrol competitors out of the way.

We’re busy with a little petrol vs diesel race of our own as our road test engineer Peter Henkel rolls into the pit lane, lowers his window and nods his helmeted head affirmatively. This means the 330d has impressed him as well, as we knew it would.

Yes, the new 3 Series has new bonnet creases, new L-shaped taillights, new headlamps, deeper kidneys and curvier mirrors. And yes, the new iDrive system is a hundred times better than before. It’s now so easy and intuitive even I could use it to sync my mobile phone, find songs on my iPod and change the light settings in seconds.

But BMWs are best appreciated on the road from behind the wheel, so the big news is the newly developed six cylinder diesel engine in this particular car. It’s a beauty.

That’s pretty impressive, but it’s not even close to how good it feels in the driver’s seat. Acceleration is effortless and with the six-speed Steptronic transmission doing the shifting for you, a prod of the right foot is enough to send you surging forward on a torque tsunami. If you want to change gears yourself, you can use the paddleshifts mounted on the steering wheel.

The handling is good as well. So good, in fact, that it reminded us of our trusty 335i long termer. And why wouldn’t it. It’s a 3 Series Beemer after all. Do the math. One fast 330d plus one fast 335i equals some serious track time at Killarney.

At R47 000 less than the 335i and with some seriously impressive performance claims on its spec sheet, we wanted to see how close it can really run its petrol sibling. That means the whole gamut of performance testing, as well as the ultimate decider – timed hot laps around the race track.

Peter is bang on the money with the acceleration tests, equalling the claimed times and proving that the petrol does the dash half a second faster that its diesel counterpart. Then it’s down to the real test, where the huge reserve of twist available to the 330d might just help to power it out of the corners faster than the 335i, and on to a quicker lap time. Then again, the 335i might have less Newtons, but what’s there is delivered from 1300 all the way up to 5000r/min. This is going to be good.

The format is a warm-up lap, followed by two hot laps, followed by a cool-down lap. First up is the diesel. There’s no screaming engine, no squealing tyres. The absence of fuss is remarkable as Peter hurls it around the track. It doesn’t look or sound that fast. But it is. He clocks a best time of 1.30.89.

It’s almost half a second faster than our lap time in an Audi RS4 last year and only slightly slower than our times in a BMW M3 and Mercedes-Benz C63. Different driver. Different time of the day, but still … this is a diesel, for crying out loud!

It’s clear the 335i has a job to do. It has an extra ace up its sleeve: BMW’s M Sports suspension. But will it be enough to avoid any humiliation?

As it comes howling past us on its first hot lap, one of the team behind the pit wall chirps: ‘Now that’s what an engine should sound like.’ The 335i clearly has a loyal following at topCar, and it rewards that loyalty with a best lap of 1.29.39 – not exactly trouncing the diesel but at least beating it, even if by only 1.5 seconds.

The numbers make even more sense when I take the cars around the track myself. I drive the petrol more intuitively, the throttle is easier to modulate and my gear selection more secure. If I had to choose a car for a track shootout, it would have to be the 335i.

But the diesel’s sterling track performance – sans any lowered or stiffened suspension – is boosted by its real world ease of use. It might not have the trick suspension, but that means the ride’s more comfortable. Then there’s the R47 000 price difference, and the fact it’s hard to ignore its fuel sipping and emissions credentials. Even after our morning of pedal-to-the-metal testing, it still returned average figures of 8.2ℓ per 100km on that particular tank of fuel.

The 335i might still be king on the track, but on the road, for me, the 330d now rules. The King is dead. Long live the King