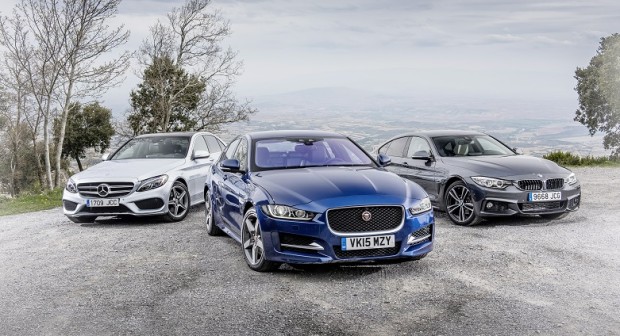 Forget the X-Type, the made-over Mondeo that was supposed to take Jaguar to 300000 units a year but struggled to sell half its predicted volumes. This time Jag is taking things seriously. But even with its arsenal of rear- (and eventually four-) wheel drive, fancy suspension, aluminium construction new engines and a new multimedia system the XE has got its work cut out, both in the showroom and up here in the mountainous Basque region of northern Spain. Mercedes new C-Class has completely shaken the sector up by refocusing on comfort and luxury. A proper junior S-Class, it’s the only car in the class to offer air-sprung suspension. And let’s not forget the 3 Series. A sales titan, it’s got every angle covered, but always with an eye on handling over luxury. For this test though, we picked its 4 Series Gran Coupe brother. Fractionally sharper in style and dynamic terms, its lift-back boot gives it a practical advantage over the 3 Series, but most of what we’ll be talking about here applies to the 3 Series too.

These are heartland compact executive sector cars. Jaguar’s challenger, available in a range of 2.0-litre turbocharged petrol, punchy 250kW 3.0 supercharged V6 from the F-Type and 2.0-litre Ingenium diesel, goes on sale in SA this September. With local pricing still to be announced, we opted for a 132kW diesel with the eight-speed auto ‘box and racey-looking R-Sport trim for this three-way battle. Its opposite number from Mercedes is the R525500 125kW C220 BlueTEC in AMG Line trim, while BMW has fielded the 420d M Sport, which delivers 135kW for R578800 ‘ a steep R64400 more than you’d pay for the mechanically equivalent, if more spartan 3 Series saloon.

The C-Class really epitomises premium but isn’t universally handsome. The rear looks a little droopy and the profile, with the interior shifted so far backwards it makes a Bugatti Royale look like a 1990s cab-forward Chrysler concept car, is plain odd. But the three-quarter angles are gorgeous and this car’s diamond silver paint highlights every single nuance of the design, the coving in the doors and contours of the AMG Line bumpers with their faux mesh inserts, and entirely fake twin tailpipes (the real pipe is a limp, downturned single skulking under the boot floor).