Without a doubt the best looking contender in this category. Blessed with a rugged and purposeful physique it’s easy to see why so many people are buying the Land Rover Discovery 4. More of a status symbol than anyt­hing else, the Disco is comfortable on any surface thanks to the state-of-the-art Terrain Response system, which can be tailored by the driver for maximum efficiency. Crucial to the Disco’s allure is the capacious seven-seat interior, which features high-quality materials and a premium infotainment touch screen display with all-round camera monitoring system. The 3.0-litre V6 turbodiesel power plant is a gem. Equipped with 180kW and an evenly spread torque curve, the Disco cruises well on the long road and makes easy pickings of towing a heavy caravan or trailer. Mated to an impressive six-speed automatic transmission, the 3.0-litre V6 will go from nought to 100kph in 9.6 seconds on its way to a top speed of 180kph. Three trim levels comprise the line-up: S, SE and HSE, of which a powerful but thirsty 5.0-litre V8 is also an option. Reliability has always been a sore point for Land Rover owners – thankfully, the brand has made significant progress of late scoring well in the latest JD Power Customer Satisfaction Index survey.

Toyota Fortuner has been South Africa’s best-selling SUV for several years. Known for its impeccable off-roading abilities and pragmatic functionality, the face-lifted Fortuner’s all-round appeal continues to reel in new buyers. A newly acquired 2.5-litre D-4D turbodiesel has spiced up the range to go with the thirsty 4.0-litre V6 and frugal 3.0 D-4D turbodiesel. 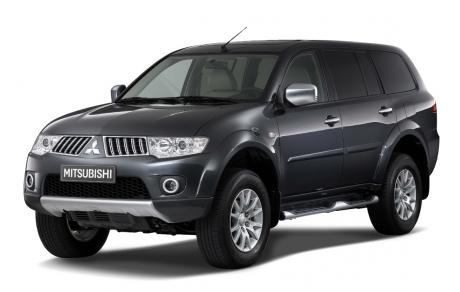 A worthy alternative to the ubiquitous Toyota Fortuner, the Pajero Sport fits between the Outlander and regular Pajero in the model line-up. Although it shares a great deal of its structural components with the Triton, it’s by far the better looking of the two offering a plush interior peppered with an extensive list of standard equipment. It’s pretty capable off road, too.

The FJ Cruiser has made it trendy to drive a Toyota again. Inspired by the FJ140 Series from the ‘60s, the FJ Cruiser blends a retro exterior with a modern and utilitarian cabin. The 4.0-litre V6 mill – good for 200kW and 380Nm – is quite willing, but is let down by horrendous fuel consumption. Toyota needs to ditch the archaic lever-operated transfer case for an on-the-fly change over system.