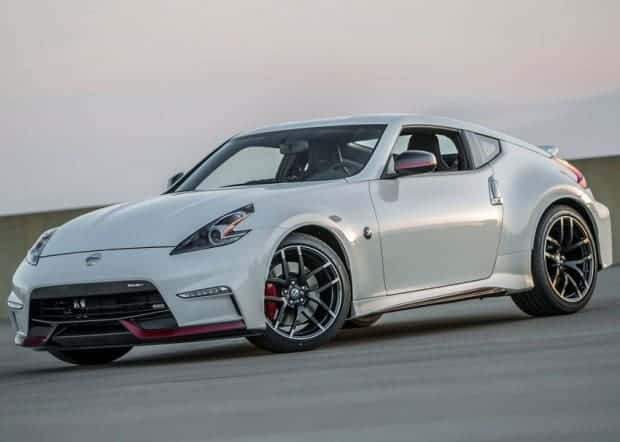 Nissan didn’t go to the Geneva or New York Motor Show to reveal its latest sports car; instead it decided to launch the 370Z Nismo at a ‘ZDayZ’ event in North Carolina in the US. Clearly Nissan recognise the 370Z Nismo is an enthusiasts car (particularly in the Z mad US) and the company wanted to let true Z fans see the Nismo iteration first.

Nissan recently confirmed it was planning special Nismo (Nissan Motorsport) editions of most cars in the range: the Juke, 370Z, Leaf, Micra, Sentra and GT-R, of course. However, unlike some of the more mental Nismo special editions from the past, these Nismos are more aesthetic model leaders rather than exclusive high-performance offerings.

The Nissan 370Z already had Japanese, European and American Nismo variants but the red-detailed aggression; similar to what you’ll find on the GT-R Nismo, is clearly something Nismo want to build on with this Z’s new front bumper, wider grille, LED DLRs and prominent chin spoiler. Nismo badging persists throughout the car and a unique rear spoiler works in combination with the front spoiler for added downforce.

A new style of 19-inch forged alloy rims from Rays look great too, as do the Recaro bucket seats on the inside. Power is unchanged from the 3.7-litre V6 and drive is channelled through either a seven-speed auto or the brilliant six-speed ‘SynchroRev Match’ manual with the Z’s viscous limited-slip differential attempting to keep things tidy at the rear.

The Nissan 370Z Nismo goes on sale in the US immediately , with an expected price jump up from the base 370Z of a direct conversion equivalent close to R100 000. Can we expect to see a Nissan 370Z Nismo in South Africa? Sadly not, but if you’re a Z enthusiast you could probably do similar modifications to a base Nissan 370Z for cheaper and just find a couple of Nismo badges. We know you want to.