The New Year is all about new beginnings and what better way to shake off those cobwebs after your holiday break than with the February 2015 issue of TopCar. It’s on sale now!

We gather nine of the best drivers cars in the world for a giant sports car test. Two days of arduous fun, uhmâ¦ testing should sort the men from the boys.

We take the new Land Rover Discovery Sport to the top of a glacier in Iceland to see if it’s as faithful a companion as your family Labrador.

We relive all the good, bad and ugly moments for 2014 in a distilled version of a year in the life of TopCar in our 11-page Greatest Hits special.

2014 was the year of hybrid hypercars, and now the Italian marque has dreamt up a 735kW riposte to the McLaren P1 GTR with the FXX K. Weâre guessing it’ll be FXX King fast. 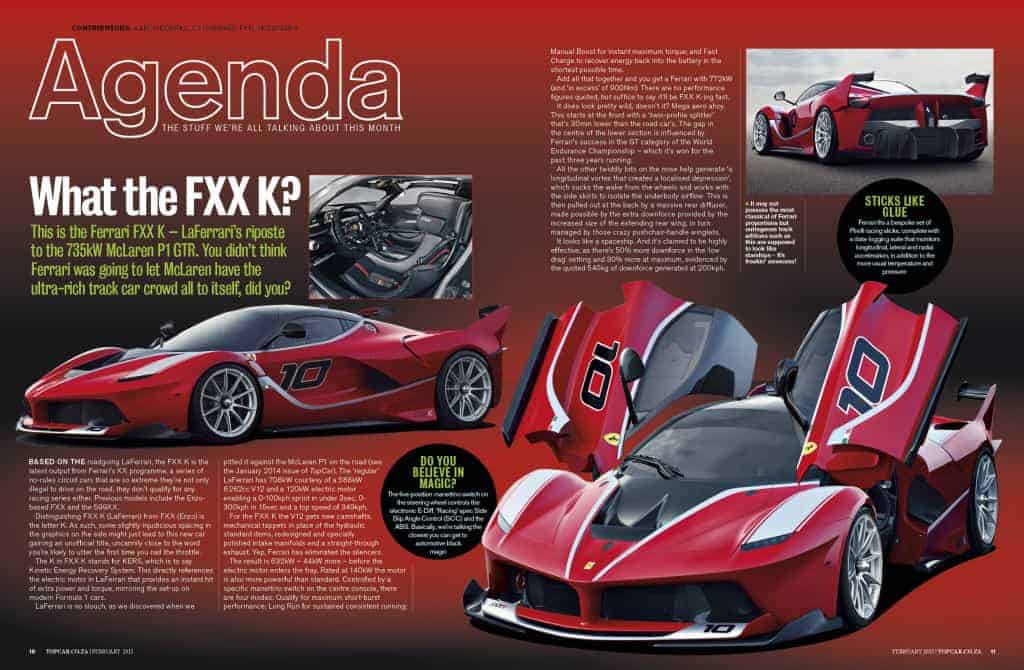 A New Year deserves some fresh first drives and we get behind the wheel of the svelte Maserati Ghibli, and perhaps one of the most exciting hot hatches ever made: the Audi S1. In addition we stretch the legs of the new Kia Soul crossover. We have our first go in the Hilux-baiting GWM Steed 6, and we try out the newest small offering from Mazda – the compact Mazda2.

If you find yourself needing to be a bit thrifty after an expensive festive season, this test is just for you. We pit two budget sedans against each other to see which is worthy of your hard-earned Rand in 2015.

On the road test front, we put the new Mazda3 Sedan through its paces, and ask the question: can it reclaim the ground it lost while the company went under the radar?

We gather a BMW M4, RenaultSport Megane Trophy R, Jaguar F-Type Coupe R, BMW i8, McLaren 650S Spider, Porsche Cayman GTS, Ferrari 458 Speciale, Alfa Romeo 4C and Volkswagen Golf R and see which one tickles our fancy in an 18-page special… You might be surprised at the outcome.

The Discovery Sport replaces the Freelanderand we take it on an adventure drive to the top of a glacier in Iceland to test its best Bear Grylls impersonation.

We start a bidding war as we give you the low-down on buying a repossessed or crash-damaged car at auction. We drive a crazy Mustang with a Corvette engine in Detroit, and we have an exclusive interview with Niki Lauda on Mercedes emphatic F1 triumph.