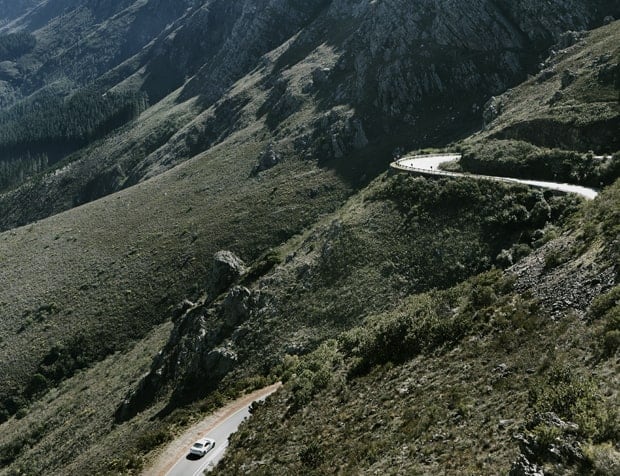 BETWEEN THE PICTURESQUE town of Franschhoek and Villiersdorp exists an epic driving adventure should you choose it. Actually it’s more like three epic drives, the initial section snaking up long tree-lined Tarmac, illuminated by the odd ray of sunshine that manages to bursts through the foliage. Negotiate a hairpin at the start, then tuck into a series of gradual lefts and rights until you close in on the summit where the cliff-side tree line is replaced by a view of the scenic Franschhoek valley. At the second hairpin, more of a corkscrew really, the next section begins. Here you’re exposed to the natural elements which is fine if it’s sunny, scary when it’s wet, as a high-speed downhill ensues with the sort of intensity and technical work that terrifies luge runners. You’ll fly through a third hairpin and then after a few more esses the road straightens out lightly for the ultimate section, sweeping corners and straights along the Theewaterskloof Dam. Majestic.

Downs: All good things come to an end

A bit of a tease this one. Helshoogte Pass is scenic and located in a great part of the Cape. The road surface is ideal but the high camber has the potential to push you to the outside amid a raucous rubber soundtrack. A slew of speed cameras and an 80kph limit ensure you’ll never go fast enough. The best reason to whip through Helshoogte remains the fact that it leads to the brilliant Franschhoek Pass but it’s not without its thrills.

Let me in form you of a petrolhead conundrum. We like winding mountain passes, but we also like blasting through tunnels such as the Huguenot on the N1. The Du Toitskloof pass is the alternative route out of Cape Town and features a tiny tunnel of its own, so if you’re after a bit of both then you should consider turning left to enjoy this glorious mix of hairpins and chicanes.

Ups: Great visibility and a tunnel to amplify a flat-four boxer

Downs: Too many trucks, and then there were baboons

IF ROOI ELS road was a piece of music it would be an emotionally-charged orchestral piece like Flight of the Bumblebee or O Fortuna, featuring glorious crescendos and deep, raspy air instruments and a bassy rumble underneath it all. Remixed by Skrillex. Then detonated with TNT. In a minefield. Just picture it; on your right a glistening ocean, rendered as a crystalline blur. Your left is a cliff-face that dances left and right, the Tarmac its dance partner. You’re diving and climbing, carving through chicanes turning them into gentle straights as the prodigious visibility allows you to exploit the full width of the road. It’s gorgeous. Forgive the un-masculine description but it really is the Scarlett Johansson of coastal road, golden and glowing, overflowing with curves. You can go quickly here, you can finesse your car’s handling limits too. Don’t be discouraged at the occasional poke in your ribs though, that’s just the road taunting you with a ‘nudge, nudge, wink, wink’ clue that it has so much left to give.

Downs: It’s not attached to the Franschhoek Pass

I’m almost hesitant to share this slice of motoring Nirvana with the world, it is that good. Just as you leave Gordons Bay, en route to Rooi Els no doubt, you’ll spot an unassuming intersection that leads to the Steenbras Dam. Take it, and you’ll encounter this incognito hill climb stage complete with a brick-surfaced hairpin and spaghetti-like asphalt with magnificent and ocean and bay views.

Downs: Now everyone knows about it