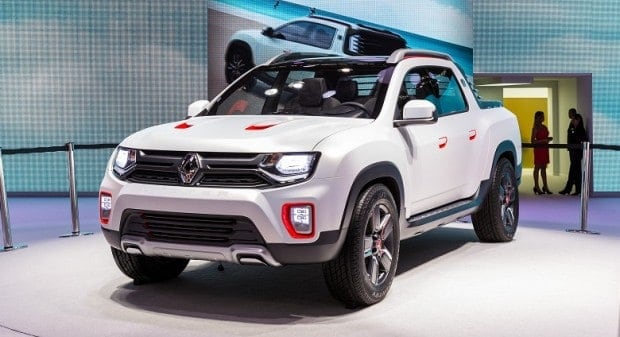 Keep your shirts on it’s only a design concept for now, sketched by Renault’s design centre in Latin America, but Renault has at least shown some intent by making this concept bakkie out of a Duster 4×4 SUV. What a great idea, why didn’t anyone else think of that? Well, someone did actually Dacia themselves. A month ago Dacia actually introduced a pickup variant of the Duster, designed by petrochemical company OMV Petrom, exclusively for the Romanian market.

Built by coachbuilder Romturingia, only a few hundred will be built, sporting near-identical proportions to the Duster SUV, but with a tall-sided flat load bed and a tailgate replacing the second row of seats and boot. Rather noticeably, however, the spare tyre takes up some load space mounted to one side of the bed so perhaps the R&D budget was a bit limited.

Little else was revealed about the single-cab Duster bakkie at the time but one assumes Renault’s 1.5-litre dCi and selectable all-wheel drive transmission will underpin it mechanically and an identical Duster interior does service on the inside. Dacia didn’t mention if the Duster pickup would eventually be added to their production car line-up either, but surely in light of this new Oroch concept, we can assume some intent.

The Renault design study was unveiled at the Sao Paulo Motor Show recently and it’s meant to gauge public opinion. Much like us, the South American’s can’t get enough of sub-one-tonne double-cab pickups, so we image a rousing response from show goers. From the images you’ll see the front styling features Renault’s updated corporate grille, the interior some typically overt concept car details, and it has a high stance, roof rails, dark 18-inch wheels and dark plastic mouldings to protect body work while off-roading.

Renault say, ‘The show car explores the world of pickups, a segment we’re absent from at the moment but which totals around 900 000 vehicles sold in South America each year.’ Dacia has enjoyed huge success since coming on board with Renault and the brand’s three-million sales worldwide since the launch of the Logan in 2004 are testament to that.