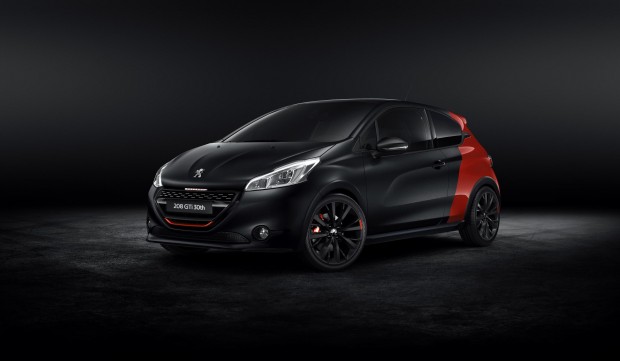 Peugeot’s taking a special anniversary edition of its 208 GTi to the Goodwood Festival of Speed for a properly roaring unveiling.

Celebrating 30 years after the release of the 205 GTi, the 208 GTi 30th anniversary Limited Edition has made its first appearance in the Supercar and ‘First Glimpse’ glass on the Hill, before moving to a static display for the remainder of the weekend. October’s Paris motor show will see the hot hatch’s next big public outing.

Until then, we can reveal that the 208 GTi 30th will feature an uprated version of the current 1.6-litre turbocharged petrol engine delivering 155kW (or 208hp, referencing the hatch’s name) and 300Nm. Peugeot notes a 0-100kph time of 6.5 seconds; Michelin Pilot Super Sports take care of grip and road-holding duties, while disc brakes and Brembo four-pots take care of the stopping.

Its Torsen differential’s been lifted from the RCZ R, while stability and traction control systems have been recalibrated to be less intrusive when pushing on.

More exclusive touches have been added to the anniversary model, including suspension lowered by 10mm; the front and rear tracks widened by 22mm and 16mm, respectively; and larger diameter 18in wheels for the with matte black rims. The matte black treatment’s also been applied to the grille surround and door mirror housings, while Peugeot Sport-labelled brake calipers show through the front wheel spokes. Round twin chrome tail pipes suitably convey the 30th’s sporting intent when seen from behind.

The standout visual feature is the ‘coupe franche’ paint finish, where the hatch’s rear and front is separated by a two paint colours. For prospective owners, the more conservative among you (if there are any), might be relieved to know the paint finish is optional.