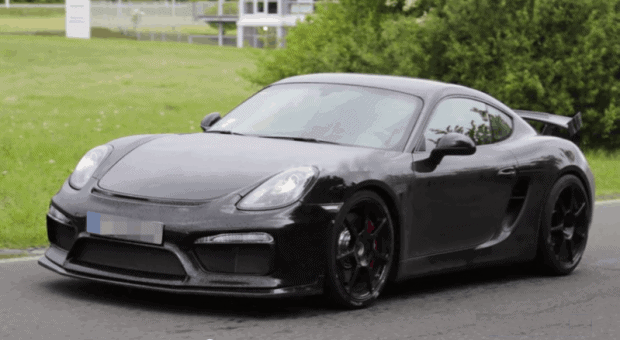 A potential new king of Porsche performance cars has been spotted testing its mettle at the infamous Nurburgring. Is the new mid-engined, be-winged Porsche Cayman GT4 poised to challenge the authority of the Porsche 911?

The Cayman GT4 will mark a major change for the Cayman sports car in that it’ll become Porsche’s first factory-finished turbocharged Cayman in the models eight-year history and the first road-going Porsche to employ the GT4 badge.

The forced-induction Cayman is bound to raise a few eyebrows with enthusiasts as it forgoes the celebrated naturally aspirated engine, but reports suggest the new 3.8-litre twin-turbo flat-six will be tuned to develop a heady 335kW.

An enormous track-spec rear-end spoiler sits on the Cayman’s bootlid to aid the rear of the car with downforce at speed, while the front-end spoiler is the most aggressive yet seen on a Cayman. The visible changes only scratch the surface of the upgrades going on under the skin to keep the GT4 on the road.

Massive additional cooling vents channel more air to the flat-six, as well as bigger brakes which are visible through the new lightweight, five spoke alloy wheels. A beefy rollcage has also been fitted and there’s a functional diffuser wrapped around the centre-exit exhaust pipes.

Whilst the GT4 is expected to be the most extreme Cayman yet, will it trespass a bit too deeply into 911 territory? The clue is in the name, GT4. This Cayman is destined to become hardcore, but different in character to its older sibling. We can’t wait to test that for ourselves.