Peugeot is flirting with the idea of a Supercar again, this Onyx being the latest concept to rise from the marque. The concept will be on display at the 2012 Paris motor show along with the Onyx Concept bike and Onyx Concept scooter.

The idea behind Onyx is to explore new ‘raw’ materials to enhance overall efficiency for cars in the future. For a start the wings and doors are made of copper sheet whilst the rest of the panels resort to old-fashioned carbonfibre. The windows and roof are made from PMMA (PolyMethAcrylate) ensuring a stronger cocoon the glass. 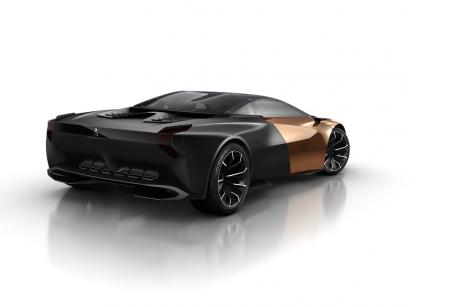 Bolted into the middle-rear of the Onyx is a 3.7-litre V8 turbodiesel transferring 450kW to the rear wheels via a six-speed sequential gearbox. The Onyx is said to weigh only 1100kg. Included in the efficient package is Peugeot’s Hybrid4 tech that recovers kinetic energy and stores it for use on acceleration where it delivers an extra 60kW.

The interior is a one-piece arrangement with no stitching or visible joins. Some of the strange materials inside the cabin include a felt steering wheel, boiled wool for thermal insulation and ‘newspaper wood’ for the dashboard.

We’ll be sure to get more details on the car after its release in Paris at the end of September 2012.