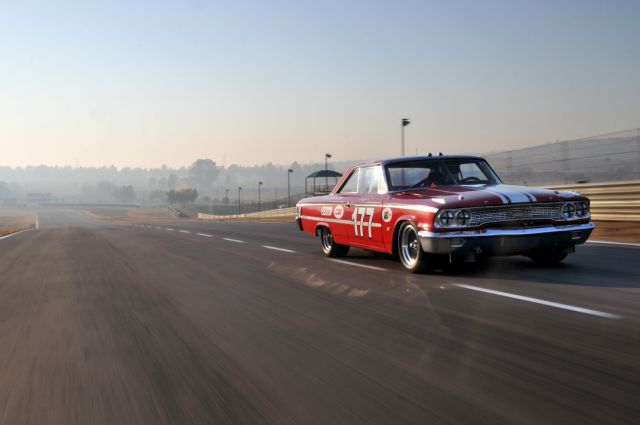 I’m sitting in the seat sometimes occupied by Sarel van der Merwe and – in spirit anyway – another great of South African motorsport, Bob Olthoff.And boy, do I feel out of my depth. It prompts the question: just how does one drive this thing without making a complete arse of oneself? The ‘thing’ in question is a 1963 Ford Galaxie, driven to victory in the 1965 SA Production Car championship by Olthoff and now campaigned by Van der Merwe and others in Historic Racing. Driving it is a bit like trying to waltz with a bad-tempered hippo on ice skates. It weighs almost 1 700kg, puts out 500-plus horsepower (that’s more than 373kW) and feels mostly out of control. I don’t think I’ve ever felt so insecure behind the wheel of a motorcar.

Fortunately, the car I’m driving is not the actual Galaxie lightweight built in the USA by good ol’ Nascar boys Holman and Moody and then campaigned by the famous Willment outfit in the UK (Olthoff and the likes of Jack Sears forming part of the driver line-up) before it came to South Africa in 1964 for the Nine Hour. Olthoff stayed on and so did Ford’s behemoth.

If it was the actual car, I’m sure that its owner, Peter du Toit (also the driving force behind the Zwartkops Raceway around which I’m slithering), would not have agreed to let me loose in it. But this is a rare car, being a Galaxie slantback rescued from a smallholding outside Pretoria some four years

ago. It was originally brought to the country as a back-up in case the actual Olthoff racer was damaged enough to require a new body. Du Toit paid R1 500 for it, not including the chickens which had taken up residence inside its spacious shell …

It underwent painstaking recreation to become a lookalike of the Willment machine and since its debut at the end of 2006 it has thrilled race crowds around the country. It is impossible to miss it out on the tarmac. For starters the wheelbase is almost 2.9 metres, but the sheetmetal extends well beyond the axles both front and rear – none of this namby-pamby wheel-at-each-corner stuff for real racing drivers. The bootlid looks like the deck of an aircraft carrier and is flanked by those huge circular tail lights. It’s a detail echoed in the round fuel and temp gauges which book-end the elongated speedometer. A glance underneath the rear bumper reveals leaf springs that seem to go on forever and a pair of huge telescopic shock absorbers. In the middle of the axle sits a differential housing the size of a beach ball, inside which is a Detroit Locker limited-slip unit.

The original Galaxie slantback owes its existence to Nascar racing in the States and the car did well on the superspeedways. In roadgoing form the car was equipped with a 7.0-litre pushrod motor with either 410 horses (306kW) or, when equipped with two four-barrel carbs, 425. That’s roughly 317kW, so while the specific output is fairly unimpressive, it’s still a nice big number. And of course there’s enough torque to push mountains around.

While Du Toit has a 7.0-litre motor from a four-door donor car acquired for bits and pieces, its a rare and expensive piece of iron and has been set aside for a 460 cube ‘crate’ motor, purchased complete Stateside. This motor has shown 520 horses (397kW) on a dynamometer and is probably more docile in nature than the 427, but it doesn’t feel it. As I discover it seems to light up the back tyres – cross-ply Hoosier semi-slicks – at the faintest provocation and also without a hint that it is about to happen. In fact, the tyres don’t seem to give much away and while there’s plenty of grip in extremis, not much in the way of information comes up the steering column and into the rim of the oversized wheel.

The steering isn’t especially heavy though and you find yourself sawing away at the wheel quite merrily, while the brakes respond well to a hefty push on the latticed Tilton pedal. Once again they aren’t big on feedback and it is relatively easy to lock up the fronts – all accompanied by an unpleasant juddering as the wheels start to hop up and down. Of more concern is the alarming weaving which takes place if your treatment of the middle pedal isn’t progressive enough.

It’s clear from the get-go that this isn’t going to be one of those cars which I can suss out in half-a-dozen laps and then drive with reasonable confidence at eight-and-a-half tenths. Fortunately, while he hasn’t driven the Galaxie before, there is a driver of suitable ability on hand: Dawie Olivier. Something of a late bloomer in motorsport terms, the bearded track ace is more usually seen behind the wheel of a Subaru Impreza STI in production car racing, where he’s been known to cause the occasional upset and regularly gets to show off his exquisite car control. Zwartkops is his local track

and he has at least driven some of the other heavy machinery in the Du Toit stable, so he’s well qualified. I’m not sure whether to be pleased or concerned when, after his stint behind the wheel, he confesses to being mildly perplexed by the car.

But I slide in, buckle up, and head out. After my session – which included a low-speed spin on what was going be my ‘hot’ (read lukewarm) lap – he gets back into the racing seat, clips up the harness and rumbles down the pitlane, his determination apparent in the body language even as he disappears from view. His brief is to also generate some numbers via our VBox datalogger, so we can see exactly what the car does. The determination manifests itself is some lurid sideways moments as he powers onto the pit straight each time, the end result being a 1 minute 17.3 second lap. It’s about two seconds off the car’s best at this track and not bad for a guy who has done all of 10 laps in the car, and those on worn tyres.

I have another go, this time using the opportunity to absorb the noises and sensations, and marvel at not only how difficult it is to drive a car like this anywhere near the limit, but also at the fact the real car had drums all round, unlike the clone which gets vented discs, aided by six-pot Wilwood callipers at the business end. I don’t go any faster in my second stint, but then the day is getting warmer and the tyres are not just tired, but pretty much exhausted. That’s my excuse and I’m sticking to it.

‘It does almost everything wrong but it is a seriously fun car to drive,’ commented Sarel van der Merwe, his grin almost travelling down the telephone line when we called him for what we knew would be a good quote. ‘It makes you realise just how hard the old guys had to work – a lot of the modern stuff has taken the driver input away to an extent. It really is a car you have to manhandle …’

Judging from my lap times I clearly didn’t manhandle it enough, but more so than ever before with someone else’s racecar, it was a relief to trundle back into the pits in one piece. I stop and savour the deep burble from within the Galaxie’s soul – a sensory experience I now share with the likes of Supervan, Olivier, and the Du Toit lads, Mark and Jonathan – and also by extension with Bob Olthoff. It was a privilege indeed.