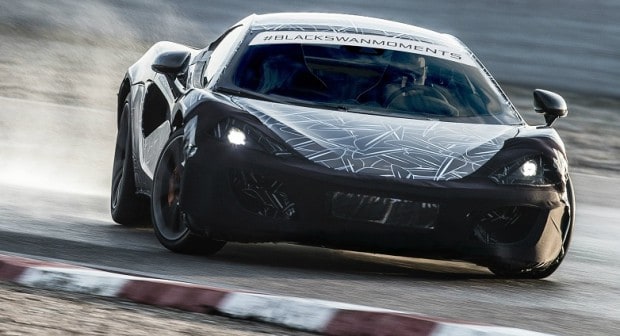 Here is the latest official ‘teaser’ photo of the new McLaren P13, aka the Sports Series. It’s the junior sports car in the fledgling McLaren line-up, due to be launched in 2015. Earlier announcements have revealed McLaren’s 911 with the doors up, confirming it will have the swan doors made famous on the 650S and P1.

The V8 will be branded as part of a new Sports Series, Woking has announced. The word ‘series’ confirms the new car will be one of a range of P13 bodystyles. Expect a McLaren P13 coupe first, followed by a spider and a lightweight GTS. Woking aims to be producing 4000 cars a year (if everything goes according to Ron Dennis’s masterplan).

To date, McLaren has started drip-feeding the Sports Series announcement, but what we know about the new McLaren range is It will use the same carbonfibre MonoCell as the bigger 650S family – and essentially the same 3.8-litre V8, although detuned for its more lowly status.

This is more of a daily driver, and McLaren has consequently made the sills slimmer to ease access, the cabin is roomier and there’s more luggage space too. Remember this car is targeting the Porsche 911 Turbo, so we are expecting prices to stretch into the R2-million range.

And with a rumoured 500bhp target for the twin-turbo V8, could the McLaren 500S name be on the cards? We wouldn’t bet against it.