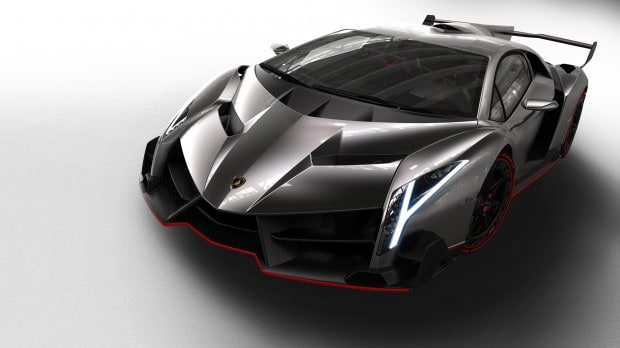 Lamborghini shows its exclusive Veneno ‘racing prototype and road-going super sports car’ at the Geneva show. Only three units of the car will be built and sold for a price of three million euros – and all three units have already been sold.

According to Lamborghini, this car’s design is focused solely on optimum aerodynamics and cornering stability, although it is homologated for road use.

Veneno uses Lamborghini’s familiar 6.5-litre V12 with a maximum output of 552kW. It accelerated from 0 – 100kph in 2.8 seconds and has a frighteningly-quick top speed of 355kph. The seven-speed ISR automated manual transmission has five driving modes. Veneno is fitted with permanent all-wheel drive as well as a racing chassis with pushrod suspension and horizontal spring and damper units.

Furthermore, the Veneno showcases Lamborghini’s work with carbon-fibre materials – the chassis is produced as a CFPR monocoque, the body is fashioned from carbon-fibre as are a number of cabin features. The extensive use of carbon-fibre also benefits Veneno on the scales; it has a dry weight of just 1450kg and is, Lamborghini says, 125kg lighter than its Aventador sibling.

As for the name, Veneno is in keeping with the Lamborghini tradition of naming its cars after fighting bulls. Veneno became popular in 1914 when he gored a famous torero José Sánchez Rodríguez in an Andalusian arena.

Lamborghini’s Veneno makes its first public appearance at the 2013 Geneva motor show. While the vehicle on show is number zero, the test unit, three Venenos will be produced throughout 2013 and delivered to their owners.