Put a kid in a Sweets from Heaven shop and you’ll get some idea of what things are like for today’s SUV buyer. So many choices it’s hard to know which way to turn. Go bigger, go smaller; petrol or diesel; tar bias or proper off-roader; German or Brit or Japan or Korean. That’s before we mention price, which starts with something like the R200k entry Daihatsu Terios and heads rapidly north.

Talk diesel auto SUV, below R430 000, and the competitive set is anything from a diesel BMW X1 to a Fortuner (if only Toyota offered a diesel auto). Depending on what you value, you could trade up to an Audi Q5 2.0 TDI, across to a Nissan X-Trail dCi A/T or similarly equipped Renault Koleos. You might look at the Land Rover Freelander 2.2 TDI, the Tiguan 2.0 TDI Track & Field with Tiptronic, or get more serious and see if the Ford Everest TDCI 4×4 A/T is going to do the trick.

So the playing fields are wide open for these two 2.2-litre diesel auto softroaders. One all new, the other a facelift; one with five seats, the other with seven. One from Korea, one from Japan (and built in the UK). Same same then, but very different.

Depending on what you want, the Sorento could either be a major surprise or a big disappointment. I’ll opt for the former, because while the latest iteration may have lost its ladder frame chassis, solid rear axle and low range, it has gained acres of style on the road to becoming a fashion accessory and lifestyle wagon. Leaving the heavy offroading to the Toyotas and Land Rovers of this world, Kia looked carefully at the owner profile and decided on a new set of talents.

Blame Peter Schreyer, ex Audi and Volkswagen, and his team of experts, for all this nonsense. Superb car, highly desirable, tactile in all the right places, with nice to hold and touch items ranging from the key fob (so Audi-like it’s scary) to the grippy steering wheel with its big stitching and buffalo hide texture.

The sheet metal is also so much better: square, bluff, handsome. The keynote bottle-opener grille is writ large up front, and bold, strong, squared-off surfaces abound. The proportions are pleasingly big and macho. The rear light jewellery is red-dot busy, the headlights swept back in a snarl. The lower panels and wheelarches are purposefully defined by black cladding. It’s a looker.

Inside is the big change. Surprise and delight abound. Yes, there’s lots of plastic, but the shapes are pleasing, the access easy, ergonomics excellent. It feels distinctly familiar and instantly comfortable, from the three-spoke wheel to the deep-set triple instrument cluster. You can’t help but enjoy the reversing camera inset in the rear-view mirror, or the twin sunroofs, of which one opens, or indeed the luscious ambient strip-club red light which bathes all the door controls and footwells at night. The seats are comfortable, with electric controls for the driver, and while my seat began creaking during busy cornering manoeuvres, this was only a mild disappointment. There is plenty of rear head- and legroom; the rear seats adjust to a semi-recline position, and also split and fold forward to increase the load area. The third row rear seats take up most of the massive boot area when up, but vastly increase people carrying utility when required. The light, quite direct steering and two-pedal control, combined with the high seating position, make this biggish car shrink around even the smallest drivers in the best softroader tradition. There you have the makings of desire.

The diesel is a delight: responsive and quiet for the most part, it never feels out of breath, though is slightly thrashy at higher revolutions. It hustles the nearly two-tonne Kia along with urgency when required, staying in the background as most owners will prefer. Its 147kW/435Nm figures are class-leading. Coupled with the smooth and quick-changing six-speed auto, it delivers a claimed 7.6 litres per 100km and a CO2 emissions count of 194g/km. The technology has clearly come far, refinement even further.

Driving the Sorento reveals some wallow, the soft springs trading some pitch for ride comfort which is most obvious on rutted off-tar roads at speed, where there is also a fair amount of surface intrusion to the cabin – despite NVH levels below the predecessor due to a 40% stiffer body shell. It’s very well composed on tar, with levels of lateral grip belying the size of the vehicle.

Gung-ho excursions are probably off the agenda. Sorento carries over the previous MacPherson struts and multi-link rear suspension sans solid axle, but as caution I quote the owner’s manual: ‘These vehicles are not designed for challenging off-road use. Occasional off-road use such as established unpaved roads and trails are OK.’ (Section 5, p23). There’s a rotary dial to play with however, when front-drive only is not enough. In 4WD Auto mode, drive is automatically supplied to the rear wheels when traction is lost. In 4WD Lock, for going up and down steep grades or muddy/sandy conditions, the system ‘begins to deactivate’ above 30kph and above 40kph shifts to 4WD Auto mode, apportioning drive as required, but reverts back to Lock mode as speed moves below the 30kph threshold. Bottom line, there’s a bit of driveline shunting back and forth in sustained dirt driving and in sand where momentum is essential to keep the plot afloat. Pity.

I should mention that four things went awry during our two-week test period. The remote boot lock became inoperative and had to be opened from inside manually by removing a small cover and pulling the lever. A pain when fully loaded. The reversing camera cleverly inset in the rear-view mirror stopped working. The parcel shelf, when moved into place to cover the boot area, sounded like a nest of squirrels out back, exposing movement in the car’s structure, and a rattle from the exhaust or rear suspension, especially under load, became evident when on the move. In Kia’s defence, the car was an early production right-hooker, driven straight off the boat, which perhaps did not benefit from a thorough shake-down and PDI (some of the seatbelts and the steering column stalk were still wrapped in plastic).

This does not detract from the fact the Sorento is a highly desirable vehicle. For space it competes most directly with the Chev Captiva (also built in Korea) yet manages to look better, in addition to offering a powerful and efficient diesel powerplant, coupled to a far better judged auto box. 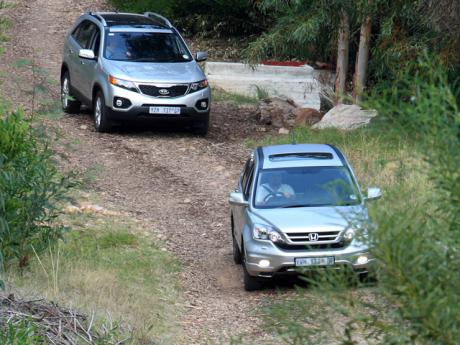 So where does the more compact Honda score? The CR-V has been a great seller for the company, particularly in the US. It’s a conservative vehicle, aimed more at the older generation who want to travel on occasion on dirt roads, but for the most part like the extra loading space. It’s epically refined, well crafted, beautifully engineered and just that bit better put together than the Kia.

For the 2010 mid-life boost, just before the expected 2013 grand makeover, the grille and airdam were changed, the tail lights revised and the bumpers mercifully altered. The interior has better seats with wider armrests, and indeed they’re of finer quality than the Sorento’s with no sign of wobbly surfaces. Inside, aficionados will notice useful changes to the audio control buttons, and a refreshing cool blue backlighting theme.

The materials are excellent, the same thoughtful CR-V essentials all there, now with extra polish and a bit more homogenous application. Micro controls are superb, bevelled, satisfying to use. The steering is responsive, alive, and the wheel itself feels just-so. The Civic-based underpinnings are arguably a little more secure, more rattle-free and better damped than on the Sorento. It’s a smaller car, the same model further refined, so it has the jump of not starting again virtually from scratch.

Off tar the CR-V handles superbly, with the minimum of rattles, due no doubt to stiff body shell containing 58% high tensile steel, which all helps to maximise control. While not boasting a lockable four-wheel drive system, a hydraulic pump and quick-acting mechanical cam arrangement enables drive to the rear wheels when they need it – no driver interference required. On the tar it exhibits some body roll, the fault of extra compliance, and it prefers to cruise effortlessly rather than hustle. But turn-in is precise, grip levels good and the driving experience notably fuss-free.

The five-speed auto is a lockup torque converter type, with a smoother operation than in the Accord which uses the same frugal but torquey diesel engine. It does without paddles, preferring a simple ‘D3’ button on the shifter stalk which slows the car on downhills and holds in third gear when towing or overtaking.

The exterior still won’t win that many more friends or influence the younger gen. The front overbite has been fixed, and the D9 Caterpillar bucket scoop look is gone from underneath. The side cladding is body coloured instead of the previous sombre black and the rear bumper has also been sharpened up. As another tester remarked, ‘it looks a lot less like a turtle with overbite, even if the side profile is unchanged’. Hmmm. Sadly the middle-age spread is still there in the general shape which plumps out towards the lower edges, and once you notice it, the rounded profile continues to inspire those mutant ninja images. It may be the best looking CR-V yet, but that’s not saying a heck of a lot.

Climb inside, drive and you understand. It’s a super car in terms of engineering and refinement. But it’s pricey. Maybe you will recoup that money in slow depreciation and trouble-free motoring, plus the hard-to-define everyday pleasure that comes from piloting a superbly crafted auto.

The Honda is the scalpel to the Kia’s sword. Ultra refined, better finished in every area, and now with a potent and quiet diesel engine, offering remarkably similar fuel economy and low emissions (7.5ℓ/100km and 197g/km, against 7.4 and 194).

But take the Korean’s pace and space credentials. Seven seats. Now that’s one for young families with Catholic tastes. It’s fantastic to look at, with almost the street presence of, say, a BMW X5, plus some of the bluff appeal of a proper off-roader like a Land Cruiser – yet it sips fuel.

The two are similar in off-road capability and on-tar manners. They trade serious off-road ability for what most users want: space and fuel economy for the urban round and the occasionally dirt road foray. They both prefer to run on 50ppm ultra-low sulphur diesel, which is becoming more widely available closer to the main centres but is not yet supported through Africa. They both carry five-star NCAP ratings, so have the safety credentials and all the warning bells.

The big difference is in the price. At R435 400 the Honda, though superbly specced, struggles to make its quality point of difference when the Kia offers such value. R400 000 for the top-line 4WD auto seven-seater Sorento is great value for money. Forget the third row of seats, drop to 17in alloys from 18s, lose the reversing camera and the Xenons, and save yourself another R30 000. You’ll still have the 4WD capability, potent diesel and the auto box. That’s a bargain. New Sorento is a quantum leap for Kia, making it a brand you’d be proud to have in the driveway.