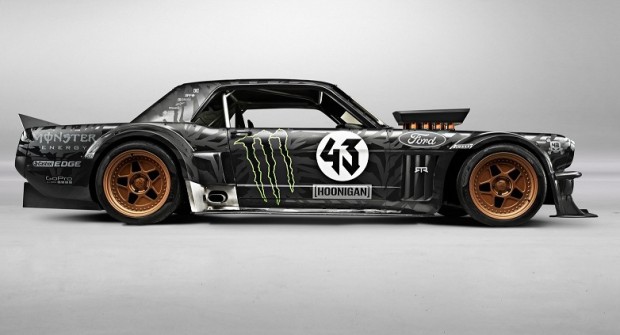 Ken Block’s Gymkhana Seven car has been unveiled at the Sema custom car and tuning show in Las Vegas. The days of KB’s Subaru WRXs and Fiesta STs appear to be a thing of the past. The Gymkhana and Rallycross star will pilot an awesome 630kW re-purposed 1965 Ford Mustang notchback.

This is no rear-wheel drive hooligan, mind you; RTR and Hoonigan have collaborated to give it a one-off six-speed Sadev all-wheel-drive transmission, making it what they like to call the ‘Hoonicorn’. The custom built ‘65 Mustang features a 6.7-litre Roush Yates V8 producing the necessary 630kW/975Nm to keep 18-inch Pirelli Trofeo R tyres spinning all day long.

As impressive as the performance promises to be, the car’s styling with its detailed carbonfibre fabrication around a tubular frame chassis, and stereotypical Gymkhana decals, should garner it plenty of attention at the Sema show and when it debuts in the next Gymkhana video.

‘This is a project that I’ve been working on for two years, so to see it fully come to fruition and be able to drive it was absolutely amazing,’ said Ken Block. Described by some online pundits as the ‘batsh!t retro-modern all-wheel drive Gymkhana Seven Ford Mustang,’ you can watch a behind the scenes video from Block’s Gymkhana Seven shoot right here: