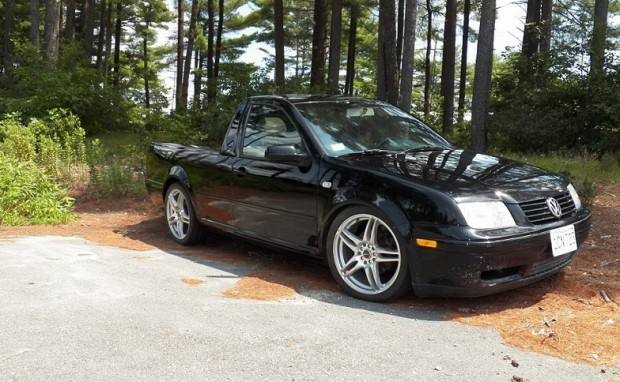 If you’re the type of person who loves a sensible Volkswagen Jetta but also yearns for the rugged practicality of a bakkie, there’s a kit car manufacturer in the US who can make your dream car a reality. Mark Smith from Smyth Performance (we’re not sure where the ‘y’ comes from, fyi) has created a simple bakkie conversion for a fourth-gen VW Jetta. Who’da thunk it, eh?

Smith has run a number of small car mod concerns over his twenty-plus years in the business but his third company, based in Massachusetts, could prove to be his most noteworthy. Focusing on easy to build cars using existing platforms, his founding principle for conversions is fully utilising the modern German engineering of Volkswagen.

The fourth-generation Jetta has a range of TDI, 1.8T and VR6 engines, and VW’s stellar safety features to create a solid base for a bakkie conversion. Everything that makes the car work remains but Smyth Performance designs a system of panels and seven tubular subframe assemblies to reinforce the rear, and glassfibre panelling to transform it into a small bakkie.

The result is a carlike drive but with a 1.8 metre long load bed which can be fitted with an aluminium (or ‘aloominum’, as the Americans say) load bed for aesthetic appeal. The conversion costs $3 500, or roughly R38 000.