Honda NSX spied at the ‘ring 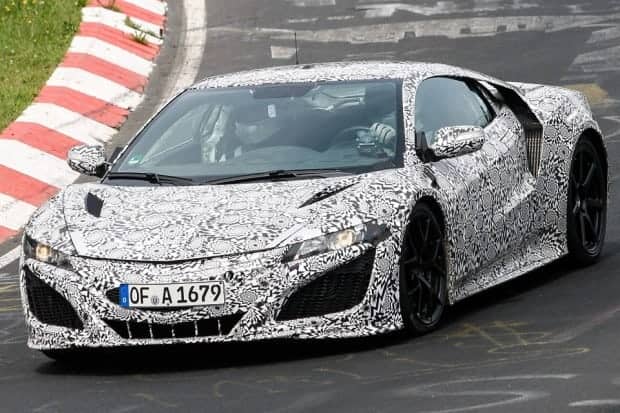 The production-ready Honda NSX may still be a year away from official debut in 2015, but since the NSX Concept’s debut at the 2012 Detroit Motor Show we can’t help but get excited over the auspicious return of the famed halo model.

This is the first time we’ve seen the ‘all-new’ NSX prototype (Honda had a go at a front-engine V10 NSX back in 2008) testing around the Nurburgring and courtesy of the spy video below we can see our high expectations don’t appear to be misplaced.

You see, Honda don’t exactly have a sterling record of bringing attractive concept cars to full production readiness without losing the plot along the way, but this NSX looks fast and poised around the track and just as good looking as the NSX Concept, even with the unflattering camouflage.

More speculation abounds about the drivetrain Honda proposes for the NSX. Out is the big V10 of the abandoned NSX circa-2008 and in its place is a three motor hybrid SH-AWD transmission with a twin-turbo V-TEC V6 engine creating the fireworks, while the electric motors are powered by a lithium-ion battery and topped up with regenerative braking. But will all the complexity work?

Honda claim the mid-mounted setup mated via a dual clutch gearbox to the Sport Hybrid SH-AWD (Super Handling All-Wheel Drive) with the electric motors capable of delivering both positive and negative torque to the wheels, will make a Nissan GT-R’s all-wheel drive system seem prehistoric. The NSX is also slated to have a very favourable power-to-weight ratio too, which will stand it in good stead against a heavyweight rival like the Nissan GT-R.

Despite punters only being wowed by the NSX Concept car and not even seeing the real one in the metal, some European customers have already been placing deposits on the new NSX. The previous NSX was a Japanese legend for sure, but Honda only shifted 18 000 NSX units globally in its 15 year lifespan – or 1 200 per year. More importantly than the numbers, let’s hope the new NSX – while being a highly complex and forward thinking machine – is just as good as the original.