NOW THAT FORD have at last confirmed they’ll be bringing a limited number of the Focus RS to South Africa, we thought it good time to revisit our exclusive driving impressions of Ford’s 224 kW hatchback performance king, which appeared in our September 2009 edition of topCar.

Every brand needs an icon and we can’t think of a better one to boost Ford sales and remind people what RS means even if it isn’t particularly well-known in a local context. For the record, it stands for Rallye Sport. Date of birth: mid-1970. First-born: Ford Escort MkI RS1600. One hundred of these came to SA but weren’t all sold in that form. More recently the RS moniker is remembered with the MkII RS2000, available here from late 1978 to early 1980.

Truth is, South African car guys definitely know what RS stands for and a few minutes browsing internet forums shows just how badly local fans of the Blue Oval want to see the Focus version. Their enthusiasm may however be tempered by a price on the wrong side of R500 000 and maybe closer to R600 000. 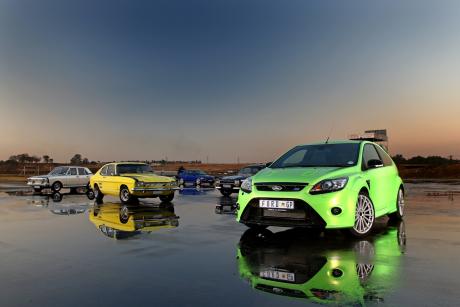 The other burning question, concerning the torque steer which blighted the previous generation Focus RS (never available here), is answered about halfway into a quick pedal out to the west of Joburg in this ultimate green example, the only one in the land. The test is a telling one for a powerful turbo front-driver: gear it back a ratio or two to make sure there’s boost on hand and then squeeze the loud pedal.

The instant I do so we shoot out from behind the car we’ve caught and whoosh past, slotting in ahead equally quickly in what is essentially a double lane change. Itâs a matter of seconds, but is a seminal moment. Yes, there is a hefty tug as lock is applied and torque hits the tarmac simultaneously, but no three-way dog-fight between driver, steering wheel and road wheels at any point in the right/left, left/right sequence. Each time the car finds the exact rectangle of tarmac I was looking for. As we power down the road in the general direction of Lanseria, I mentally tick the box marked ‘Sorted’.

But it has to go round corners too, so I seek out a 90-degree left that can be negotiated in third gear. We arrive briskly and I go down the gate of the six-speeder, turning in fairly gently but adding power enthusiastically at the same time. Once again the loads through the thick rim increase suddenly, but thereâs no unruly left/right ducking and diving, just an overwhelming sensation of forward thrust as the 235/35 Contis bite into the coarse tarmac and slingshot us out of the corner. No scrabbling for grip, no hint that the inside front tyre is attempting to relinquish contact with terra firma. I mentally tick the box marked ‘Excellent’ under the ‘Traction’ subheading.

Donât get me wrong. This isnât some docile, unassuming shopping trolley and early indications are that it requires finesse and sensitivity from the driver if it is to be fully rewarding. Cars like this don’t enjoy ham-fisted inputs, but the bottom line is that it is easy to drive despite the 224kW/440 Nm ratings. That makes it the most powerful hatchback ever available in this country, by the way.

Who would’ve thought, even a few years ago, that a car could be successfully pulled along by so much? But technology moves on and the secret to the drivetrain integrity and refinement is the RevoKnuckle, a complex hub and suspension layout which allows for geometry which doesn’t result in unwelcome steering feedback and also allows the actual strut assembly to remain stationary while only the wheels swivel. Think of it as a hybrid combining double wishbones and a traditional McPherson strut.

In addition, the RS gets a Quaife limited-slip differential, working on a mechanical torque-biasing principle, claimed to be tougher, faster-acting and lower in maintenance than viscous coupling types.

These suspension changes go some way to explaining the 40mm increase in track width and use of 19 inch wheels precisely the features that give the car its presence. It’s not so much threatening as fit-for-purpose menacing. The RS looks like a beautifully integrated package from the outside, with a visual effect that capitalises fully on the current Focus ST’s sharp-edged styling.

Ford uses the word ‘kinetic’ to describe its current design language and the RS does certainly look like a car on the move. As well as pumped-up arches, the ground effects addenda are there, including a radical rear diffuser, front splitter and a substantial wing, all highlighted in black.

Shared with the ST is the 2.5-litre five-cylinder Volvo engine, substantial reworked in this application to make 38% more torque and a full 50% more power. Not much has been left unchanged, to the point where Rallye Sport engineers suggest that it is hardly the same engine at all.

With maximum boost climbing from 1.2 to 1.8 bar from a larger hairdryer, they may just have a point. Most remarkable is how strongly the engine pulls from low down and how rapidly it responds to the throttle. In fact it feels almost oversensitive initially. My first tentative prods cause the car to lunge forward and then decelerate rapidly, almost as if there’s a highly-strung competition powerplant under the bonnet with way too much compression for road use.

But you soon feel comfortable exploiting it, a fact made all the more appealing by the ease with which the torque reaches the tarmac. Stretching the Focus legs on the N14 suggests plenty of top end, but you donât always feel the need to max it out in each gear though it certainly doesn’t feel like the power tapers off rapidly after the 6 000rpm power peak. Ford claims a top speed on the other side of 260kph and while we don’t reach that kind of velocity, our brief experience suggests that owners can look forward to a car that tracks straight and true at any speed.

It should stop too. Thanks to the 8.5J x 19 15-spoke alloys there’s space to fit 336mm ventilated discs in front, along with uprated callipers. The brakes feel very reassuring with instant bite and a pedal feel that allows for accurate modulation.

And that’s the chief appeal part of the RS package: it gels. Brakes, steering (even though electrically assisted), gearshift, clutch and throttle harmonise to leave a tangible sense of pleasure at all the nerve endings. Precisely what, almost 40 years ago, made the RS1600 an equally outstanding performance car of its era.

What would you pay for a Ford Focus RS? Close to R600k if it included the Luxury Pack One goodies on this car, such as automatic headlights and wipers, rear park distance control, key-free start, tyre deflation system and auto-dim rear view mirror? Maybe a bit more if you spec touchscreen DVD navigation? It’s meant to be a relatively affordable performance car, cost being cited as one of the reasons why they worked so hard at perfecting the FWD layout. Cost and weight.

Well, how about a Million smackeroos? That’s a one followed by six zeroes, remember. And that’s what one Ford fan offered me to park this very car in his driveway. Apparently no idle brag either.

Bad news for him is that this particular unit isn’t for sale; the good news is that negotiations are ongoing to get a handful for local consumption, despite the fact just 5 000 are going to be built internationally this year, most for left-hand-drive markets. Our man needs to keep his fingers crossed too, because a couple of weeks ago Colin Lazarus, patriarch of the massive Lazarus Motor Company in Centurion and owner of this car, was talking about 100 cars being possible, but had dropped that figure by more than half as we signed off these pages.

So for that man with a fat wad of cash burning a hole through his pocket clearly the Ford equivalent of rugby’s Player 23 it’ll be a good thing if the thumbs-up is given, because he will have saved himself R400k. If the answer’s no, then he’ll be doubly disappointed at missing out on the chance to own a performance icon.