Maybe it’s because the Superboss and I were contemporaries in my early days as a motoring writer, but the raucous little Opel holds a special place in my heart – as it clearly does for guys like Chris Davison who have dedicated many waking hours to ensuring its survival.

I thought that I had died and gone to heaven when my then editor, Geoff Dalglish, handed me the invite to the launch of the first 16-valve Kadett, which took place at Zwartkops and included laps of the track with some of Opel’s top racers. I vividly remember being chauffeured by Graham Blankfield in a Stannic Group N twolitre eight-valve Boss, an experience remarkable for the fact that not once in the lap did he brake with his right foot.

The first 16-valve Kadett became known as the Big Boss, but there was more in store and less than a year later the Superboss arrived. It was unleashed at Tarlton with the press pitted against each other down the dragstrip. Dalglish held tightly onto that invite, possibly because the spectacularly sexy Michelle Bruce (Miss SA 1989) was in attendance. She proved to be pretty handy away from the lights apparently, turning in low 16-second runs over a quarter-mile.

Any drag racer will tell you that a 16 for a four-cylinder, normally-aspirated front-drive production car is quick, but street drags had nothing to do with the birth of the ’Boss. Nope, it was simply about the maxim that what wins on Saturday sells on Monday – and in those days Delta pinned its marketing on production car racing.

Two names were key to the success of the Superboss but only one got the glory. It underpinned the track career of Mike Briggs and he went on to win epic battles against arch rival Tony Viana in a BMW 325iS. But the mastermind behind the Superboss was Rolf Mentzel, then Delta’s manager of product engineering and quality assurance.

Mentzel headed overseas with an extensive shopping list after being instructed to make sure Briggs retained his hard-fought ‘A1’ race number at the end of the 1990 season. This was in the face of the looming challenge of the lightweight iS and the rumoured (and ultimately stillborn) Spitze Golf. He visited tuning and suspension specialists Irmscher, camshaft expert Schrick as well as Aluette, who made some very tasty lightweight wheels.

To shorten a long story, Mentzel returned with hot cams, springs, ventilated discs (from the Opel Omega sedan) and wheels with a distinctive five-spoke pattern and a powder-coated anthracite finish. What he didn’t find overseas was a suitable limited-slip diff or an exhaust system.

André Verwey, already acclaimed as a brilliant engineer and innovator, was approached to build a differential and he came up with a design which allowed for two settings – road and track. Needless to say, all cars were sold with the higher preload though dealers could theoretically change it to the more forgiving position if the customer so desired. The same applied to the camshaft phasing, which could be set to give less overlap and a smoother idle. But a Superboss without a lumpy, slightly fluffy idle wouldn’t be a Superboss.

The exhaust was developed locally after ‘many long, long nights’ on the dynamometer, recalls Mentzel, with the objective being to get a power curve free of dips and gullies plus plenty of torque lower down. Another key player in this process was a German named Rolf Deubel, whose company Promotec was one of the pioneers of chip tuning.

By the time they had finished burning the midnight oil and produced a pile of tested and discarded exhaust systems, they had what they were looking for: curves smoother than a baby’s posterior and about 132kW of useable power.

Road versions were signed off with 125kW at 6 200r/min and 228Nm at 4 800, and with an on-the-road mass of a tonne (give or take) it had a very healthy power to weight ratio. It was that magical Verwey diff that ultimately gave the car its character though, and it is hard to think of another front-driver that felt so direct or put its power down so well. It was a completely different driving experience compared to a normal Kadett, and Briggs recalls spinning a number of times on his first time out at Aldo Scribante.

Strangely enough, the car you see here was inexplicably sans the LSD when current owner Chris Davison bought it in 2001. He is only the fourth owner and now runs a Quaife differential and the powerplant displaces 2.1 litres (achieved by using pistons from a Nissan 300ZX). But other than round (rather than square) tailpipes this car is 100 percent original as far as visuals go.

Which begs the question, how would you spot a fake Superboss? One way would be to run your hand around the inside of the wheelarches and feel whether they have been properly flattened to cope with the combination of a ride height dropped by 20mm and the wide tyres. Back in 1990, a 195/50 VR15 was considered big. It was only after the first cars came down the line that the clearance issue became apparent, and later ones had the arches rolled before being painted. You could also remove the carpet and check whether the sound-deadening material has been left off. 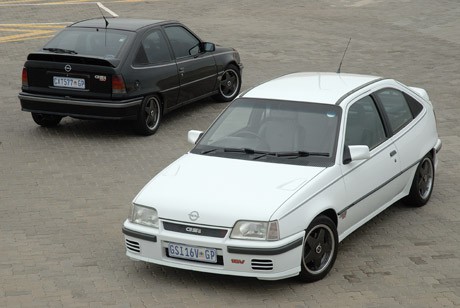 But the surest test is to look at the VIN plate: if ‘S’ appears at the end of the string of letters that prefix the actual chassis number, you’re on the right track as this is difficult to forge. An authentic Superboss also has a hand-ported Cosworth cylinder head – or so Delta led us to believe at the time. As it turns out, somewhere between 20 and 50% were fitted with these fancy heads, the rest equipped with a less well-finished Kolbenschmidt casting that only an expert can tell apart from the Cossie version.

The Superboss was one of the last truly hardcore South African homologation specials, and air conditioning was extremely rare. Bearing in mind that the back windows didn’t open, it’s easy to understand why the metallic blue car driven by Mentzel and later owned by TV presenter Hendrik Verwoerd was so equipped. Just for the thrill of driving, the rest of us were prepared to endure the pure hell of a black Superboss in mid-summer.

We were a tougher lot then, back in the days when sex was safe and motor racing was dangerous … and girls like Michelle Bruce had big hair.