HISTORY SHOWS THAT the GSM Dart was the most successful South African sports car design, but it wasn’t the first. That honour goes to the car shown here, the Protea, which in terms of reaching showroom-readiness predates the Dart by a few months. From April 1957 you could buy one for £595 from GRP Engineering in Crown Mines, Johannesburg.

Although fiberglass as we know it was invented just before World War II it was really only in the 1950s that it became popular for building low-volume sports cars, the most famous of which is the 1953 Corvette. Possibly as a result, two groups of South Africans one in Stellenbosch and another in Joburg almost simultaneously starting working on similar projects, namely moulding tight-fitting bodies over a minimalistic spaceframe chassis and invariably using Ford drivetrain components.

Unlike the Dart/Flamingo, the Protea wasn’t a commercial success and a mere handful were built, so these machines are rare and valuable indeed. Zwartkops Raceway owner Peter du Toit has one in his garage of 40-odd race cars, and because it is as South African as biltong, it deserves a place in our pantheon of local heroes. 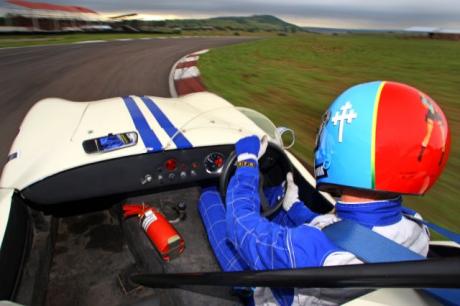 That’s how I came to be sitting in a tiny car, with tiny doors, tipping the scales at little more than 600 kilograms. Even the seat feels small and flimsy, unlike the all-embracing sensation you get from most modern racing furniture which hugs you all the way up to your shoulders.

The roll hoop and thanks heavens there is one is not quite tall enough to clear my 185cm frame, so theoretically it’ll be the top of my helmet which makes contact with the tar before the metal does. Still, it’s more than AJF Tony Fergusson had for protection in the event of a roly-poly accident when he debuted the Protea in the 1820 Settlers Handicap on March 1, 1958. In fact this car is essentially a replica of Fergusson’s car from that race, right down to the blue stripe over the bonnet and the race number: 21.

The interior is as Spartan and unadorned as the exterior, with a mismatched speedometer and tachometer, both of which look perfectly appropriate in a car from the 50s. A later generation water temperature gauge lives above the driver’s right knee and in the centre of the black, padded facia is a start button, sizeable oil pressure light, and toggle switches for the indicators and ignition. The engine kill switch is further across, almost in line with the cowling-mounted rear-view mirror.

Pressing the rubber-encased start button elicits a churning from under the bonnet and like most old Ford starters, a couple of attempts are required before the gubbins linking it and the flywheel ring gear meet and greet. The engine happily settles into a muted idle and blipping the throttle only elicits a wheezy chuffing, which doesnât exactly shout high performance.

But of course this is 2010 and I’m sitting in a 50-year-old car, though the 1.5-litre reverse-flow Anglia engine and its four-speed box is of a later vintage than the platform. Originally, this car probably wouldâve had a 1 172cc side valve engine with somewhat less than 40kW available, but today I could possibly have closer to 50, or would have if a persistent misfire backed off long enough to allow the full complement of horses to be deployed.

Itâs no ball of fire and one of those cars you need to drive on momentum â scrubbing off even one or two kilometres too much speed in the braking area is to be avoided at all costs because youâre never going to get it back. Unfortunately the carâs stoppers arenât the best, with the end result that I repeatedly arrive at apexes faster than planned, which forces me to negotiate corners in lurid slides, messing up the exit speed in the process.

It is hard to say whether the brakes drums all round, remember â are actually that bad because part of the problem is an engine which refuses to idle at a normal speed. Once warmed up the revs sit determinedly at 1 800rpm, resulting in a car still actually trying to pick up speed while I’m trying to lose it. Despite the low mass, this taxes the brakes beyond their ability and every slow corner is a case of desperately standing on the pedal (which means any attempt at subtle modulation and trail-braking past the turn-in point is out of the question) and hoping for the best.

What a shame, I think to myself, as I once again steer out of the kitty litter, because the car feels like it has inherent handling poise and would benefit from being driven in a precise, measured manner. The steering is quite light but lively and accurate enough considering a steering box rather than a rack is employed, and the gearshift and clutch require little effort.

The heavy mechanical bits are all packaged well behind the front axle so responses are swift and there’s a palpable eagerness in the way it tackles a corner. The car feels utterly dependable from the moment steering lock is applied, twitching a little on its modest rubber, but in a way which translates into lots of seat-of-the-pants information in addition to whatâs being telescoped along the steering column. As far as handling goes, it actually feels like a race car.

The gear ratios aren’t perfect, but there’s lots of torque from the mildly tuned engine so third and fourth are fine for Zwartkops mix of very slow and very fast corners. Top gear is called for through the fast right-hander before the climb starts at the end of the main ‘straight’, and because so little speed needs to be scrubbed off, a brush of the brake pedal and a twitch of the wheel is enough to get it set up for an early apex. This is where the car is at its best and while not quite capable of powering through in the true sense of the word, it is satisfying to feel the speed carry up the hill as the car floats to the outer kerb.

If I could get a complete lap in without outbraking myself at least once, I could happily drive this car all day. It rewards a deft touch and while the numbers on our performance table donât exactly make for scintillating reading, they confirm that a well-balanced race car which is fundamentally easy to push close to the limit can still turn in a decent lap time.

Despite a couple of ‘moments’, this rare machine was handed back undamaged, and once its foibles are sorted, maybe there will be a chance to experience what sports car racing was really like in the 1950s â and get a proper taste of ‘flower power’.