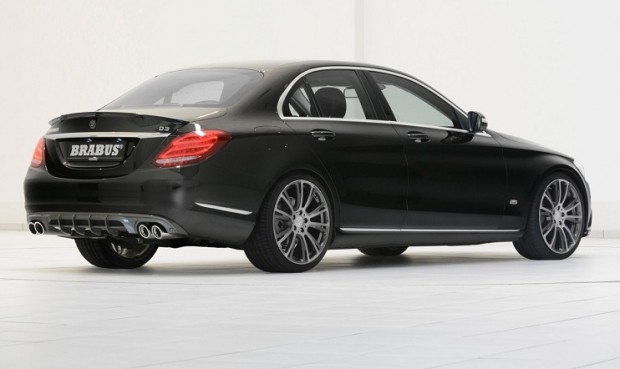 With fans of the three-pointed star anxiously awaiting the next Mercedes-Benz C63 AMG – rumoured to gain a version of the twin-turbo V8 from the new AMG GT sports car – Mercedes-Benz mega-tuners, Brabus, decided to have a go on the new C-Class sedan.

The Brabus package for the Mercedes-Benz C-Class sedan is pretty extensive and encompasses everything from exterior body parts, to wheel upgrades, to re-trimmed interiors and fruity performance upgrades.

More than that, compared to some aggressive Brabus packages of the past, this C-Class actually comes across as subtle and understated. The wheels are upped between 18- to 20-inch sizes and this can be complemented by Bilstein shocks that lower the suspension a few mm.

Familiar and immediately identifiable Brabus ‘B’ logos are emblazoned from tip to tail and there is a new front grille with improved cooling and a front splitter that combines with a small rear spoiler/diffuser to reduce lift at speed.

The plastic lower side skirts are also part of the exterior package and an obligatory tuning addition are quad exhaust outlets. The rear end looks very tidy compared to the slightly pinched effort of the regular C-Class. On the inside, Brabus has re-trimmed the interior with Alcantara leather and there are sporty aluminium pedals, joined by Brabus floor mats and kick plates.

While the C63 AMG will gain the potent new eight-cylinder AMG power plant, Brabus has set to work to enhance the existing four-cylinder engines. The C200 petrol is boosted by Brabus’s PowerXtra B20.2 performance kit from 135kW to 167kW and that means a new claimed zero – 100kph sprint time of 7.0sec and a top speed of 240kph.

The C220 Bluetec diesel starts out with 125kW and 400Nm of torque but after Brabus tweaks it, it produces 170kW and 450Nm of torque, resulting in the same sprint and top end performance figures as the Brabus C200.

Brabus say the plug-and-play engine electronics won’t compromise engine durability because the performance-enhancing mapping only operates when the car’s parameters are warmed up and ‘in the green.’

Sounds very sensible from the tuners, but all we know is we can’t wait for the V8 C63 AMG. Here is short clip of the Estate version hustling round the Nurburgring: