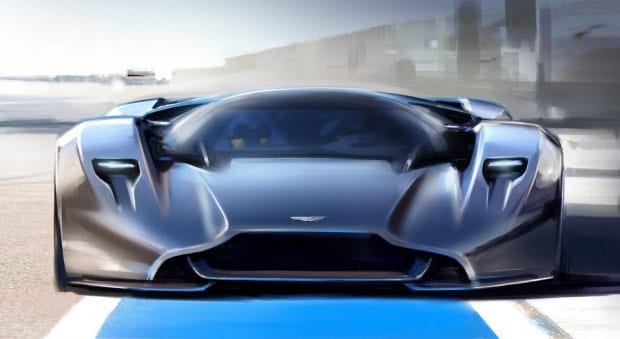 Aston Martin’s DP100 Vision Gran Turismo supercar was unveiled this weekend at the 2014 Goodwood Festival of Speed. The radical concept car joins similar virtual concepts from Mercedes-Benz, BMW, Volkswagen and Nissan, and gamers will be able to drive the mid-engined V12 when it’s released on Gran Turismo 6 in the coming weeks.

As for the naming, DP stands for Design Prototype and this concept car is destined to remain a digital-only experience for now, but it is the real McCoy – the concept was designed and modelled by Aston Martin’s Gaydon design studio and design director, Marek Reichman, claims that this car will influence future Aston Martin road cars.

The dramatic Aston features a 6.0-litre V12 mounted amidships and it’s breathed on by a pair of turbochargers, swelling power to a heady 600kW. This is not the first time Aston has built cars for the GT gaming franchise; the One-77 hypercar is separately available in the latest Gran Turismo 6 game.

Aston Martin’s Reichman says this is not only a digital flight of fancy and details such as the ‘blade’ inspired rear lamps will trickle through to production cars. ‘The importance of this project should not be underestimated,’ he said. ‘As with the CC100 Speedster Concept, many of the design cues visible in DP100, such as the light-blade rear lamps, could also feed through into future sports cars that we’ll launch in the offline world.’

Kazunori Yamauchi, the creative genius behind Gran Turismo, said: ‘When I first came face to face with this car at the Aston Martin HQ in Gaydon, I was at a loss for words seeing the level of perfection of its design. ‘While it is clean and classy in design, it is also very emotional. Not only that, but there was this future Aston Martin in front of me that was so detailed, it could be released on the market pretty much as is.’