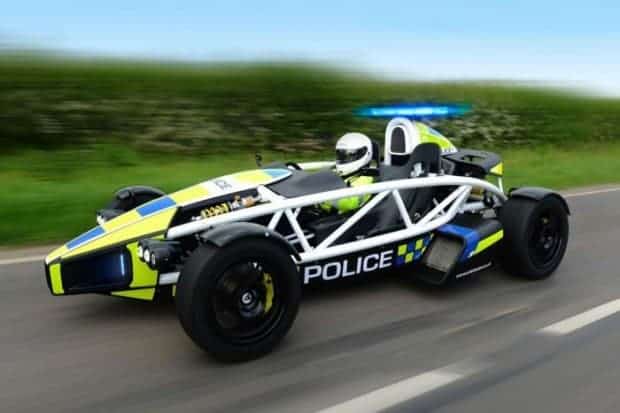 You can probably blame the Dubai police department for starting this ridiculous super-police-car trend, but now you can add Somerset-based speed freaks, Ariel, to the list of offenders as well – at least this one if for a good cause.

Not that we’re complaining or anything, because if the police did have exclusive use of these supercharged pursuit cars, most hot pursuits would end before they even began. How the cops would carry more than one crook back to the police station, however; is any ones guess.

Avon and the Somerset Constabulary in the UK have taken delivery of an Ariel Atom 3.5R fitted with the supercharged 2.0-litre Honda engine good for 260kW. Even with the addition of police livery, lights and sirens, Ariel director, Simon Saunders is confident it’ll still hit 100kph in 2.5 seconds.

Naturally, the police aren’t actually going to use the car on a daily basis because this is all a publicity stunt.  Saunders says he’s involved with the Somerset Safer Rider campaign to raise awareness among bikers, who represent one in five people killed on British roads.

And two-thirds of bikers who crash are aged between 35 and 55 and riding bikes over 125cc. ‘Our business is about going fast, very fast, but there is a time and a place,’ said Saunders.

‘The Atom is designed to be driven to a race track, where you can drive to your limits in safety and in a professional environment designed for the purpose. The road really isn’t the place to explore your or your vehicle’s limits. There’s always one certain loser in a motorcycle collision and that’s the motorcyclist.’

In our opinion, South Africa could benefit from a similar motorcycling safe rider campaign, and we could certainly benefit from a supercharged Ariel Atom police car to hunt down all our bad guys. What bizarre one-off police car would you like to see on local roads?