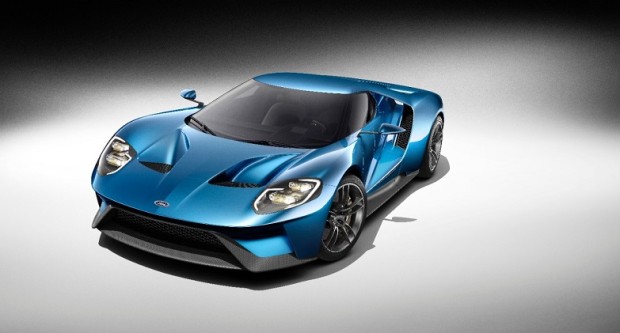 Ford has rocked the Detroit Motor Show by revealing its all-new Ford GT supercar. Only lightly teased in the weeks building up to the 2015 North American Motor Show, Ford says the GT supercar celebrates the 50th anniversary of Ford GT race cars placing 1-2-3 at the 1966 24 Hours of Le Mans.

Surprisingly, the Ford GT won’t be powered by a supercharged 5.0-litre-plus-V8 something as the previous Ford GT from the ‘naughties’ was but rather Ford’s ultra-efficient twin-turbo V6 EcoBoost engine. In fact, the firm says it is the most powerful EcoBoost production engine to date producing more than 445kW.

Don’t worry if that doesn’t sound like enough power, because Ford says the new GT redefines light-weight construction with its new carbonfibre passenger cell and aluminium front and rear sub-frames. And it has sleek aerodynamic properties to harness every kW and Nm.

The all-new GT is rear-wheel drive, with a mid-mounted engine, naturally; and it will exhibit one of the best power-to-weight ratios of any production car. Aerodynamic efficiency is at the heart of its design, actively reducing drag while aiding downforce and stability. From the optimum tear-drop shape to its aircraft-inspired fuselage and visibility-enhancing curved windshield, every slope optimises downforce, while a fully active rear spoiler is deploying and adjusting its height and/or pitch angle depending on conditions.

Infusing race-proven technology that keeps company with exotic supercars like Lamborghinis and Ferraris, the Ford GT goes into production in 2016, and looks set to turn the supercar world on its head. We wait with baited breath for the official word on the Ford GT’s performance specs.