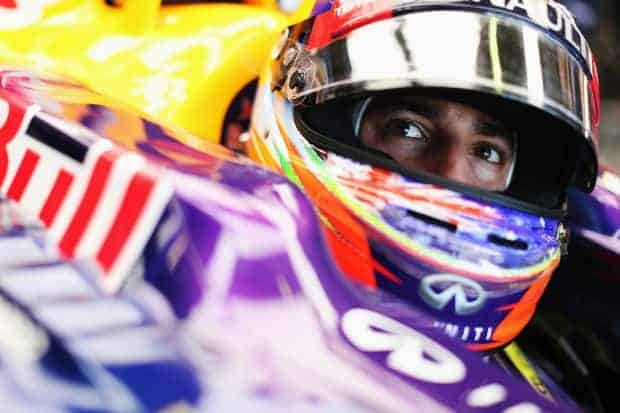 Sebastian Vettel insists it is too early to say his new team-mate Daniel Ricciardo is better than Mark Webber.

Ricciardo, who like Webber is also Australian, has already made Vettel’s life difficult in 2014, and in Bahrain the quadruple world champion even had to obey team orders.

‘Daniel is quicker than you,’ Vettel’s engineer told him. ‘Let him by, please.’

German Vettel said he complied with the order because ‘I realised that he was just faster. It would have been pointless for me not to (move over),’ he is quoted by Germany’s Auto Motor und Sport

But does all of this mean that, at the very least, Ricciardo is better than the recently-departed Webber, a winner of nine career grands prix?

‘It would be unfair to say that after three races,’ Vettel insists.

‘Daniel certainly is doing his job very well, but a fair comparison is very, very difficult,’ he added.

There is another theory: perhaps Vettel is simply struggling to adapt to Red Bull’s new and unfamiliar place in the pecking order.

‘Sebastian is not used to driving cars that are not perfect,’ driver turned broadcaster Martin Brundle noted. ‘Daniel is.’

The Italian newspaper Tuttosport agrees: ‘Vettel shows the best of himself when he’s driving alone at the front. He is not used to fighting in the bunch.

‘Dealing with the competition of Ricciardo is a new thing for him.’