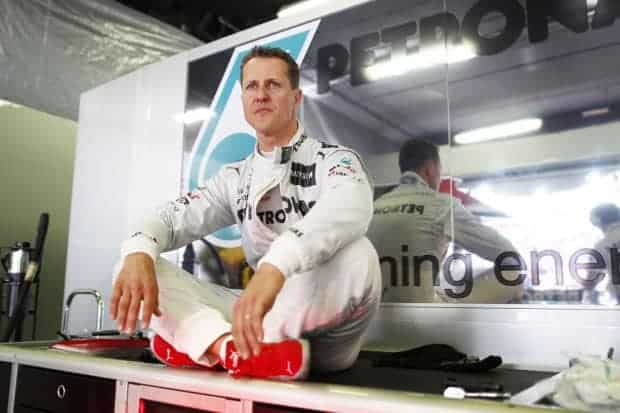 Doctors have urged caution following Monday’s official news that Michael Schumacher is no longer in a coma.

Lewis Hamilton summed up the mood of almost the entire world when he hailed the statement issued by Schumacher’s management as ‘amazing news.

‘I’ve been trying to keep an ear out for what’s going on but not really hearing much improvement,’ said the Mercedes driver. ‘To hear this is really encouraging.’

As well as saying the seven time world champion’s almost six-month coma is now over, Monday’s statement revealed Schumacher left the hospital in Grenoble for a ‘long phase of rehabilitation’.

It said little else, but warned of legal consequences should the media report further, including the location of Schumacher’s next destination.

But publications promptly claimed Schumacher, 45, was moved to Lausanne university hospital, a 30 minute drive from the family’s home in Switzerland. The hospital confirmed the news.

The media also began to quote the opinions of medical experts, like Oxford university neurosurgery professor Dr Tipu Aziz, who told AP news agency it is clear the former Ferrari driver will suffer “long-term side effects”.

‘With rehabilitation, they will try to train him to cope with the disabilities that he’s got to achieve as much life function as possible,’ he said.

‘If he’s had a brain injury, he may have weakness in his limbs secondary to loss of brain function. He may have problems with speech and swallowing.’

Bild newspaper, claiming that Schumacher cannot yet talk, also reported that the rehabilitation ‘could take months if not years’.

‘But there are hopeful signs,’ British rehabilitation consultant Dr Ganesh Bavikatte is quoted by the Telegraph

‘He is physically fit, he is relatively young and I assume he did not have many pre-existing medical conditions.’